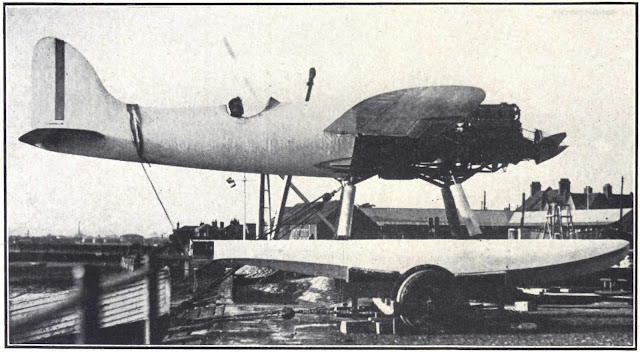 The Supermarine S4 was an R J Mitchell design for the 1925 Schneider Cup contest, held in Baltimore. It was a radical departure from the previous Flying Boat biplane designs, being an all-wood monocoque monoplane with externally unbraced wings, to which a steel framework was constructed ahead of the wings to attach the engine. It set a new World speed record before the event of 227 mph. Unfortunately during the elimination trials, the plane crashed into the sea and was too damaged to continue. The design was perhaps a bit too advanced, the crash was attributed to wing flutter. The race was won by Billy Mitchell in the Curtiss racer, at an even higher speed than the one set by the S4. Image above, engine tests at the Supermarine factory.

The S4 being launched at Baltimore.
Posted by Mister G at 10:51 PM