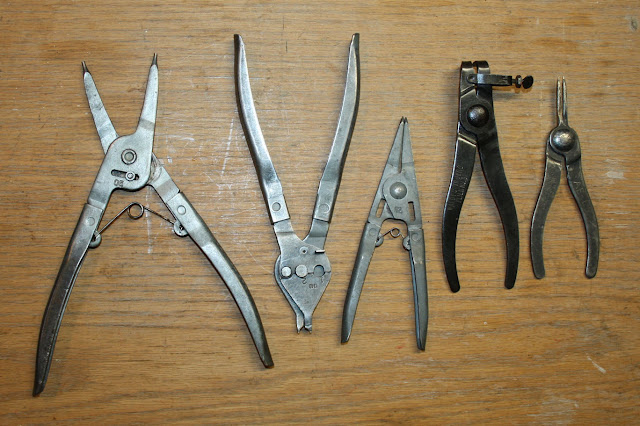 Above, my five pairs of Waldes-Truarc circlip pliers.  The include a Plier No. 1: 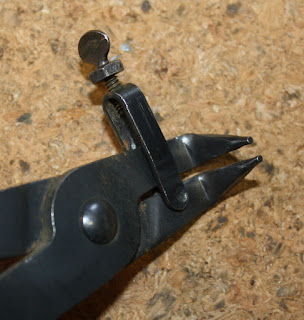 The bottom two in the image below are quite clever, designed to be used for both internal and external circlips by changing the pivot points: 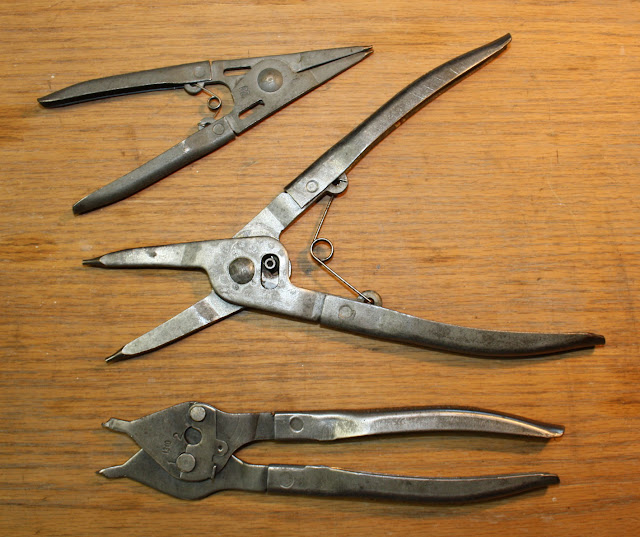 The story goes back almost a century. Hugo Heiermann, a German engineer working for a locomotive company, observed that traditional methods of securing a wrist pin in a piston would sometimes permit the wrist pin to move sideways and damage the cylinder.  In 1927, he applied for a US patent for a cylinder bolt locking device, basically the first retaining ring. The US patent was granted in 1930. 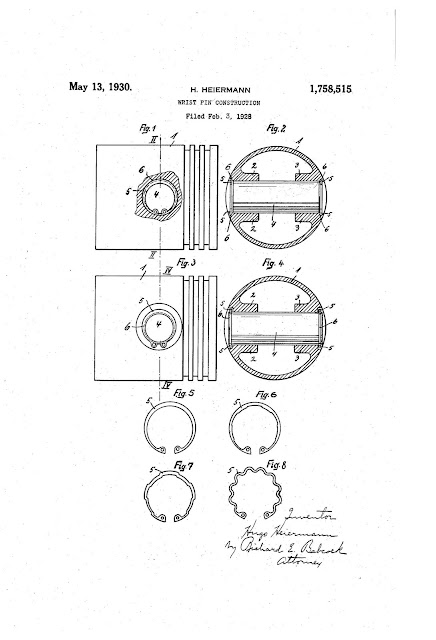 The Seeger company, founded in Frankfurt, Germany in 1917 by Willi Seeger to sell transportable cylinder drilling machines for locomotives, began to market these fasteners which ultimately became known in Europe as "Seeger rings". Another German metal stamping company, Hugo Benzing GmbH & Co. KG (founded in 1933), also made retaining rings.  In 1938, an agreement was made between these two companies and Ludwig Bluth and Richard Hans to manufacture and exploit the American patents within the United States. At around the same time, the War Powers Act put in place the National Aircraft Standards Committee. Bluth approached this Committee who led him to Waldes & Company.

Founded by Jindřich Waldes in Prague, the Waldes firm pioneered the use of snap fasteners for dresses in the early 1900s. This met with great success, and they opened factories in Paris, Dresden, Vienna, and Barcelona. They became established in Long Island City, NY in 1919, incorporating as the Waldes Koh-I-Nor, a trademark adopted in 1902 from the famous diamond. 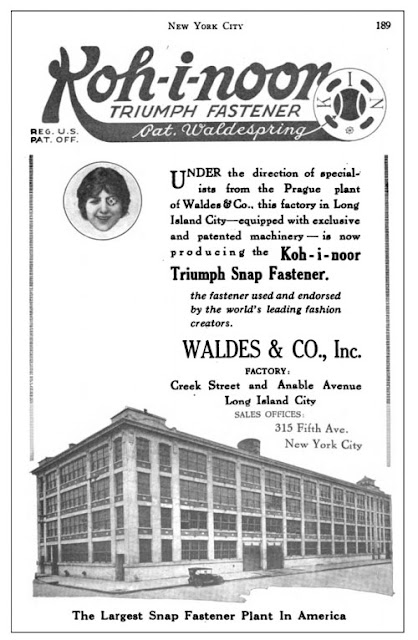 The world-renowned Waldes trademark, Miss KIN, (Koh-I-Nor) came about on a 1912 ocean trip when Waldes met Elizabeth Coyne, a red-haired American who playfully put an over-sized sample fastener over her eye like a monocle. 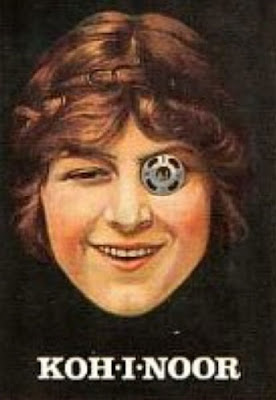 There's an apocryphal story that the Americans first encountered retaining rings on a captured German tank.  This is bunk.  Retaining rings ("circlips" in British parlance and "snap rings" to the Yanks) were most certainly being used in a variety of applications in the U.S. prior to World War II.   For instance, in the Fifth Edition of Bernie Nicholson's Modern Motorcycle Mechanics, first published in 1942, he states that the piston pins in the Harley-Davidson side-valve V-twins were held in place by lock rings.  These flathead models were introduced in 1930: 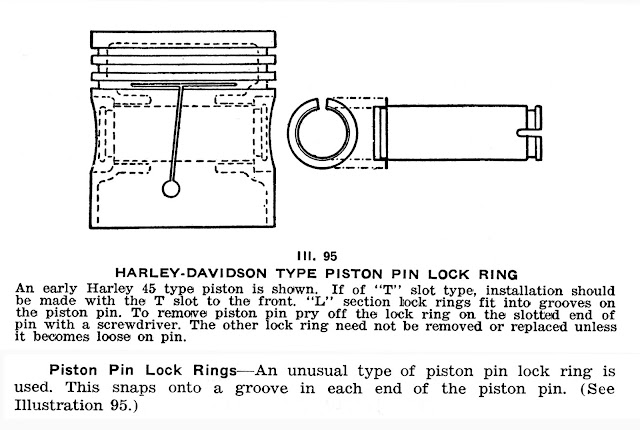 Similarly, my 1941 edition of Dykes Automobile and Gasoline Engine Encyclopedia states   "The full-floating piston pin works freely in the connecting-rod upper end and in the piston bosses, and is not anchored to either.  End motion is prevented by means of a retaining expansion lock ring in the piston boss.  This type of pin is a popular design in aluminum-alloy pistons."

In actual fact, following the outbreak of war, the patents of Seeger and Benzing were vested by the USA under the Alien Property Custodian Act. It was the selection by the National Aircraft Standards Committee that put in place the foundation for Waldes to make retaining rings for the US Military. Waldes was already making bomb fuses, 20 mm anti-aircraft shells, zippers and other products for the war.  In the 1940's, the company successfully began producing snap rings under the Waldes-Truarc name.

Back in Europe, the Nazis seized the Prague and Vienna factories. Jindřich Waldes was imprisoned in Dachau in 1939, then transferred to Buchenwald.  His family (who had fortunately relocated to the U.S. before the hostilities) paid a huge ransom to have him released.  In 1941, in very poor health, he was flown to Havana, Cuba, where he died, pretty much on arrival.  After the war, the Prague factory was nationalized by the Czechslovakian government.  That ended that part of the story.

Following the war, in 1958 the company's corporate name became Waldes Kohinoor Inc., with the Truarc Retaining Ring Division under its corporate umbrella. In the 1960's, an employee spin-off from Waldes, the Industrial Retaining Ring Co. operating as a sole proprietorship, occupied a niche market.  Then, in a full circle move in 1984, Seeger-Orbis in Königstein/Taunus, Germany (which had been itself acquired by SKF in 1970) acquired Waldes-Truarc. In 1995, the TransTechnology Corporation acquired the Industrial Retaining Ring Co. One year later, it then acquired the SKF Retaining Ring Group. TransTechnology further increased its leadership by acquiring in 1999, Ellison Holdings (UK) one of the last large independently-owned retaining ring manufacturers in the world.  In 2002, enter the Barnes Group, a Bristol, Connecticut-based international industrial and aerospace manufacturer and service provider whose origins dated back to 1857. Barnes bought Seeger-Orbis from TransTechnology (which re-branded itself as Breeze-Eastern in 2006). Finally, in 2009, Rotor Clip (founded by Robert Slass in Farmingdale, NY in 1957) purchased all of the assets of Truarc LLC, which is what the combined Waldes Truarc and Industrial Retaining Ring Corp. had become.  These assets included all patents, copyrights, registered trade marks — including the Industrial Retaining Ring (IRR) brand name and logo — as well as all machinery and quality documentation. The purchase also included all original Waldes Truarc tooling.  The Waldes Truarc factory at 125 Bronico Way in Phillipsburg, New Jersey was closed. It was huge:  below, from Google Earth: 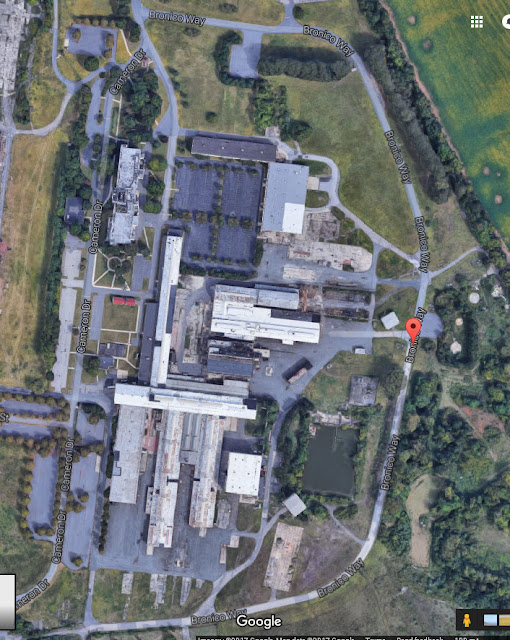 Lord knows what a little town like Phillipsburg (2010 population 14,655) is going to do with such a white elephant.

As for Seeger-Orbis, in 2013 it started its new operations in Tianjin, China.

The Waldes-Truarc's new owners, Rotor Clip, has a free e-book:
STILL MADE IN AMERICA- The Story of Robert Slass and his Contribution to US Manufacturing:
https://www.rotorclip.com/ebook/