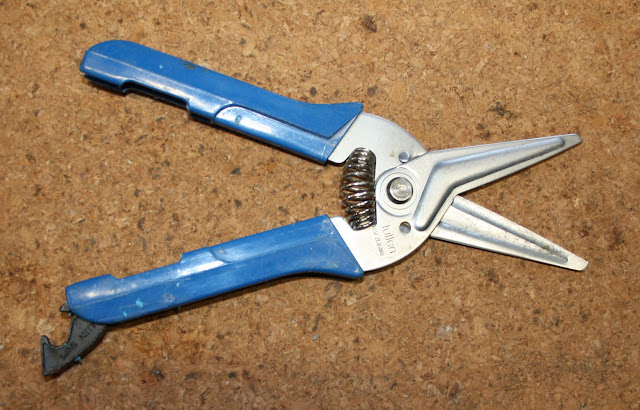 I recently found these scissors in a bin at a thrift shop.  They looked cheaply made to me and at first I put them aside.  On second glance, I saw that they were made in New Zealand.  That got me intrigued--we seldom see any Kiwi tools over here. 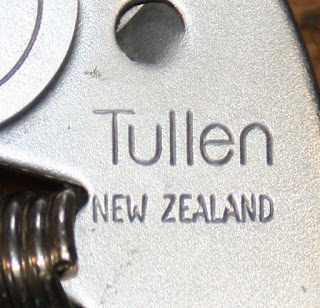 An internet search yielded a lot of people looking for them, and quite a few selling them for what seemed to me to be silly prices.  I had to wonder:  why such a big deal?

In 1972, John Hough was given a pair of scissors made in Argentinia, and asked if they could be made in New Zealand.  The shears had been made using a heat-treating process that enabled them to be made from mild steel.  Hough experimented with different heat treating methods, and wasted 20,000 or so pairs of shears before hitting on a better method by accident, applying for a patent for a process that reduced chipping on the blades.  The US patent was granted in 1976: 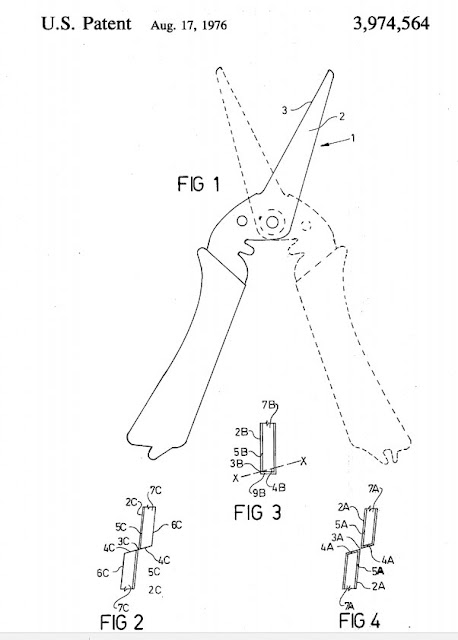 Hough's process allowed the steel to be punched out cheaply and then heat-treated, requiring no sharpening.  The edges were slightly roughened by their time in the press, which made them grip material more tightly. Because the blades were hardened, they could be made to bear more strongly against each other, improving their cutting action. Other patents followed. Peter Davies improved on the details, such as adding a catch at the bottom to lock them in the closed position: 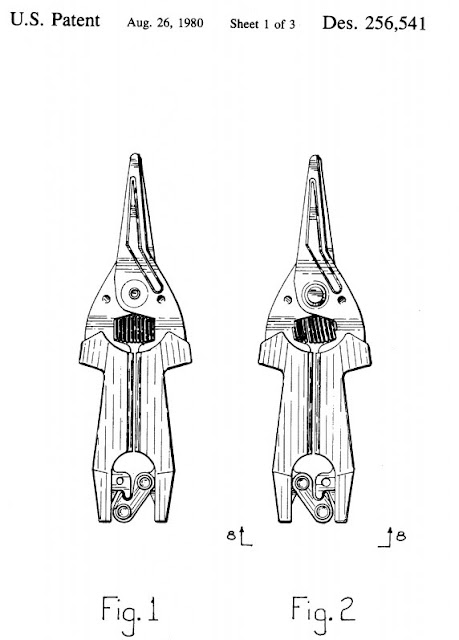 A plastic wall-mounted holder was a popular feature and proved easier to patent than scissors themselves.  Initially called Snips by Hough, the scissors were marketed as the Tullen Kitchen Cutter and seemed to be able to cut just about anything, even famously a penny!


Essentially, the tool was a cross between a pair of scissors and snips. They were effectively the best-cutting scissors in the world at that time. Transplanted American marketing guru Steve Bridges created versions for the kitchen, workshop and playroom. By the 1980s, more than 20 million had been sold.  This got the attention of the big players in the industry. Wilkinson Sword bought Tullen Industries in 1985, intending to fold it into its own Home and Garden Division. However, ownership of the Wilkinson Sword firm was being tossed around like a football at that time and the company's Home and Garden division ended up being sold to Fiskars of Finland in 1988.  It so happened that Tullen was in the process of installing robotic manufacturing that would be able to make 360 stainless steel scissors per hour.  For some reason, Fiskars perceived this as a threat to their own operations, so they packed up the entire New Zealand plant and moved it, holus-bolus, to the former Wilkinson Sword plant in Bridgend, Wales.  Production continued there for a while but, in a clear demonstration of the vagaries of the consumer marketplace, eventually ceased.  The "vintage" Tullen scissors are now highly sought after.

As for mine, they're in the kitchen drawer, awaiting an opportunity to take on that tough, clear plastic that manufacturers love to use as packaging (although I've read that can openers do a good job on this stuff as well).
Posted by The Duke at 9:35 AM

Got a pair from my mother-in-law estate, have used them to cut everything including sheet metal. Looking for a new pair, impossible to find any. This is ridiculous, the best tool ever made! Hope someone will put it back in production. Hey, Fiskar's, this is a lot better than your cissors! Wake up!

Hey thats my grandpa who made those!

Back in the late '70s I was working in motor racing in the UK. i was working for a Kiwi, involved making GRP (fiberglas) bodywork, he was one of the first to use carbon fibre/kevlar. he had expensive scissors, but they were nowhere as good as the red handled Tullen snips to cut the cloth sheets used in the layup of bodywork. I have been back living in Australia for many years, still have a few pairs in my tool box, use them regularly and as good as the 1st day.

I have a pair that I love but the spring has broken. Does anyone know how I can get a replacement spring?

I have a pair of one of the first Tullen orange handled scissors to arrive in South Africa ages ago when I was a kid. They used to be in my Mum's kitchen drawer and now grace my workshop. I fitted a cord to keep the handle ends together. Splendid for cutting anything and work as well as when brand new. Great Kiwi product and I am delighted that they are being produced again. They make splendid useful gifts. Well done Dave Salisbury.
Chris