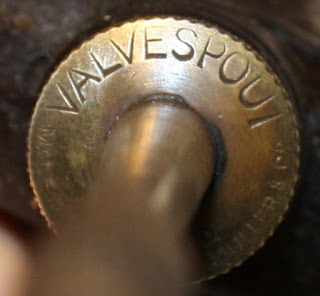 Below, my little Valvespout Oiler.  It used to be very handy when filled with threading fluid for tapping holes.  Sadly, the plastic bulb has become brittle with age and cracked, so it's been retired to ornament status in the shop.

My version was made in England by Muller & Co. 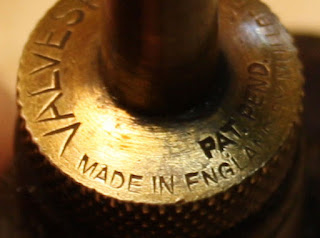 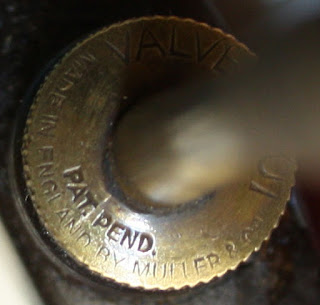 The spout has a nicely knurled end that, if turned clockwise, opens the spout, and closes it when turned in the opposite direction. Hence "Valvespout."

A British patent on the device was taken out in 1931. (My example is curious because the brass stem says "Pat. Pending" but the bulb is made of plastic.  I don't think this kind of plastic was around prior to 1931. Maybe they just never bothered to update the stamp.)  The patent was awarded to the Parker-Hale Company, the famous Birmingham arms manufacturer:


As such, the oiler was offered in various configurations.  It also appears to have been sold under license in the U.S. by the Continental Arms Corporation of NYC, a distributor of guns, gun supplies and even juke boxes! 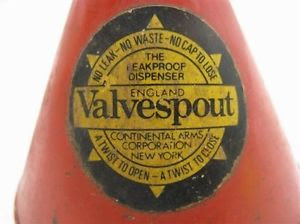 Continental Arms renewed the American "Valvespout" trademark in 1965, but let it expire in 2008.  I don't think that U.S. company is around anymore, at least not in its original form.

Across the pond, the Parker-Hale story didn't end well.  Founded in 1880 and once the largest producer of high-power sporting fire arms in the UK, the company had its ups and down through the last century.  It was perhaps most famous for "Parkerifling", a system by which old gun barrels could be renewed, or larger caliber ones could be sleeved down.  The company was facing some rocky financial times in the 1990's when the Dunblane school massacre occurred in Scotland in 1996. A teacher and 16 children were killed. The British government responded with new legislation severely curtailing gun purchases and ownership.  As the website above explained:


Events following the tragic Dunblane incident in 1996 are well documented, but public awareness to the consequences affecting people working in the gun trade was less forthcoming. The national ban on handguns brought further pressure on an already troubled industry and the closure of allied trades received little sympathy.


In the end, this drove Parker-Hale under. Parker-Hale was eventually sold to the Midlands engineering group, Modular Industries. In 1992 Modular sold the gun firm to Navy Arms of West Virginia which then sold it again to the Gibbs Rifle Co, also of West Virginia.  Both U.S. firms make historical replica firearms (as did Parker-Hale--see the 1973 ad above).  On the Gibbs website, they state, "The production facilities purchased from Parker-Hale were ideal for taking worn-out curio and relic firearms and upgrading them to Historical Remake™ arms."

The Birmingham firm's abandoned factory was visited by urban explorers, who documented its lamentable state in photographs. You can see these at 28 Days Later, specifically visits in June 2010, later 2010, and 2012.  For machine-tool lovers, it's heartbreaking to see this precision machinery left to the depredations of vandals and then to the ravages of the elements.  (It was eventually moved out and sold, mostly for scrap.  The company's historical documents were reportedly taken out into the yard and burned in a giant bonfire.) 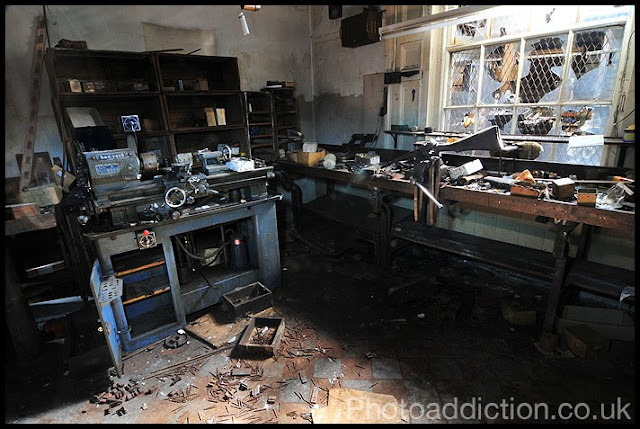 Anyway, it turns out that Valvespout oilers are still available from Production Equipment Limited in the U.K.  Maybe one of these days I'll treat myself to a new one.
Posted by The Duke at 8:28 AM

Recently found a few metal barrel ones depicted in the boys life ad. Found them at the local gun shop which has been arounD 65 years. Being a machinist and gun owner I hate excess oil so I grabbed the 3 he had sitting around. Got them all for 15$. I see ebay has used ones for around what I paid for all 3.

I have a Muller Valvespout oiler with the shorter neck along like the one you noted that is brittle, along with one of those metal oilers with the bent spout. They were given to me 20 years ago, part of a box of stuff that was in my crawlspace and recently resurrected. They are very cool and I plan to put them on display. I would pics of the 2, but can't find a spot to do so.

I love the old Valvespout oilers and and use them all the time when repairing sewing machines. There is a company making a bottle facsimile with a similar valve but way clunkier. I will be sad when mine wear out.