Above my Model 500 woodburning tool or "Wonder Pen" from this company. 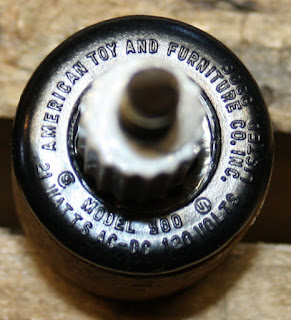 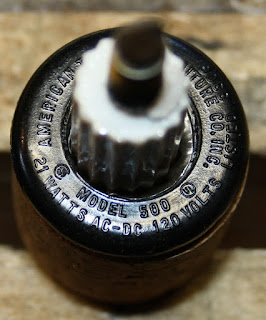 I don't know when they started making it, but the ad below celebrates its return to production at the end of World War II:

Ten years later it was still doing well, with accessories in a bigger kit:
The company also made tool kits for boys:

The company was co-founded by Meyer and Eleanor Rapaport.  On Meyer's death in 1959, his son Gerald gave up his career as a clinical psychologist to take over the reigns of the company. In addition to the products above, the American Toy & Furniture Company manufactured highly decorated children's furniture and games, which were sold through catalogues such as Sears, particular for the Christmas season.  Mr. Rapaport died in 1987, and the company filed for bankruptcy in December 1992.
Posted by The Duke at 7:46 AM

I am trying to get my 12 year old nephew interested in wood burning. I also have a simple model 500 woodburner from American Toy & Furniture. I received it for Christmas when I was 11 years old so Christmas 2018 will mean that it is 45 years old. I was thrilled to see this same model on your blog but sad to see that the company had to file bankruptcy instead of someone making the Rapaport legacy live on.

I just purchased my first one at a second hand store for $1.50 ... Hope it last the rest of my life

Of course it will!

Yea because it was made back when America made stuff that was made to last. Not like the crap made these days