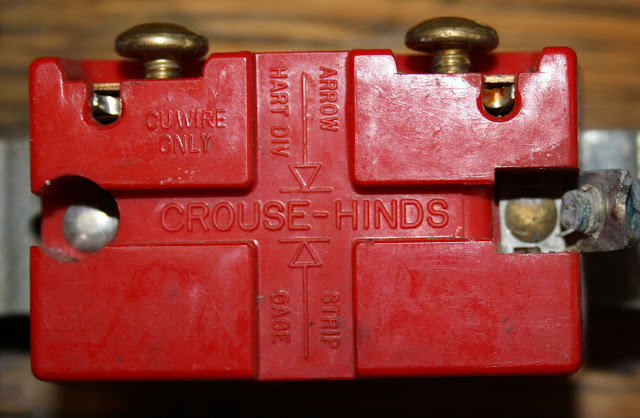 I did a previous post on a push-button switch from the  Arrow-Hart & Hegeman Company.  Here's one of their toggle switches.  The "Quiette" trademark was first used in 1953, and was renewed by Arrow-Hart Inc. in 1967.  It expired in 1992.

I've read that the old switches designed for DC systems needed very strong springs to prevent arcing, hence the "snap" when they were turned on or off.  As a result, the companies that made these products were at pains to make them more silent.

Crouse-Hinds also has an interesting history.  It was started in Syracuse, New York in 1897 by then 25-year-old Huntington Beard Crouse.  Backed by a large sum of money inherited from his uncle, Crouse teamed up with Jesse Lorenzo Hinds, 51, a factory superintendent (and former mechanic) of the Electric Engineering and Supply Company of Syracuse.  Their company went on to various achievements, including making the first traffic light in Syracuse, installed in 1924.  The company was acquired by Cooper Industries in 1981 and, somewhere in the murky world of corporate mergers,  Arrow-Hart became just one of its divisions.

The original Hart & Hegeman factory in Hartford, Connecticut fell to the wrecker's ball in 2002.  Read In Memoriam for a tribute to its place in that city's industrial heyday.  The author writes:

Still, the building should not pass into history without a proper memorial. It was once part of the city's thriving manufacturing district, a homely kin to the brick behemoths in the neighborhood that housed Pope Manufacturing Co. (bicycles and automobiles), Hartford Machine Screw Co., Weed Sewing Machine Co. and Pratt & Whitney Machine Tool, all in the manner of the more prominent blue-domed armory across town where Sam Colt set the standard for precision manufacturing.