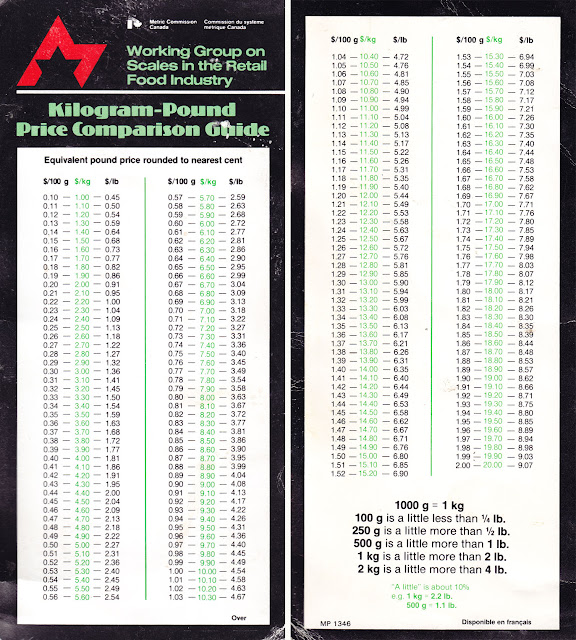 I found this pamphlet in the ditch alongside a nearby road recently, probably blown out of a dumpster from a house that's being renovated after the elderly owner passed away.

It brought back a lot of memories.  Pierre Trudeau's Liberal government brought the metric system into legal force in 1971, establishing the Metric Commission which published the pamphlet. When Canada went metric, it was expensive.  At the very least, all of the highway signs had to be removed and replaced.  It didn't stop there.  My late father worked for the old Ontario Hydro.  He told me that Hydro decided to go for metric A4 size paper sheets to replace the Imperial letter size.  That necessitated all new binders, which didn't fit the old bookshelves, so all new bookshelves had to be bought!  (They eventually went back to Imperial size paper, but think of the cost!) Country-wide, speedometers, gas pumps, grocery scales--all needed to be changed to metric.

One of the most evident anger-provoking changes was the metrification of weigh scales in grocery stores. Because consumers were confused about how much they were buying and how much it would cost, they were afraid of getting ripped off by grocers. Meanwhile, small grocers opposed the costs involved with switching over all their equipment, and thought it was a hassle to constantly try to explain conversions to customers.

Pamphlets, like the one above, didn't help, especially when they printed nonsensical things like the final text on the pamphlet above:

After President Reagan abolished the United States Metric Board in 1982, in 1984 the newly elected Progressive Conservative government in Canada abolished the Metric Commission, eventually shutting it down completely in 1988.  Now in Canada we're left with a mish-mash of the two systems.  As another CBC article said:

As the Calgary Sun wrote in March 2004, "Not only are we not metric, we're not imperial either. We're sort of both, depending on what you want to measure. And we're almost always confused." The Sun article summed up what's metric and what's imperial in 2004. Canadians measure outside temperature in Celsius, but many stick to Fahrenheit for body temperature (in terms of a fever, for instance). Canadian distances and speeds are metric, but a person's height and weight usually remain in imperial. For drinks, we talk about alcohol in pints and ounces, but use litres for milk or juice. And in recipes, the hodgepodge of both systems "can make a cook weep faster than diced onions [can]."

Up here, it's not unusual for gas prices to jump up 4 or 5 cents per litre.  With the old Imperial gallons, that would have translated to jumps of 18 to 22 cents per gallon.  My friends in the US, with their smaller gallon, tell me they never see jumps anywhere near that.  So, I think the metric system has been the perfect tool for the big gas companies to ream Canadian drivers much more effectively.

So, I think metrification is just another sad legacy of Pierre Trudeau (who also set the country on its way to its present huge national debt.)