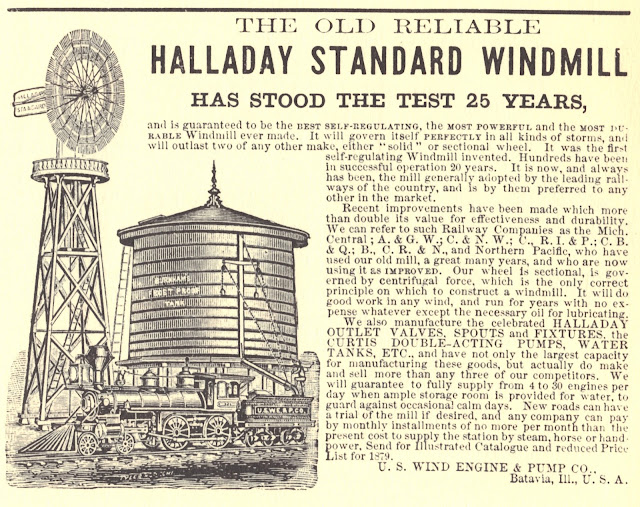 This type of windmill was invented in Connecticut in 1854 by a young mechanic named Daniel Halladay. Its wheel, made from wooden “sails,” was transported in sections and assembled on location.
The windmill would automatically turn its face into the wind by wind pressure on the vertical tail behind it. Also a weighted mechanism came into play that turned the wheel partially out of the wind to slow it down if the wind got too strong.
The U.S. Wind Engine and Pump Co. was formed in 1857 to sell these devices and built their factory at the industrial town of Batavia, Illinois in 1863. By the 1880s it was considered to be the largest manufacturer of windmills and pumps in the world, every railway and farmer needing water pumped out of the ground.


The design of windmills has changed, the multi-blade fan type has been replaced by the large two and three blade devices we see in wind generation.  The fan type windmills were designed for low start-up wind speeds and slow-speed operation, the electrical generator’s two or three thin blades are designed to run at higher rpm.