Zen and the Art of Motorcycle Maintenance

I just learned today that Robert Pirsig died yesterday, age 88.  For those of us who came of age in the 1970's, his was one of those seminal books you had to have read or, like many, tried to read or simply just said that you'd read. In 1978 I took a copy with me on my Norton sojourn to California, and lost and replaced it three times on the trip.  I ended up seeing myself as something of a minor Johnny Appleseed for his book, spreading it around as I moved along. Years later I bought his second book, Lila, but I have to say I've never been able to get through it. Still, it occupies the space on my library shelf beside two copies of Zen and the Art.

After I returned home from my California road trip, the last copy of Zen I bought had an afterword from Pirsig about his son Chris's murder in 1979.  This was the boy who had ridden with him on the motorcycle trip that formed the basis for the book.  He died two weeks shy of his 23rd birthday.  Very sad.

Anyway, as something of a tribute, I offer my two favourite send-up cartoons: 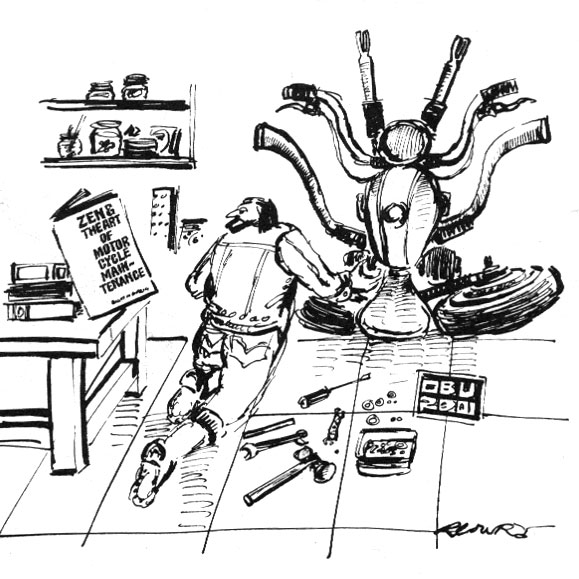 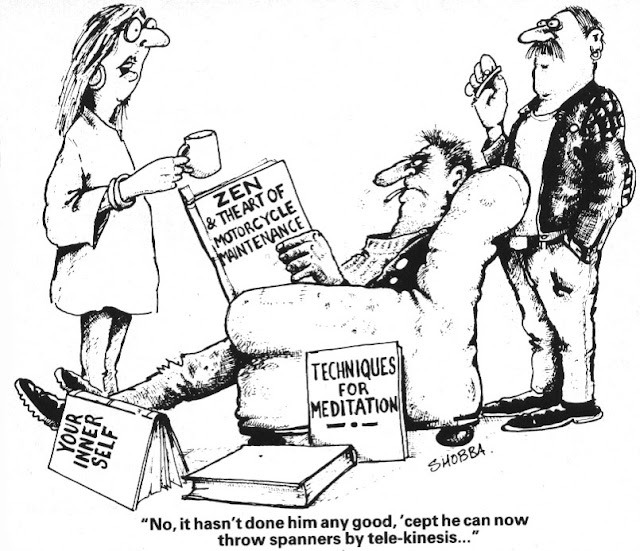 I couldn't get through "Lila" either.

For whatever it's worth, here's one of my favourite bits from
"Zen and the Art of Motorcycle Maintenance":

"His handlebars had started slipping. Not badly, he said, just a little when you shoved hard on them. I warned him not to use his adjustable wrench on the tightening nuts. It was likely to damage the chrome and start small rust spots. He agreed to use my metric sockets and box-ends.

When he brought his motorcycle over I got my wrenches out but then noticed that no amount of tightening would stop the slippage, because the ends of the collars were pinched shut.

"You’re going to have to shim those out," I said.

"It’s a thin, flat strip of metal. You just slip it around the handlebar under the collar there and it will open up the collar to where you can tighten it again. You use shims like that to make adjustments in all kinds of machines."

"Oh," he said. He was getting interested. "Good. Where do you buy them?"

"I’ve got some right here," I said gleefully, holding up a can of beer in my hand.

He didn’t understand for a moment. Then he said, "What, the can?"

I thought this was pretty clever myself. Save him a trip to God knows where to get shim stock. Save him time. Save him money.

But to my surprise he didn’t see the cleverness of this at all. In fact he got noticeably haughty about the whole thing. Pretty soon he was dodging and filling with all kinds of excuses and, before I realized what his real attitude was, we had decided not to fix the handlebars after all.

As far as I know those handlebars are still loose. And I believe now that he was actually offended at the time. I had had the nerve to propose repair of his new eighteen-hundred dollar BMW, the pride of a half-century of German mechanical finesse, with a piece of old beer can!

Since then we have had very few conversations about motorcycle maintenance. None, now that I think of it.

You push it any further and suddenly you are angry, without knowing why.

I should say, to explain this, that beer-can aluminum is soft and sticky, as metals go. Perfect for the application. Aluminum doesn’t oxidize in wet weather...or, more precisely, it always has a thin layer of oxide that prevents any further oxidation. Also perfect.

In other words, any true German mechanic, with a half-century of mechanical finesse behind him, would have concluded that this particular solution to this particular technical problem was perfect.

For a while I thought what I should have done was sneak over to the workbench, cut a shim from the beer can, remove the printing and then come back and tell him we were in luck, it was the last one I had, specially imported from Germany. That would have done it. A special shim from the private stock of Baron Alfred Krupp, who had to sell it at a great sacrifice. Then he would have gone gaga over it."

The book was a factor in my life too. It wasn't about motorcycle repair. but that's what got my attention. It took me several attempts to get through it, more times to understand what it was he had tosay. But the first time I read it, this passage caught my eye, me, having barely passed high school, and now employed and bored as a Sears repairman. It was probably a big impetus to get me back to school and into product design.

"The Church attitude is that civilization, or 'the system' or 'society' or whatever you want to call it, is best served not by mules but by free men. The purpose of abolishing grades and degrees is not to punish mules or to get rid of them but to provide an environment in which that mule can rum into a free man.
The hypothetical student, still a mule, would drift around for a while. He would get another kind of education quite as valuable as the one he abandoned, in what used to be called the 'school of hard knocks.' Instead of wasting money and time as a high-status mule, he would now have to get a job as a low-status mule, maybe as a mechanic. Actually his real status would go up. He would be making a contribution for a change. Maybe that's what he would do for the rest of his life. Maybe he'd found his level. But don't count on it. In time - six months; five years, perhaps - a change could easily begin to take place. He would become less and less satisfied with a kind of dumb, day-to-day shopwork. His creative intelligence, stifled by too much theory and too many grades in college, would now become reawakened by the boredom of the shop. Thousands of hours of frustrating mechanical problems would have made him more interested in machine design. He would like to design machinery himself. He'd think he could do a better job. He would try modifying a few engines, meet with success, look for more success, but feel blocked because he didn't have the theoretical information. He would discover that when before he felt stupid because of his lack of interest in theoretical information, now find a brand of theoretical information which he would have a lot of respect for, namely, mechanical engineering.
So he would come back to our degreeless and gradeless school, hut with a difference. He'd no longer be a grade-motivated person. He'd be a knowledge-motivated person. He would need no external pushing to learn. His push would come from inside. He'd be a free man. He wouldn't need a lot of discipline to shape him up. In fact, if the instructors assigned him were slacking on the job he would be likely to shape them up by asking rude questions. He'd be there to learn something, would be paying to learn something and they'd better come up with it.
Motivation of this sort, once it catches hold, is a ferocious force, and in the gradeless, degreeless institution where our student would rind himself, he wouldn't stop with rote engineering information. Physics and mathematics were going to come within his sphere of interest because he'd see he needed them. Metallurgy and electrical engineering would come up for attention. And, in the process of intellectual maturing that these abstract studies gave him, he would be likely to branch out into other theoretical areas that weren't directly related to machines but had become a part of a newer larger goal. This larger goal wouldn't be the imitation of education in Universities today, glossed over and concealed by grades and degrees that give the appearance of something happening when, in fact, almost nothing is going on. It would be the real thing."

Hi,
Yep, I read Zen... like everyone else at the time. Some of it went in, some I have reservations about.
However, I was taken with the Shobba cartoon, I haven't seen that one before. If you were part of the British motorcycle world in the 70s/80s his drawings hit the spot, every time. Try googling his images on the net. I wonder where he is now?
Regards,
Tony


Thanks for this! I followed your advice to search online and found someone had posted a series of motorcycle cartoons by Shobba originally published in Bike magazine:
https://www.dropbox.com/sc/9az9teopqk0jac5/k8oj9fLS1k
They're great!

thanks am looking to read zem Maintenance