Mister G did a previous post on these wrenches.


Wrenches with this distinctive T over W trademark turn up pretty regularly where I live. The earliest ones I've found are wartime wrenches, with the British Broad Arrow mark and a simplified logo: 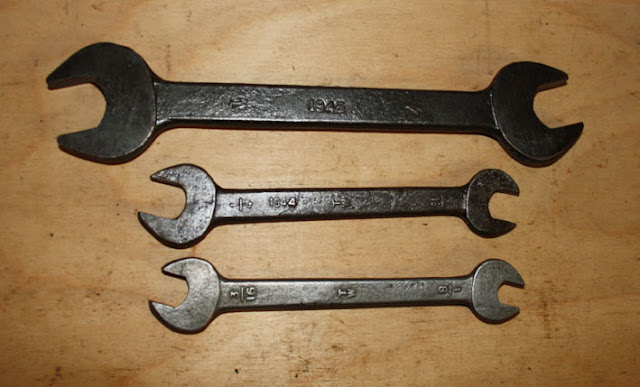 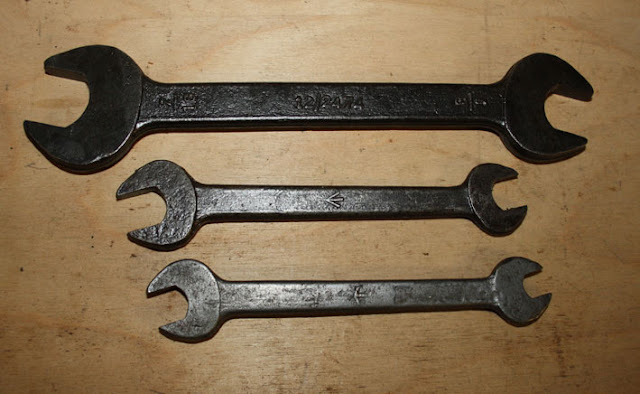 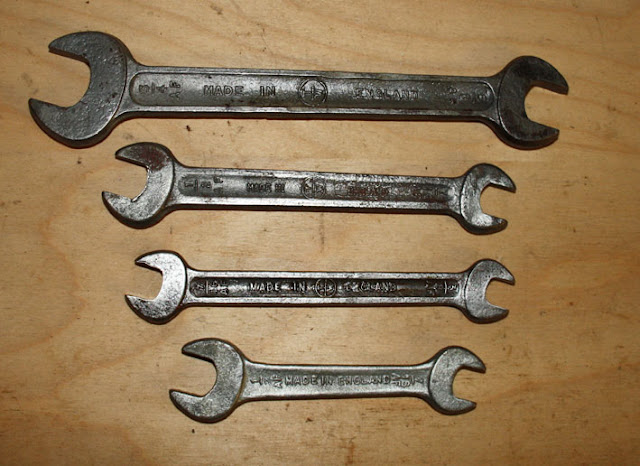 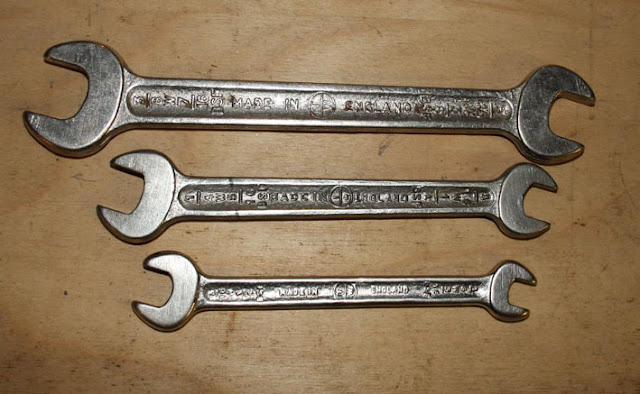 And unplated Whitworth ones: 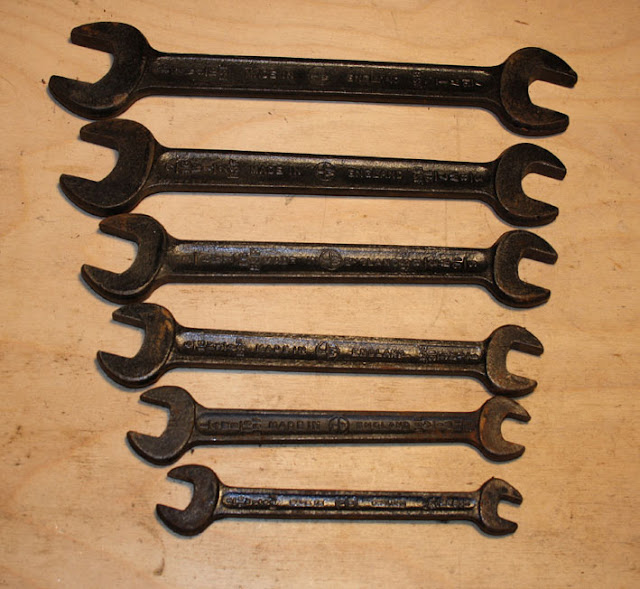 I was recently thrilled to discover a pair of the company's pliers in a local thrift shop!  They'll make a nice addition to the Norton's toolroll: 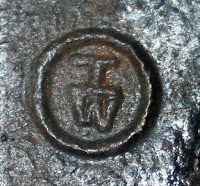 T. Williams (Drop Forgings and Tools) Ltd was incorporated on the 29th of March, 1906.  Their primary products were wrenches and pliers, particularly for the motorcar market.

The factory was located on Tilton Road in Birmingham, just a few miles from the massive BSA factory complex in Small Heath.  In the 1990's, the city demolished the Tilton Road terraces and expanded the St. Andrew's Stadium in the area.

According to Grace's Guide, the company was acquired in 1958 by the Eva Brothers, a large drop-forging company that, among other things, made the connecting rods for the engines in the Titanic and her sister ships. (By 1953, Eva had become the largest manufacturer of edge tools in the world.  This company became Eva Industries in 1960 which partnered with Spear and Jackson to form Spearwell Tools in 1967 to produce and market gardening tools.  In 1970, Spear & Jackson bought out Eva's interest in the joint venture.  To see an interesting Spear & Jackson family tree, go to Timeless Tools.)  In any event, T. Williams seems to have continued under its own name under Eva's corporate ownership.

According to a September 1969 article in Commercial Motor, the company introduced a line of "short bi-hexagon ringspanners in fully polished chromium plate."  Patents for a torque wrench, invented by  someone with the quintessentially British name of Basil Joseph Birmingham Hastings, were issued to the firm in 1975 and 1982. In 1982, Grace's Guide records that Eva Industries was acquired by the Anglo-Indonesian Corporation plc.  (The Eva Brothers factory is now yet another abandoned industrial ruin:  Derelict Places.)

On the Companies House website, however, it records how T. Williams (Drop Forgings and Tools) Ltd became T. Williams Ltd. in 1980, and then Williams Superslim Ltd. in 1992.  In 1992, it (along with Eva Industries) were 100 percent owned subsidiaries of the Chillington Corporation PLC:

As can be seen from the above, subsidiary companies included the Chillington Tool Company, an old manufacturer dating back to 1822 that started off making its name with horseshoes before eventually turning to edge tools. It's still around:  Chillington Tools. Subsidiaries also included Thomas Smith & Sons of Saltley Ltd., famous for Snail Brand tools.

In 1996, in a remarkable alteration of direction, the company changed its name again to the Overseas Farmers Group Ltd., a company "involved in the sale of agricultural raw materials, live animals, textile raw materials and semi-finished goods." From the little information I can find, it doesn't seem active anymore. 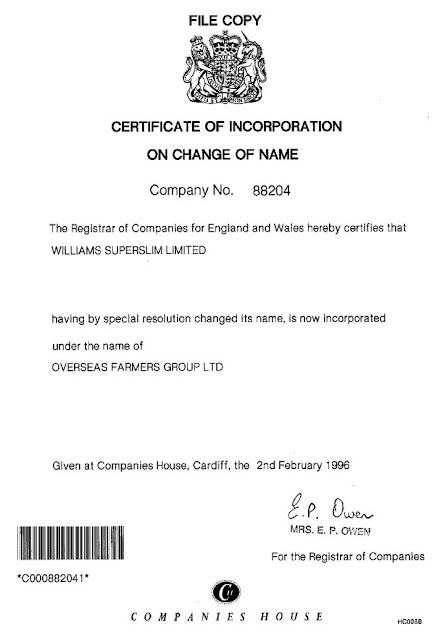 So, after almost a century, T. Williams vanished, just like that. Actually, the writing was already on the wall. In Doing Business with the United Kingdom. Report of the U.S. Department of Commerce Machinery and Equipment Mission To the United Kingdom May 12 to June 17, 1962, T. Williams was listed as one of the active tool-making companies in the U.K.  The report began:


In general, business men in the United Kingdom are convinced that their industries must promptly diversify their products, and bring about a marked increase in productivity per man-hour and per machine-hour. There is a less general, but still widely-held belief that the demand of the British consumer will necessitate the British economy to increase its products for home consumption, while at the same time selling enough overseas to pay for increased raw material requirements.

In the following five areas of British industry, the Mission made extensive examination of problems and programs. In all the areas, it was apparent that the business men were not yet close enough to solutions of their problems to know what positive action they are going to take. In our opinion, this situation constitutes an opportunity for American machinery, equipment and technology.

METAL WORKING
One and one- quarter million machine tools are in use in British industry. A little over 59% of them are now more than 10 years old. Compared to the U.S.A., Britain has about the same pro- portion of newer machines, under ten years old, but a much higher proportion of very old machines of prewar design.

Somewhere along the line, the Williams Superslim brand was bought by an old rival, Smith Francis Tools.
Posted by The Duke at 8:50 AM

I worked for T.Williams and then Thomas Smiths from 1975 until it closed in 1992. They sold the order books to Forgemasters (I think it was called) in Blackheath Birmingham, but I didn't enjoy working there and left after a month or so. I believe they closed down in about 1996.

Hi Lance
Its Simon. I thought you might remember that joke.

I too worked for T williams and Thomas Smith till i volunteered redundancy and an aware it closed not long after. I must have worked with some of you guy's One person springs to mind was a guy called Lance who's wedding i went to

Hi Keith, great to hear from you mate. My email is poolfarm2@aol.com

Just discoverd a pair of pliers with "T. Williams (TRW) Ltd British .w. Made" Great set of pliers, and I assume the (TRW) refers to Tilton Road Works, but curious as to the .w. in between the British and Made stamp.

I also worked for T. Williams, in the wages office. They started out as Chain Makers in Warrington. Moved to Birmingham - Anderton Road, then Tilton Road, Tommy Williams had his 4 sons work for him and his daughter done the book work. 1 worked there till 1985

Interesting, I always thought T.Williams started at Tilton road, what year were they sited at Anderton road?
All the years I worked at TW's, Betty ran the wages department.

I also worked with Betty in the wages office. Was there till 1985 loved this job