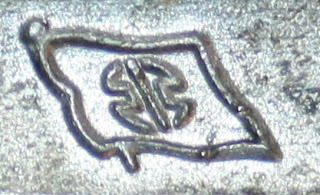 In my initial post, I had no idea what this flag symbol represented. Fortunately, several visitors left comments that clarified it for me.

The Meguro Manufacturing Company motorcycle works was founded in 1937.  It was one of the first Japaneses motorcycle companies, becoming a partner of Kawasaki Aircraft Company in 1960.  In 1962, the firm became Kawaski-Meguro before being completely absorbed by Kawaski in 1964.
Posted by The Duke at 8:03 AM

Many thanks for this!