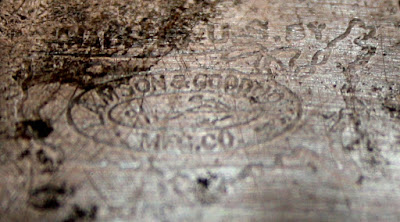 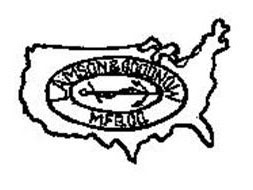 Above, my Lamson & Goodnow knife.  I principally use it for cutting the tape on cardboard boxes before recycling them.  Their trademark was first registered in 1918.

In 1834, the use of a scythe was a regular part of rural life.  Farmers found that if they could find a bent piece of wood to use as a snath, it was easier on the back. Silas Lamson devised a method for steaming and bending wood to make curved snaths on a production line basis.  He came to Shelburne Falls in around 1835 with his two sons, Nathan and Ebenezer, to manufacture these items, eventually producing as many as 20,000 snaths. In anybody's book, that's a lot of snaths!  In 1837 (or 1844, according to other sources), Lamson, his two sons, and his partner Abel Goodnow founded Lamson & Goodnow.  The business of scythe making involved familiarity with iron- and brass-working machinery.  At that time, most knives were imported from Europe, and the accepted belief of the day decreed that domestically-made items could not possibly equal their quality. Lamson took on the challenge and recruited skilled cutlery workers from Sheffield, England and Solingen, Germany, the two foremost centers of cutlery production at the time.  Demand was low to begin with, and only about 40 people were employed.   Knife production continued at the original snath shops, but growing demand forced a move in 1851 to larger premises, powered by a dam across the Deerfield River at the Falls. (The original factory later burned down in 1864.) The company focused on developing machinery to speed up production.

One very important innovation was an invention by J.W. Gardner of a machine to forge the bolster of knives and forks, which permitted the handles to be very securely fastened. The emphasis on such quality led to rapid expansion and by 1860 the company had become the largest cutlery producer in the U.S.  By the end of the U.S. Civil War, the company was employing 400 workers and annually consuming 200 tons of steel, 1800 pounds of ivory, 150 tons of ebony, 300 tons of rosewood, 300 tons of coconut, 400 tons of coal, 100 tons of grindstones, 10 tons of emery, 5 tons of sheet brass and brass wire, and about 300,000 pieces of shin-bones! The firm was a major contributor to the region’s transformation from a primarily agricultural to an industrial economy, and by the time of the Civil War, it helped establish the Connecticut River Valley as the center of American cutlery production.

According to Steven Dick, writing in 2015 for Real World Survivor:


When the steam ship Bertrand sank in the Missouri river on its way to the Montana buffalo herds in 1865, a significant part of its cargo was L&G knives. A lot of those skinning knives would have been needed out on the buffalo range. The U.S. Bureau of Indian Affairs also bought thousands and thousands of blades off the company for treaty reparations to western tribes. One single government order during the 1870s was for 18,852 knives! If someone were to ask what the most common knife found on the belt of a Plains Indian warrior would have been, I would have to say the odds were very high that it was one of Lamson & Goodnow’s.

Obviously, these knives weren’t just used by the Plains Indians. I know of one L&G hunting knife on display in Deadwood, South Dakota, that is stated to have belonged to Wild Bill Hickok. There is also a photo taken when Hickok was working in a wild west show with what, to my eye, appears to be a large Lamson & Goodnow hunter thrust under his belt. L&G blades may have been plain, but they were hard-working tools fully up to handling frontier life.

(The story of the steamboat Bertrand is an interesting one in its own right.)

In 1869, the workmen of Lamson & Goodnow produced a dinner set of 62 pieces for President Ulysses S. Grant. Half of the pieces were set in mother-of-pearl handles and half in ivory, with American maple leaves engraved on the handles. The workers stated that they felt a "national pride in presenting [the set] to one who will appreciate the perseverance that aims at nothing short of perfection."  Some pieces of this extraordinary gift set can be seen today at the Smithsonian Institution in Washington, D.C.

By the 1880s, L&G was offering a complete line of cutlery that included tableware, carving sets, butcher and skinning knives, hunters, leather working tools, sailor deck knives and machetes.  At various points during their history, Lamson and Goodnow have been involved in the manufacture of arms (e.g. the Springfield Rifle), sewing machines, agricultural implements, and other tools. They remain active in the production of cutlery, trade tools, and kitchenware.  The company has also produced a number of cutlery lines under private labels for a wide variety of customers.

In the new millenium, the business faced steep challenges.  The number of companies making cutlery and hand tools in the U.S. dropped 29 percent from 1998 to 2012, to just 1,200.  When the U.S. census finally put cutlers and hand tool makers into separate categories, there were just 188 cutlery makers left in 2012.  Lamson & Goodnow wasn't exempt from these pressures, and the company filed for bankruptcy protection in 2014.  Their 18-acre factory complex on the Deerfield River was put on the block for $2.1 million.  In December 2015, the firm was bought by Longmeadow Capital, which renamed it LongCap Lamson Products LLC.  That same year, the factory was relocated to Westfield, 50 miles to the south, and the company claims that manufacturing has remained in western Massachusetts.


As for the original mill in Shelburne Falls, a plan has been put forward for its adaptive reuse by JSR & Associates.

For readers interested in a broader perspective on the history of cutlery making, J. Wiss & Sons have posted an interesting 1950 publication by Lewis D. Bement (Associated Cutlery Industries of America)  in pdf:  The Cutlery Story.

I like to read your blog, which contains a lot of historical information, wonderful stories.