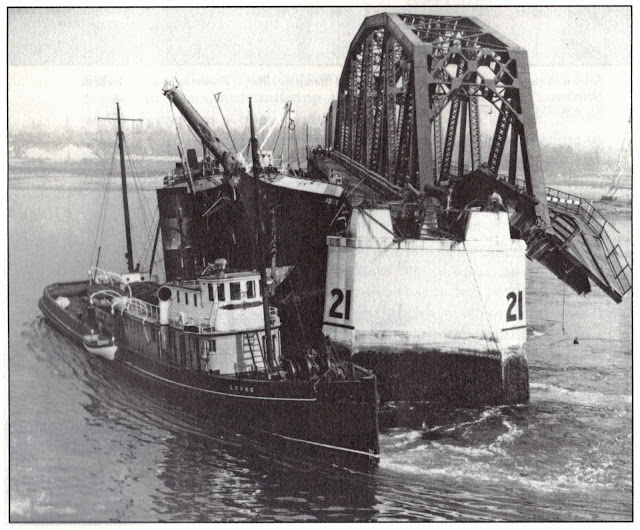 The Second Narrows Bridge in Vancouver connected the city with the north shore and was constructed in 1925. The bridge spanned the Burrard inlet and in the next few years was hit and damaged by several ships. In 1930 the barge Pacific Gatherer became wedged under the bridge and the rising tide caused the span to become dislodged and later to fall into the water. This caused the bridge to be closed for 4 years till the provincial government purchased it and rebuilt it with a lift section. The tug boat Lorne is in the foreground, in the picture-center below. The Pacific Gatherer had been built as the 4 mast steel hull barque Alsterberg in 1902. By 1922 it had been demasted and reduced to a barge, being used along the west coast. In 1936 it sank while being towed.

After this bridge was rebuilt in the mid '30s, it served both railway and automobile traffic. The 6 lane highway bridge that we have today, was built in 1960 right next to the original bridge. This new highway bridge was named the Second Narrows bridge until 1994 when the name was changed to the Ironworkers Memorial Bridge, to honour the 18 workers killed in 1958 collapse of the bridge while it was under construction. My family lived less than a mile away from that bridge and my mother recalls hearing the crash and seeing the debris of the wreckage. I was only 3 years old, so I don't remember it myself.
About the time the new bridge opened, the old original bridge was converted to rail traffic only, and in 1969, CN rail replaced it with a larger span that included a much higher lift section. This rail bridge is still in use today.
The concern about these (and the Lions Gate) bridges being struck by ship traffic is again a hot news topic. A huge increase in tanker traffic under these bridges is anticipated if a planned larger pipeline and expanded marine loading terminal gets built in nearby Burnaby.