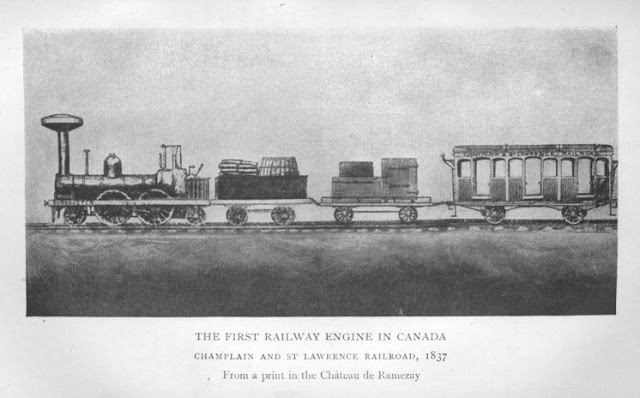 Conflicting pictures of Canada's first locomotive. The first shows a 2-4-2 wheel arrangement, the second an 0-4-0. Turns out the second is correct, and I can't find an explanation for the incorrect painting. There was a second locomotive acquired soon after, but it was different again, with a 4-2-0 wheel arrangement. We'll put it down to artistic license. Clues to the puzzle found on the railway bonds where the locomotive appears to be an 0-4-0. 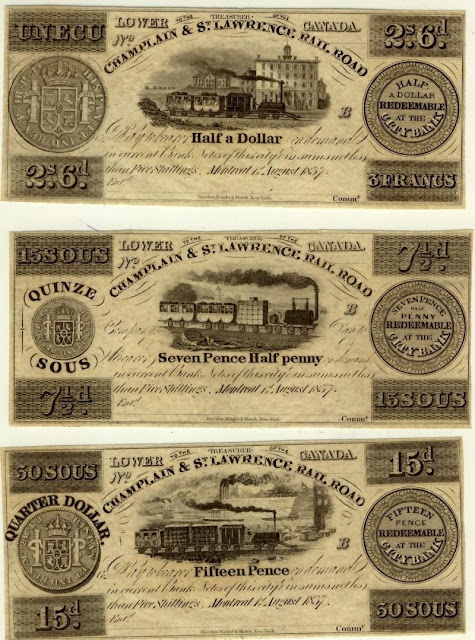 And on a recent commemorative stamp from Canada Post... 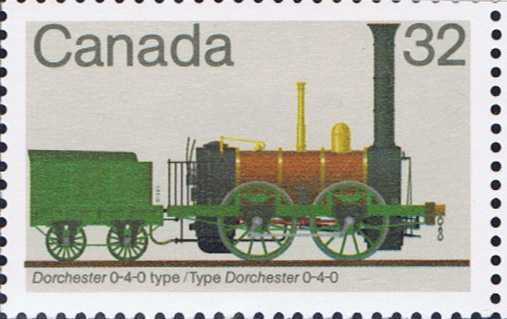 And finally a photo of the Dorchester replica at the Delson Railway Museum. 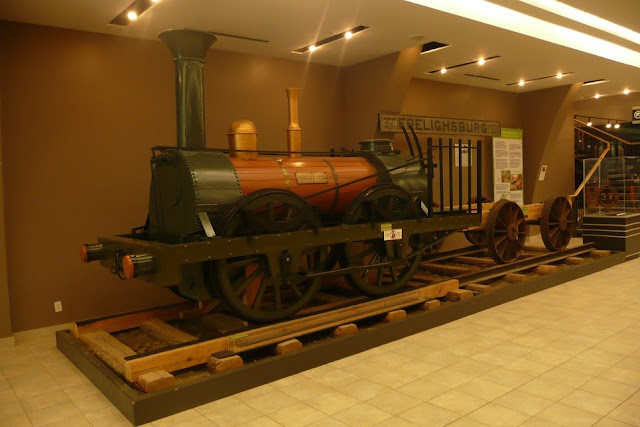 From 1837-1847 the Champlain and St. Lawrence was the sole steam railway in British North America. Running 16 miles from La Prairie on the St. Lawrence to St Johns on the Richelieu river, it provided a route from Montreal to Lake Champlain on the way to New York. Construction was begun in 1835, and the road opened for traffic in July 1836. At first horses were used for power, but the proprietors (including John Molson again) purchased an engine from Robert Stephenson in England for £1,500 and the Dorchester arrived at Molson’s Wharf in Montreal in June 1836. This was Stephenson`s 127th locomotive, it was 13 ft 6" in length, had four driving wheels 48" in diameter and weighed 12,544 pounds, .
The locomotive had a high centre of gravity and the short wheel base earned it the nickname Kitten for its skittish behavior. It arrived with its own engineer, who apparently immediately bolted, leaving the new owners to figure out this new fangled concept of steam. During the initial attempts at operation it is said that due to inexperience and small water capacity the boiler was run short of water, causing the flue tubes to rupture.
When the locomotive was repaired and the train was finally slated for its first run, the management decided to make the trial run by moonlight. Even then, in spite of all the efforts of engineer and officials, the locomotive would not budge an inch. Finally an engineer, borrowed from the Baltimore and Ohio Railroad, reported that all that was needed was "more wood and water." and given these the Kitten gambolled along at twenty miles an hour.
Another article mentioned that during operations in the next year or two it was found that the leading truck of the second locomotive (named the Jason C. Pierce) gave superior tracking compared to the 0-4-0 arrangement so the Dorchester was converted to the same wheel arrangement in 1839, by substituting a leading truck for its forward pair of drivers. That still doesn't match the first painting. Or this photograph.


More info at The Railway Builders