We used to make things in this country. #19: Butterfield & Company, Rock Island, Quebec 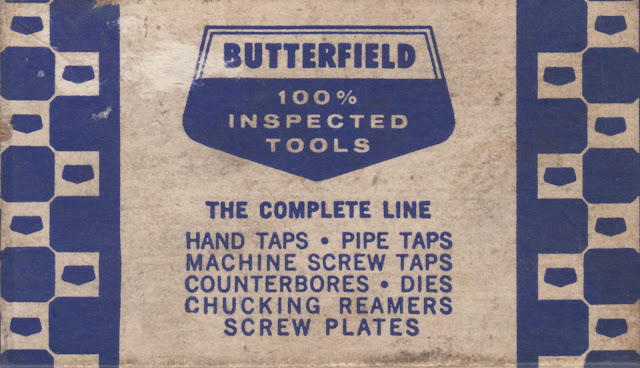 Axles on horse-drawn conveyances took a beating on the rough American roads in the late 1800's.  A young man named Lewis Young took note of this and in the late 1870's invented a special axle cutter for repairing and tightening worn out wagon wheel axles.  He marketed his invention by taking around to blacksmith shops in both Quebec and New England, where it sold well.  In 1880, he approached Colonel Frederick D. Butterfield for financing to expand his business.

Butterfield had left the army and moved to Derby Line, Vermont to manufacture the Reece sewing machine.  (Coincidentally, John Reece who developed the first automatic eyelet buttonhole machine in 1874, had been born in the township of Stanstead, Quebec, which included the town of Rock Island.  His first production sewing machine was offered for lease in 1883, and it wasn't until the 1970's that the Reece Company began selling their machines, abandoning their practice of leasing their machines and collecting weekly rentals plus payments for the number of buttonholes sewn by each machine.)

The sewing machine business was experiencing a downturn, so Butterfield willingly went into partnership with Young, establishing one factory in Derby Line and also purchasing a wooden buildling on Foundry Hill in Rock Island, Quebec just across the border. 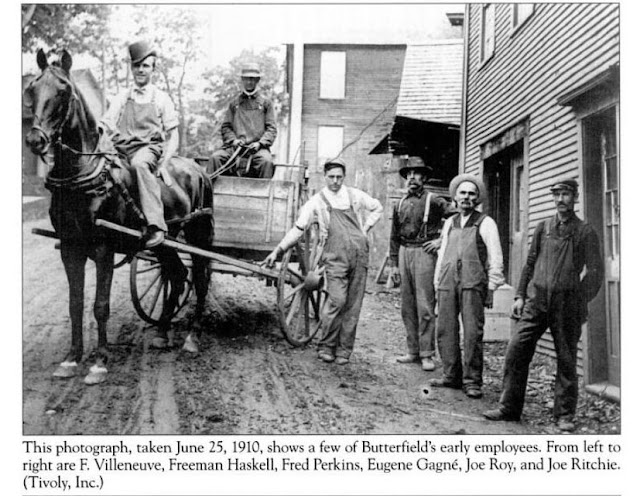 Other partners in Butterfield & Co. included John Hay, and George L. Reece.  Reece came up with his patented screw plate, which provided the company with one of its major products to meet the needs of steam-fitters and engineers (although this product or a similar one was also marketed by the E.F. Reece Company of Greenfield, Mass.  Both Edward F. Reece and his brother,Virginius Reece, had patented been awarded patents for dies, and were partners in the business after leaving Wiley & Russell.  For more on the complicated history of tap and die making in Greenfield, visit American Centuries.) 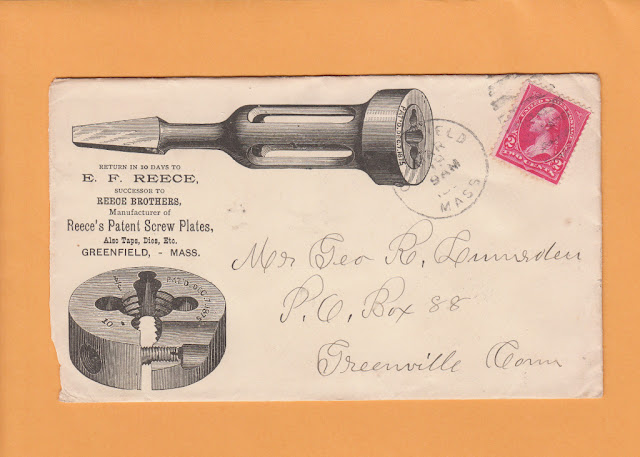 Over the following years they had to tackle how to make cut-thread carbon taps to an accuracy of 2 to 5 thousandths of an inch, and then progressing to ground-thread high speed steel taps requiring an accuracy of half a thou.  Over time, the company improved on its methods of hardening and tempering its products, beginning with heating them in sand and tempering by color, followed by heating carbon steel taps in hot lead and drawing them in oil, and finally hardening them in electric furnaces using gas curtains to exclude all but the necessary elements.  Eventually, the company was offering an extensive line of cutting tools, including taps, dies, drills, screw plates and reamers. 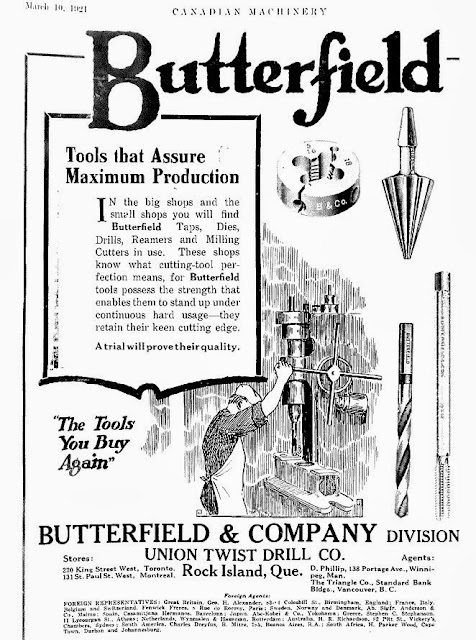 With prosperity, the company moved to a new location on the Tomifobia River directly on the border between Quebec and Vermont.  At its peak, Butterfield employed around 800 people in a factory that spanned over 200,000 feet on both sides of the border.

The firm had a huge economic impact on the area, and managed to maintain most of its workforce even during the dark days of the Great Depression.  In the late 1960's, Litton Industries bought Butterfield and made it a division of the Union Twist Drill Company of Athol, Massachusetts to form Union-Butterfield.  From my own collection, it seems that drill bits and taps made in Rock Island were sometimes stamped "Butterfield" and sometimes "Union." 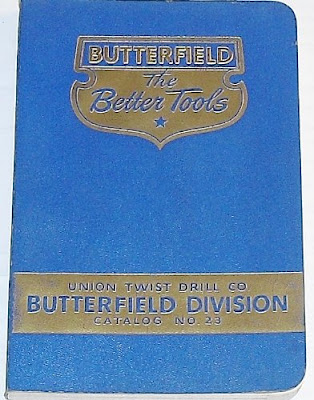 However, all good things come to an end and in 1982, following a lengthy strike by Canadian workers, Litton Industries decided to close down the Canadian side of the operation.    Ultimately, production was also moved from Derby Line to a new facility in North Carolina.  In 1990, the two large  toolmakers SKF of Sweden and Gunther of Germany merged, forming CTT.  As SKF had previously acquired Dormer, this was also part of the mix.  The newly formed CTT acquired Union-Butterfield the same year.  In 1992, CTT itself was acquired by Sandvik.  The Dormer brand survived; Union-Butterfield did not.  It didn't help that, in 1995, a disgruntled former Union-Butterfield employee entered the North Carolina facility with guns and opened fire, killing 3 men and wounding 2 others. At the time, it was western North Carolina's worst case of workplace violence.  In a subsequent jury trial, widows of two of the murdered men were awarded nearly $8 million from Dormer Tools and Union Butterfield.  (Dormer appealed and later settled out of court.)  Shortly thereafter, Sandvik closed down the North Carolina facility and moved operations elsewhere.  As one person commented on a tool enthusiasts' forum:

"I always thought it was a sorta gross over reaction to kill off the U-B name. The whole thing would've faded from the minds of those who knew about it with time, and if you went a hundred miles away from here there probably wasn't one person in a thousand who'd have remembered it a month after it happened. OTOH, the U-B name had a reputation for good cutting tools that had been built up over 40 or more years. Not minimizing the seriousness of the tragedy by any means, but it just seemed like a real dumb move on Sandvik's part." 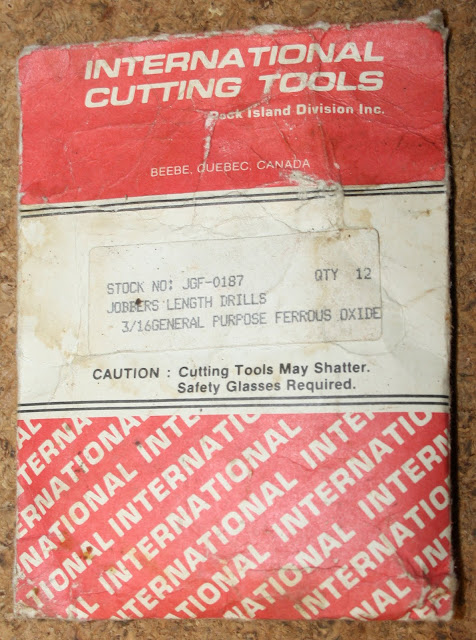 On the Canadian side, Rock Island was incorporated into the larger town of Stanstead, Quebec in 1995. In this town, the Quebec-Vermont border passes back and forth between streets, actually dividing some individual houses in half so that the residents prepare dinner in the United States and eat it in Canada.  The Canadian side of the old Butterfield factory is now the home of several small industries, such as the Sealander Waterworks which is a demonstration site for renewable energy.  For more on the history of the town, visit the Rock Island Project.

Butterfield's went on strike after the unionized workers discovered that they were being paid much less than their american counterparts. When they wanted parity, they were shut out by management and the owners who wanted much cheaper but completely well-trained workers, it got ugly. Entire families moved to Smith's Falls, Ontario to work in their other factory. The Three villages or Stanstead now, is a small declining ghost-town.

Are the tools worth anything

Unfortunately not anything near what we hope.

I went to work for Union-Butterfield in 1984 which was owned by Litton at that time. The plant called "Strait line" was located in Gaffney South Carolina. Its headquarters was in Asheville,NC where the shooting happened. I work there untill 1999, the plant closed in 2000. Tivoly bought Union Butterfield then sold it a couple years later to Sandvick.

I worked at Butterfield as a custom tool designer from 1977-1980 in Derby Line. Happy to reminisce with these old photos and history of the place. 40 years later, I have the opportunity to need a custom tool made and I found out that at least 2 of the people I worked with are STILL there (Tivoly now)! Hope someone sees this post, it is 7 years since this article was put on here.

Thanks for your comment! If you have pictures or stories I'd love to add them to the post!

My Great-Grandfather worked at Butterfield for many many years. I am just looking into my family and discovering many interesting things. His name was Elijah Lowell and worked for Butterfield until he passed away! These are great photos to see where he worked!

My father worked at Butterfield for 44 years. During his time there, in the fifties and sixties and probably for longer than that, the Holland family owned the business.

We are dusting off our Butterfield Die set to make some nipples today.

I WORKED IN THE MONTREAL OUTLET THAT WAS WAS ON WAVERLY STREET AND THEN MOVED TO VAN DEN ABELLE STREET IN ST LAURENT, WAS WORKING WITH MR KEELER AND I REMEMBER TWO SALESMEN FROM THAT ERA MR COUILLARD AND MR BLANCHETTE, THERE WAS ALSO A MRS KHIRA. HAD A GREAT TIME THERE WHEN WE VISITED THE PLANT IN DERBY LINE,ONE OF OUR CUSTOMER WAS INDUSTRIAL STEEL ON MEILLEUR STREET.THIS WAS IN 1980-81

Thanks for the note!