Below, an old pulley block I have hanging in my barn.  It's made by the Lanebro Manufacturing Company of Poughkeepsie, New York: 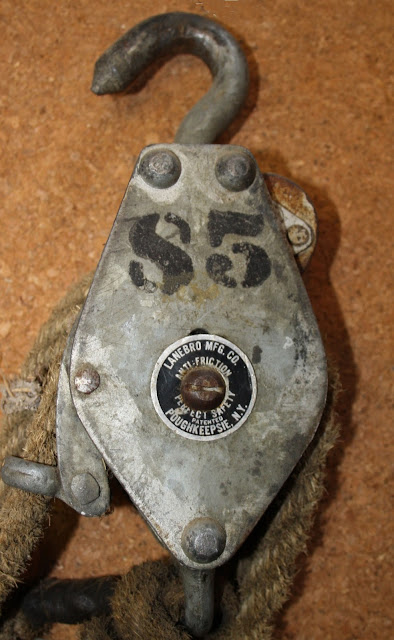 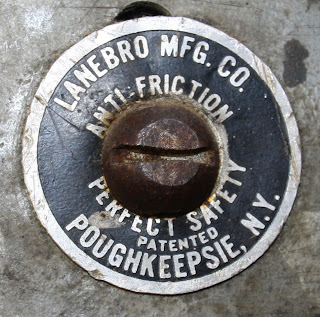 The Lanebro company was the successor to the Lane Brothers Company of the same city, with origins back into the 19th century.  Coffee grinders were an essential household tool in the 1800's.  In 1845, Beriah Swift built a factory in Millbrook, New York to manufacture his own patented coffee mill, partnering with his cousins William and John Lane under the name Swift and Lane in 1855.  The firm became the Lane Brothers in 1866.

In the late 1870's or early 1880's, they relocated to Poughkeepsie, New York.  (This city was home to the famous Smiths Brothers cough drops until 1972.

Samuel Morse (of Morse code fame) also lived here for 25 years, and both the Astors and Vanderbilts built palatial weekend homes in the area.)  The Lane Brothers had already added a coffee roaster to their offerings, and subsequently came up with a "patented self-measuring faucet." 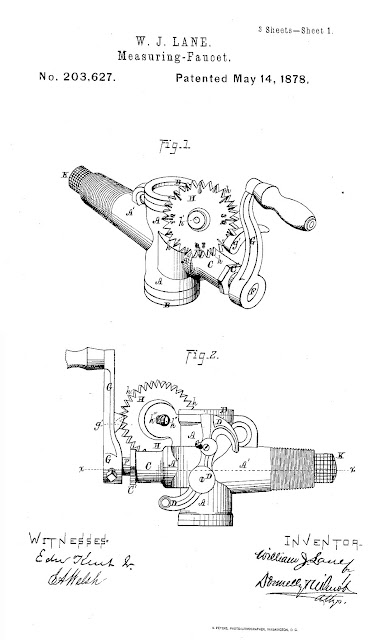 They also offered a patented top-hung hardware system for the pocket doors that were popular during that gaslight era.

Production of their "Smokestack" coffee mills (which included over 30 styles suited to grinding grain, spices and other commodities) continued until around 1920.  Sometime in the 1920's, the Lane Brothers company changed its name to Lanebro.  Other than manufacturing pulley blocks, there is little information on the later fortunes of the firm.

The Lane Brothers have another claim to fame.  Towards the end of the century, when they must have been well on in years, William, George and John were shopping for a Stanley Steamer (which first came on the market in 1897) and decided that they could build something better themselves.  So, in 1900 they formed the Lane Motor Vehicle Company in Poughkeepsie.  They offered a 2-cylinder steam engine that recycled excess steam back into the boiler, rather than exhausting it to the atmosphere, making their car more efficient and giving it more power.  Production was always modest and in 1909,  their banner year, they produced only 150 cars.  The company folded in 1910, and today there are only 2 surviving examples left in the world.