We still make things in this country! Original Miner's Lunchbox

I've got several of these old well-built aluminum lunchboxes that are perfect for use in the barn for storing things that I don't want the mice to chew: 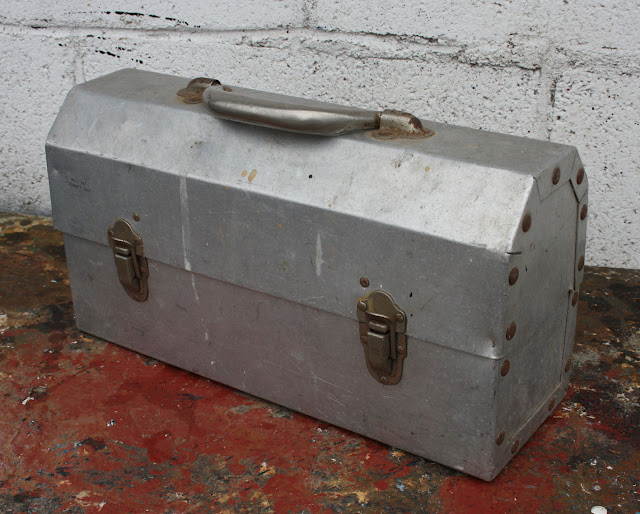 I had one out the other day, and noticed that it had a manufacturer's name stamped on it:

Lo and behold, they're still being made by May Metal Fabricators in Sudbury!  Here's their story from their website:

"In 1957, Leo May, a miner working underground at INCO Ltd, the world's major nickel producer, sat his black tin lunchbox on it's end to use as a seat while waiting for the "cage", the underground elevator system bringing men and supplies in and out of the mine depths.
The next thing he knew, he was flat on the ground, his lunchbox squashed. This was not acceptable! So, his inventive mind set about creating a Lunchbox that would hold the weight of a man and his lunch when there was no seat available (miners often ate their lunch "on the job", in field conditions without chairs or benches). Plus it had to be affordable for the miners, who earned $1.25/per hour at the time.


Working from a small workbench out of his basement workshop, he came up with a design that not only supported him but was built to last. When he showed up at work with his shiny new Lunchbox, he was immediately inundated with orders for 40 more! Soon, Leo's hobby evolved into a small company called L.May Mfg and to identify his lunchboxes, he modestly chose a small stamp in the most popular font of the day, and placed it in the upper left hand side, "just like the address on the letter", where that very same stamp shows today.
These engineering marvels were hand-produced for a few years, until demand forced him to invent unique automated equipment for mass production and in 1978, the company was incorporated under the name L. May Metal Fabricators Ltd. Leo's Lunchboxes became the standard for the mining and construction industry and virtually 100% of  INCO's 20,000 workers carried the Lunchbox from Sudbury. Many workers starting their mining careers at this time carried their same lunchboxes until retirement, a span of 30 years - some say they work like good luck charms......
Now, Leo's Lunchboxes are sold around the globe, as The Original Miner's Riveted Aluminum Lunchboxes and are now used in many innovative situations from industrial uses, featuring promotional items for advertising agencies, as fashion items, household uses, seen in movies and TV commercials - uses limited only by your imagination..........."


The lunchbox is also featured on the Canadian Design Resource site, where there are many testimonials about the high quality and longevity of the lunchbox.

Interestingly, the latches for the lunchbox were originally sourced from the Excelsior  Hardware Company of Stamford, Connecticut: 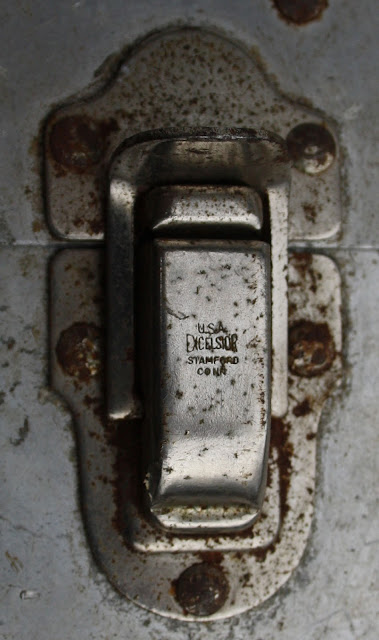 A story hangs on this as well.  Below, from a 1984 article on  Made in Stamford:  The History of Stamford as as Manufacturing Centre:

"In 1898 a David versus Goliath battle took place between Elisha Mix, Jr., founder of Excelsior Hardware, and the mighty Yale & Towne Mfg. Co. When Yale & Towne demoted Mix and cut his pay, he secretly worked after hours at his own lock-making company which he located in Bridgeport so as not to arouse the suspicions of Yale & Towne management. Mix came from a line of talented lock makers. His father, Elisha Sr., was a lock maker and his grandfather, James Mix, was a die maker for some of the first locks manufactured in the county. Soon Mix informed Yale & Towne that he was quitting to run his own firm, and the company promptly fired his son Moseley, who also worked for the lock giant. When Mix was unable to sell his Stamford home to move to Bridgeport, father and son moved the operation in 1901 to Woodland Avenue in the very shadow of the Yale & Towne complex. Excelsior Hardware Company has the distinction of being the oldest manufacturing company begun and still operating in Stamford. The first products manufactured by the firm were trunk and drawer locks. Excelsior later added suitcase and automobile trunk locks to its line. Today at its several locations in the South End Excelsior continues to manufacture a long and varied line of locks and luggage hardware."

Apparently, during the early years of the last century, immigration to Stamford was so immense that Excelsior actually had departments organized by language spoken!  The company's decline began in the early 1970's, when stricter pollution controls, the energy crisis, and foreign competition eroded its competitiveness.
Bankruptcy was declared in 1990 and the company closed it doors for the last time in 1994.  It had at least outlived its closest competitor, the Eagle Lock Company, which had folded in 1975.  There had been a failed attempt by a German firm to combine Excelsior with Presto Lock from New Jersey and transfer all operations to Mexico.  To add insult to injury, Robert Thompson, the company president, was convicted of stealing $600,000 from the company pension plan and sentenced to three years in prison. The pension plan was insured, so the pensioners were OK, but the company medical plan had lapsed without employee notice, so many employees were stuck with large medical bills. One employee, in poor health and worried about his pension, tried to commit murder-suicide but only succeeded in killing his wife. He spent his last years in a state psychiatric hospital.

According to The Stamford Historical Society:

"In January of 1990 a bomb scare emptied the factory, but no bomb was found. In March of that year, there was a second bomb threat. The day after the second threat a small fire in a second floor storage room was classified as arson by the Stamford Fire Marshall's office. On examination, it was found that above the storage room there were 22 boxes of brown paper lunch bags filled with Connecticut lottery tickets—several kinds, all denominations. When loaded in a truck for final disposal, these tickets weighed over 480 pounds (about 800 tickets to the pound), representing hundreds of thousands of dollars. The reason for Thompson's mishandling of company money was thus revealed as a gambling addiction."

Wow! This was just forwarded to me by a friend. I had to take the time to thank you for a great article and some additional information about Excelsior Hardware. I remember when my Dad had to switch suppliers for that hardware. Brings back some fond memories of days gone by. Next year will be our 60th anniversary. Now I produce coloured versions. We've sold about a million lunchboxes and every owner has their own library of stories about the World's Best Lunchbox, always told with a smile on their face. My father left me the company and a happy legacy. Thank you for my smile today. Catherine May Langin