HMS Glowworm versus the Admiral Hipper 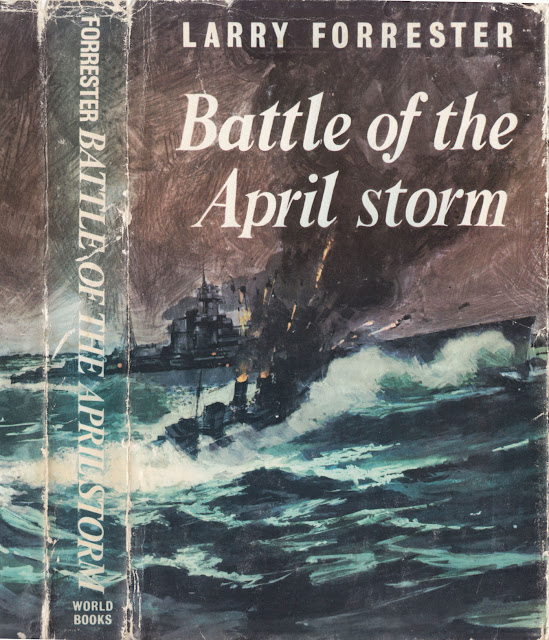 Larry Forrester was a Scot who served as a fighter pilot and who later wrote many TV and movie scripts, including the screenplay for Tora, Tora, Tora!  He also wrote Fly For Your Life, a biography of the celebrated British fighter pilot R.R. Stanford-Tuck.

Battle of the April Storm is a novel first published by George Harrap & Co. in 1969, with the World Books edition following in 1970.  It recounts the heroic action of HMS Glowworm, a G-class destroyer that was involved at the beginning of the Norwegian campaign.  On April 8, 1940, she engaged two German destroyers escorting troop carriers headed for Norway.  The Germans called for help, and the cruiser Admiral Hipper was brought into the action.  Glowworm's 4.7-inch main armament was naturally no match for the the cruiser's 8-inch batteries.  Glowworm was heavily damaged in the engagement but persisted like the sea terrier that she was.  She eventually rammed the Hipper, breaking off her bow, scraping its side and then floating away sinking and on fire before her boilers exploded, taking 109 of her crew to their death.  The Hipper stopped to rescue survivors.  The Glowworm's commanding officer, Lieutenant Commander Roope, was almost rescued, hanging onto a rope at the side of the German cruiser before losing his grip and falling into the sea.  He was posthumously awarded the Victoria Cross, the first recipient in World War II of this highest of decorations.  The VC came in part as the result of a recommendation made via the Red Cross from Captain Heye, commander of the Admiral Hipper, who wrote the British Admiralty expressing his admiration for the valiant courage of the Glowworm's captain in persisting in such a one-sided fight.  This is the only occasion in history when a British VC was recommended by the enemy.

The book is a good read.  However, be aware that not all of the Glowworm's survivors were pleased by Forrester's fictional version, particularly his portrayal of the captain.

For more information and pictures, see HMS Glowworm, a tribute webpage from the nephew of a seaman who died during the battle.