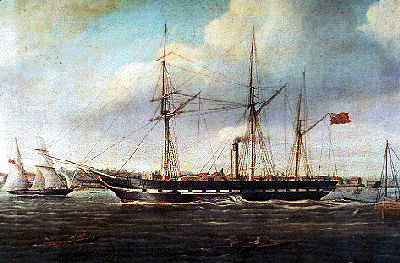 A blurry distinction but this Quebec-built ship is considered to have made the first steam-powered Atlantic crossing. Apparently in both 1819 and 1827 other ships had made the journey partly under steam, partly under sail, but the Royal William is said to have used steam power exclusively.
After a cholera outbreak had restricted her travels in Canada, her owners (who included John Molson and Samuel Cunard) decided to send the ship in England in order to sell her. She left Pictou N.S. on August 18th 1833 and arrived at the River Thames 25 days later, burning 330 tons of coal in the process.
The Royal William was sold to the Spanish navy on Sept 10 1834, renamed the Ysabel Segunda and earned another distinction- the first steam-powered ship to fire a shot against an enemy.

On this day the Royal William, the first steam-powered vessel built in Canada which was designed to go to sea, was launched from Campbell's shipyard at Wolfe's Cove, near Quebec City.  Lady Aylmer, wife of the Governor-General, christened the ship, naming it for the reigning monarch, William IV; as Prince William Henry he had been the first member of European Royalty to cross the Atlantic and visit North America.  A few days after the launch, two engines of 80 horsepower 60 kilowatts each were installed.  The total cost of the ship was £16,000 sterling.  The vessel's sea-going capability was necessary for the Halifax - Quebec route, which included 150 miles 240 kilometres on the open Atlantic between Halifax Harbour and Chedabucto Bay at the entrance to the Gut of Canso (Canso Strait).  At that time there were no weather forecasts beyond such things as "red sky at night, sailors' delight", and each trip required about 18 to 20 hours' exposure to whatever the Atlantic Ocean had to offer.

The diary of the Quebec Exchange, as published in the Montreal Gazette, shows that Royal William was launched on Friday, April 29th, 1831, in the presence of His Excellency Lord Aylmer, and named by Lady Aylmer after the reigning king, the band of the 32nd Regiment attending.  Royal William arrived at Montreal, May 2nd, 1831 and sailed from Quebec, August 24th, 1831, on her first trip to Miramichi, New Brunswick, Prince Edward Island, and Halifax, Nova Scotia.  Royal William finally left Quebec for the last time for London at 5am Of August 4th, 1833...
Posted by Mister G at 11:21 PM