I found this tin of flake graphite buried in junk on a shelf at the back of a shed, and I loved the graphics on it: 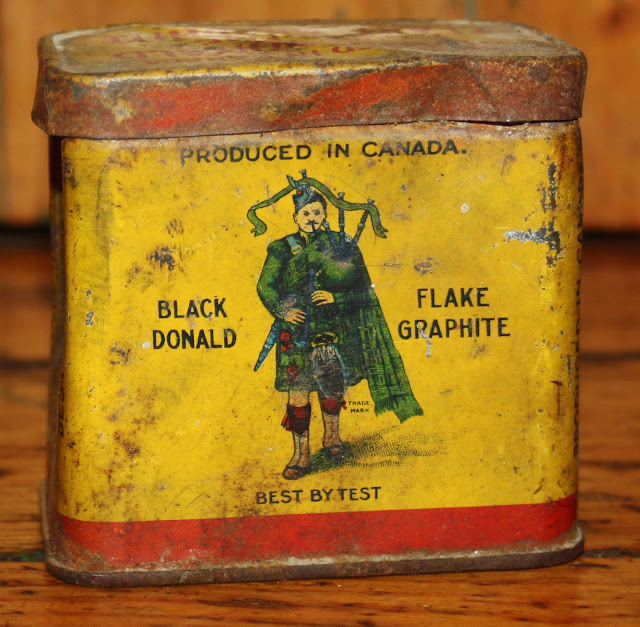 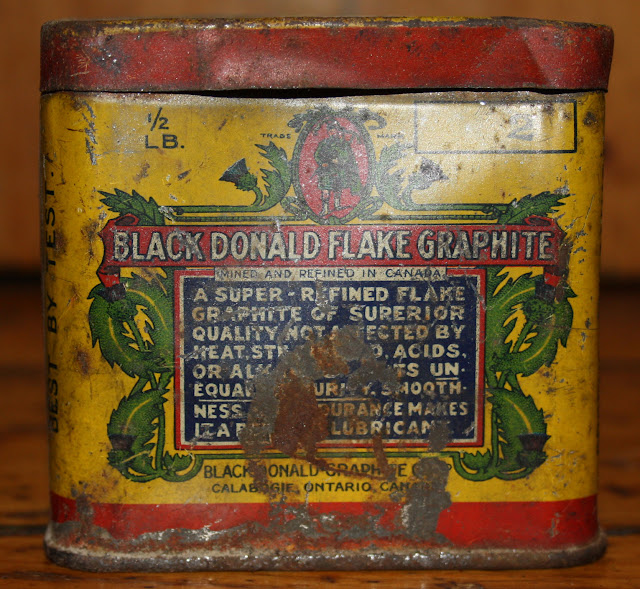 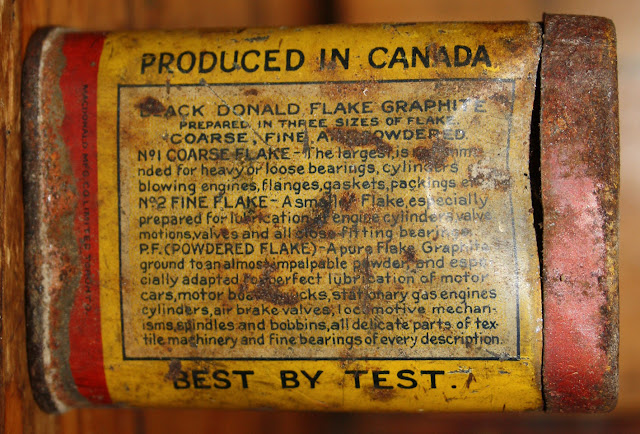 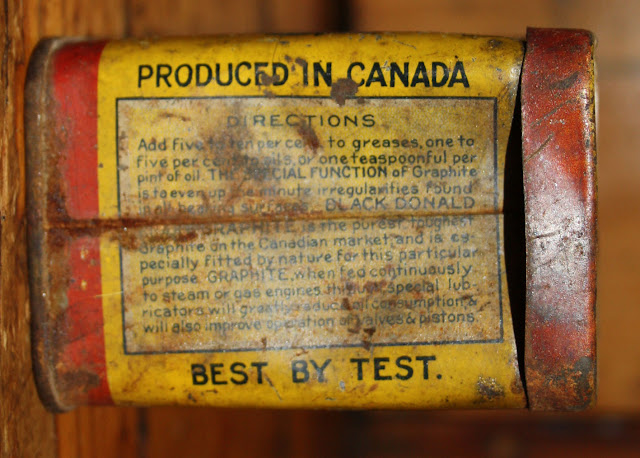 I was also intrigued, because Calabogie (best known for its skiing) is just a couple of hours away from where I live, along some of the best motorcycle riding roads in the area.


On a rainy day in June 1889, John Moore was rounding up his cattle when he slipped and fell on a moss-covered slope on the shore of White Fish Lake in Renfrew County, Ontario.  He discovered that under the moss was a vein of solid graphite, 8 feet in width.  The next day, he chopped out some samples, but it wasn't until six years later that he was able to sell the mineral rights to the Honourable George McKindsey for $4000.  While this was a lot of money for a poor farmer to acquire, McKindsey flipped the rights the very next day for $42,000 to a group of investors who created the Ontario Graphite Company. In 1896, mining operations began and over the next 50 or so years generated over 20 million dollars for its owners. The company built a town on the Black Donald mountain range for the workers.  The mine eventually extended underneath White Fish Lake, until 1901 when rains brought a cave-in which flooded the operation.  A new mill was built 3 miles south of the mine, and a powerhouse was built on the Madawaska River.  This electric power was harnessed to access the ore, making Black Donald the first community in the district to be electrified.  Initially, the ore was carried 30 miles down to the railhead at Calabogie by horse and wagon, with 10,000 pounds per tandem wagon, and via a shorter route over the ice during the winter with as many as 14 teams at work at any one time.  Finally, a road was built through the bush, cutting the distance to 13 miles and eventually trucks replaced horses.  In 1908, it was operated by the Black Donald Graphite Company. 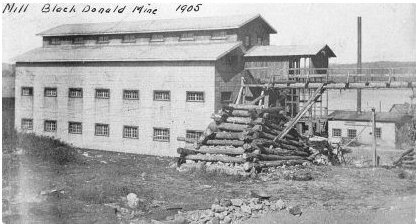 By 1938, the underground ore was exhausted so the company turned to processing the old tailings, pumping them from the lake.  World War II accelerated demand for the product, and the government paid Frobisher Explorations Limited to investigate the mine's potential.  They concluded that 40,000 tons of ore could still be extracted.  Frobisher purchased the mine and over the next 10 years, sixty men worked in 3 shifts, eventually mining even the support pillars of graphite left in the old workings 300 feet down.  Around dinnertime one day in 1950, the manager of the general store heard a huge roar and he looked to see a gigantic whirlpool open up in the lake, with water pouring down into the centre for over two minutes. The mine had been catastrophically flooded, and air pressure blew timbers, concrete and buildings high into the air around both the working and capped shafts.   All mining eventually ceased in 1954.

The Black Donald mine operated for 58 years and produced around 90 percent of the total graphite mined in Canada, with the loss of only one life over its entire working career.  After the mine was exhausted, the town naturally declined.  In the 1960's, Ontario Hydro bought up the properties, built the Mountain Chute dam and flooded 8500 acres, including the former site of the Black Donald mine and village.  Subsuming the previous White Fish Lake, the new reservoir took six months to fill, and created a new lake, renamed Centennial Lake in 1967.  The remains of the drowned village and mine are now visited by some as an interesting underwater dive site.

All that's now left above ground to mark it is an historical plaque.

I have several times ended up at the Mountain Chute Station on motorcycle rides, and always wondered what this huge damn and generating station was doing there.  An old can of graphite solved the mystery.
Posted by The Duke at 10:23 AM

ix the tin for sale? ron_sinclair_5@sympatico.ca

Make me an offer!

This wil at sometime be donated to a museum. I am NOT buying to make money . I live in Renfrew which is not far from where the mine was. I also worked as a miner and mine rescue in northern Ontario

Has it been Sold? I'd be willing to buy it, would you take $75 for it. It is also going to be used towards Calabogie's history preservation. We want to use it as a display in our local farm store to have when telling the story of Black Donald. You can email me at johnnymslack@gmail.com Thanks :) and merry christmas.

Sorry, Johnny, but I sold it to the previous commenter.

I just found a black donald tin.
blackhole_jaffekree_gatestar@yahoo.ca
For sale