We used to make things in this country #17 : Cooey Machine and Arms

The Cooey Model 39, a basic single shot .22 caliber rifle, made by the Cooey Machine and Arms Co. of Cobourg.
This model was introduced about the beginning of WW2 and was in production for about about 25 years, with over 60,000 sold. This particular one dates to the late fifties but serial numbers were never used, so it can be difficult to figure out the date of manufacture- if it matters.

The Cooey company was founded as H. W. Cooey Machine & Gear in Toronto in 1903, specialist in machinery and tool design. During the First World War the company made mechanical parts including Ross Mark III folding peep sights and became known for high quality design and production.  After the war they moved into the design and manufacture of civilian firearms including an internationally recognized single shot .22. The resulting sales caused the company to seek larger manufacturing facilities and in 1929 the Cooey Machine and Arms Company moved from Toronto into a 4 story building in Cobourg.
During the Second World War the company produced war materiel, including arms, parts and training rifles. Postwar the company again prospered making many different models of sporting rifles and shotguns, largely for the Canadian market.
In 1958 Cooey's son, who was by then running the company, died suddenly. His father (and founder) retired, selling the company to Winchester in 1961. Winchester retooled for larger production and ran the company until the late 70s when labor and political problems closed the factory. The manufacturing equipment was sold to Lakefield Arms Ltd. of Lakefield, Ontario. Total firearm production of this company is estimated to be in the 12 million unit range. 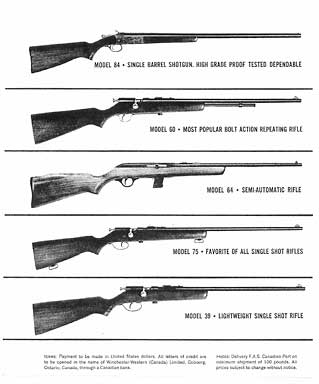 Very interesting article! Everybody knows someone who owns or has owned a Cooey rifle, but very few people know that they used to be made in Canada. Actually, I didn't know that fact before I read this article...