We used to make things in this country. #215: Wear-Ever cookware 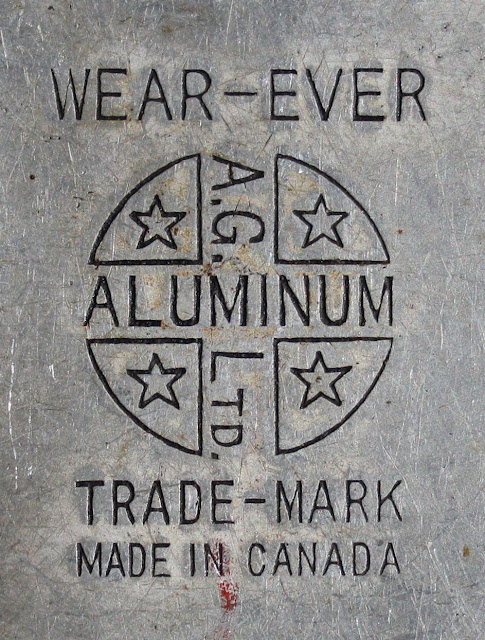 I've got several heavy aluminum pots and mixing bowls that I use in my shop for various tasks.  Cleaning one the other day, I noticed the stamp above on the back of the pots.

First produced in 1825, aluminum was prohibitively expensive to produce and was therefore classed as a semi-precious metal.  On February 23, 1886, while working in a woodshed in his kitchen in Oberlin, Ohio, Charles Hall discovered an inexpensive method of smelting aluminum out of bauxite and founded the Pittsburgh Reduction Company in 1888, which became the Aluminum Company of America (ALCOA) in 1907. As a way to increase the market for this new material, Wear-Ever cookware was launched in 1903, initially sold door-to-door by college students. In 1912, the U.S. Marine Corps officially adopted the brand as their standard issue.  In 1909, Admiral Robert Perry took examples of the brand to the North Pole.  (As seen on the 1919 ad below, the name "Wear-Ever" became an awkwardly worded slogan  "Replace utensils that wear out with utensils that Wear-Ever!")

In the parent U.S. version, the trademark had "Tacu Co" vertically in the centre. These were the initials of The Aluminum Cooking Utensil Company of New Kensington, Pennsylvania.

In Canada, the products were stamped "A.G. Ltd."  I have been unsuccessful in discovering the actual name of this company.  However, the Wear-Ever products in Canada were made by the Northern Aluminum Company, founded in Shawinigan, Quebec in 1902.  (In 1925, it became the Aluminum Company of Canada, better known as Alcan). In 1913, the company opened a kitchen utensil plant and foundry in Toronto, and a rolling mill a few years later.

Since 2006, Wear-Ever has been a division of Groupe SEB which claims that "Every second, 6 products from Groupe SEB are sold somewhere in the world."
Posted by The Duke at 9:45 AM

A lady friend of mine uses the WearEver Cookware and she’s got lots of positive things to say about them, including the heavy aluminum pots and mixing bowls. I also find stainless steel cookware to be quite resourceful. See some designs here: http://hikingmastery.com/top-pick/best-cookware-material.html

Used a 10 inch wide, 7 inches deep Wear-Ever pot today I had forgotten I inherited with the logo TACUCO vertically as shown above. There was a "No. 2208" stamped on as well. Any idea of age ??

Yo Jim.... Masonboro asked you a question like 18mos. ago & you haven't answered the question, nor even acknowledge the person who's inquiring about an amazing piece of early Americana, the industrial boom, also (this is one man's opinion) I wholeheartedly believe that no 2 Tea Kettles are or will ever be the same, which tells me that artisans, craftspeople, very talented creative minds were given the chance to express themselves through design and uniqueness of the highest quality I've ever laid eyes on personally, which reminds me of "American Folklore Arts & Crafts". Honestly I'm no expert, well educated, armed with ammo to stand my ground, and the ground in which I stand is that from my upbringing. Meaning long story short, my mom was born August 20, 1910 and being the people who they were, I grew up surrounded by her grandparents furnishings, paintings, & things, etc.... Therefore I believe that I'm an authority whenever it comes to antiquities and such. However the question directed to you remains unanswered.... NUFF SAID

Our family has used WearEver that is stamped Made in Canada for the past 67 years.

I inherited my mothers wear.ever pots and pans. The stamp on the bottom of mine is No. 302. Was wondering what year they might have come out?

When my parents passed, I inherited their Wear-Ever roaster pan. I used it tonight. My Dad sold Wear-Ever. It was just the right size for what I needed tonight and it brought back great memories of my parents. I will pass it on to my daughter.

Thanks for the note and favourable review!

Hi All, I have an Aluminium Wear-Ever No. 4810 Mug and would like to find out it’s value. It has the trade Mark stamped into the metal on the bottom of the mug. I haven’t seen any for sale anywhere on the web. I’m hoping one of your reader can help. Thanks

I have a tall 10" Wearever TACO Co Aluminum coffee pot complete with 2 strainers. Does anyone know how these strainers are to be used? Together? SSeparately? Any info would be appreciated.
Thank you,
Dorothy

I believe I have a cake were ever cover not sure