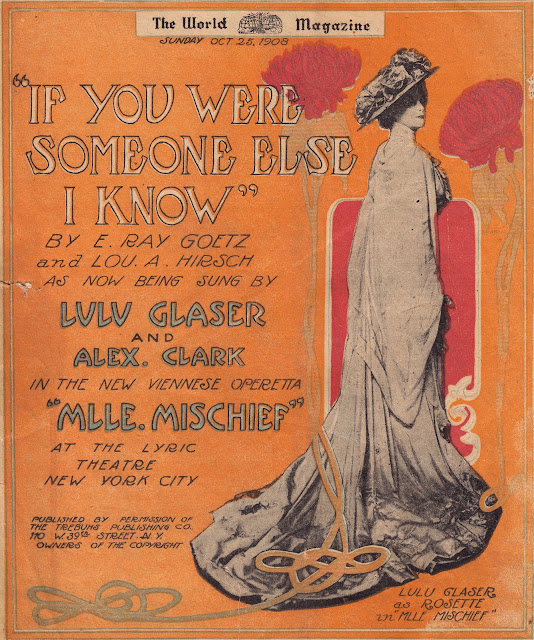 A very old piece of sheet music I found a while ago.

"Mlle. Mischief" was a musical that played at the Lyric Theatre from September 28 to November 29,1908, and for the next two weeks at the Casino Theatre.

In the lyrics, the female singer refers to her paramour as "My Motor Papa."  Hmmm.

Edgar Ray Goetz (1886-1954) was an American composer, author of such songs as "Yaaka Hula Hickey Dula."  His sister married Irving Berlin, but she died tragically six months later of typhoid fever contracted during their honeymoon in Havana, Cuba.

Louis Achilles Hirsch (1887-1924) was another American composer behind such favourites as "The Tickle Toe" and "My Sumurum Girl."  According to his Wikipedia entry, one of his memorable experiences is one most of us can relate to:


On May 27, 1920, Hirsch sued the New York Yankees for $100‚000 because of an incident at the Yankee game at the Polo Grounds on the 24th. To avoid sitting next to a cigar smoker‚ Hirsch switched seats with his brother. An usher informed him it was against the rules to shift seats and ordered the two brothers to switch back. Hirsch refused and was forcibly ejected from the stands.


The usher may well have been a jerk but, in the jargon of an earlier era, the cigar smoker was Achilles' heel.
Posted by The Duke at 9:58 AM