Long ago, I picked up an Apkoway No. 238
speedo inner cable squaring tool at a vintage bike rally: 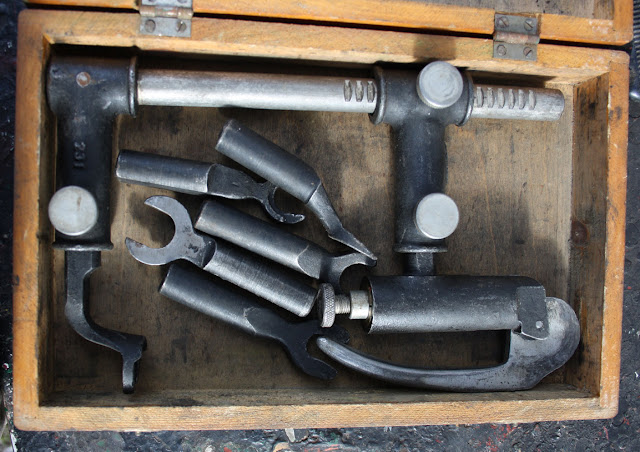 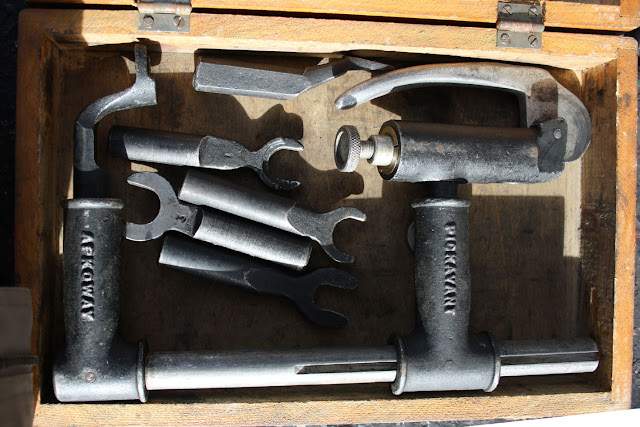 The company made impressively robust tools!

(To see some other old Pickavant tools, go to Old Classic Car).

I'd love to know the story behind the choice of such an awkward brand name as "Apkoway."  It doesn't exactly roll off the tongue.

Jack Pickavant founded his company in 1921, marketing motor accessories, spares and tools.  His first salesman was Joe Sykes.  By the end of the decade, the company had begun manufacturing specialty service tools for mechanics.  In 1931, Sykes left to form his own tool distribution company, moving into manufacturing after World War II to address the demand for home-grown tools created by import rationing in Britain.  Sykes overseas markets were Australia, New Zealand and South Africa.  In 1968, Sykes and Pickavant merged, forming Sykes-Pickavant.  In the following decade, they built a new factory in Lytham, St. Annes.  By the 1980's, 40 percent of their business was in the export trade. That's when they were acquired by the French conglomerate Facom.  In 2005, Facom itself was acquired by Stanley.  Recently, in an unusual turn of events in the tool-making world, Sykes-Pickavant broke away and became once again an independently owned company.

I believe the "Apkoway" name is taken from the Apkoway Ironworks in Birmingham where the company was once based. But I don't know if the works was already named that or if the company named it.