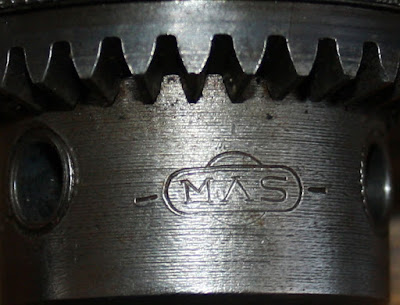 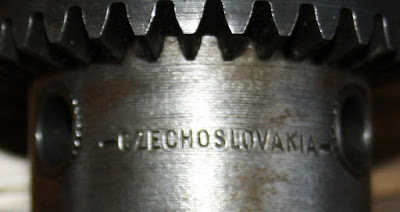 My 11" Standard-Modern lathe came with a MAS chuck on the tailstock.  To date, I have been unable to source the correct chuck key for it.

KOVOSVIT MAS a.s. is a machine tool manufacturer located in Sezimovo Ústí, Czech Republic.  It was started in the city of Zlín in the region of Central Moravia in 1936.  In 1938, recruitment problems prompted the company to consider moving to Slovakia, but the German occupation of that country stopped that plan.  At that time,  the company created the MAS brand (meaning Moravian and Slovakian Machine Works), which in 1939 became the Moravian Incorporated Machine Works.  It moved into a new plant in the city where it remains located. Bicycles were added to its production during the war years, and in 1949 it became a state-owned enterprise, Kovosvit Sezimovo Ústí.  In 1953, production of horizontal milling and boring machines was transferred to the company from the famous Škoda works.  In 2010, the company became a member of Bonatrans Group, one of the largest manufacture of railway wheels.  In 2011, the company's main shareholder became London-based FPK Capital.

As an aside, the city of Zlín is where Tomáš Baťa founded his footwear company, Bata Shoes.  Zlín is dominated by the so-called Baťa Skyscraper, which was the second highest building in Europe when it was built.  In 1939, the family opened a new headquarters in a factory town north of Trenton, named Batawa.  Following World War II, the company lost its holdings in the Czech Republic, and rebuilt from its new headquarters in Toronto.  It has long since abandoned Canada, closing the Batawa factory in 2000 (which eliminated over 200 jobs) and moving its headquarters to Lausanne, Switzerland.

According to a CBC news report at the time:

The factory in the town of Batawa was opened sixty years ago. Back in 1979 it was putting out 4.6 million pairs of shoes a year. That's now down to just under one million.

A company spokesperson says the problem is imports. He says 25 years ago, half of the shoes sold here were made here. As of last year, Canadian shoes accounted for less than 10 per cent of the market.

As of 2013, the former shoe factory in Batawa was being converted into an up-scale condo.  I can't find any more current news, so perhaps this project faltered.

I know this is an old post at this point, but if somehow you are still looking for the key, those M.A.S. chucks with key are available on EBay from around $20 shipped.