One of my vices is vises: Palmgren No. 000 angle vice 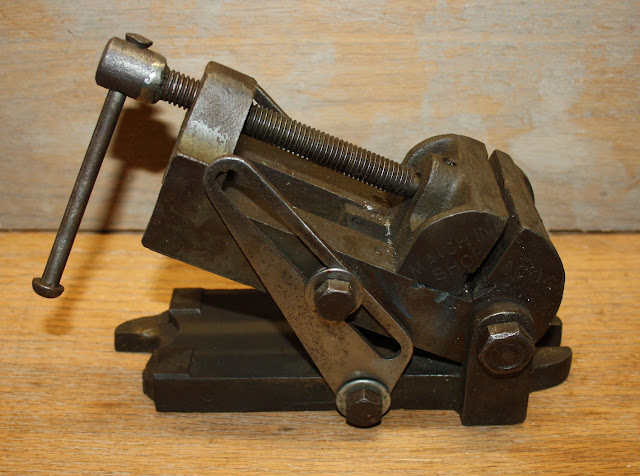 My Palmgren No. 000 angle vice had already undergone various repairs when I acquired it.  As you can see, one of the mounting lugs is broken off, and someone has previously had to braze the handle back onto the screw.  This looks more like the results of user abuse than build quality. Nevertheless, comments from various machine workers forums about the make, even in its heyday, are not flattering. Someone even commented that the company was making Chinese-quality tools before the Chinese got into this market. Still, someone else claims that the company made some of the vises that Sears sold under its Craftsman label.  If so, they couldn't have been that bad.

The company advertised heavily in Popular Mechanics.  The No. 000 angle vise was their most expensive model, selling for the princely sum of $11.95 in 1959.


The company has a relatively long history.  Clarence Palmgren founded the Chicago Tool & Engineering Company in 1919.  In addition to vices, they made more complex tools like rotary tables and milling attachments for metal lathes:

The fact that they advertised under the trade name "Hobb-E Tools" indicates that they marketed more to the home DIY market than to industry:


At some point, they changed their name to Palmgren Steel Products.  In 2013, they were acquired by C.H. Hanson.  According to their website, that company was founded in 1866.  They add:

CH Hanson remains a family business, with the fourth and fifth generation Hanson’s running the company. It’s not often that a company remains in one family for 150 years, and the Hanson’s credit their success to the Lord’s provision. Upon reflecting on the history of their family’s company, Craig and Phil thank God for His grace and mercy and continue to build the company on strong, faith-based principles.

According to the aforementioned machinists' forums, much of the Palmgren stuff is now sourced from China.  God surely works in mysterious ways.