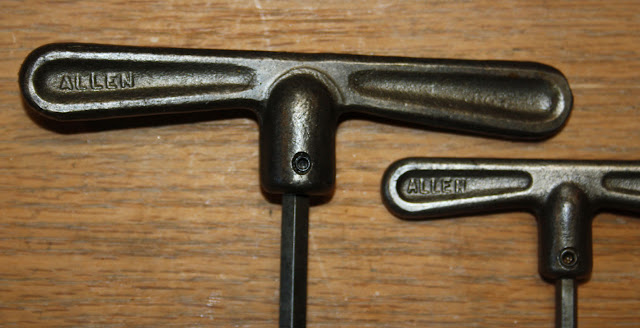 Above, some of my older Allen-head keys with cast iron tops.  Very handy to keep by the milling machine using rare-earth magnets. 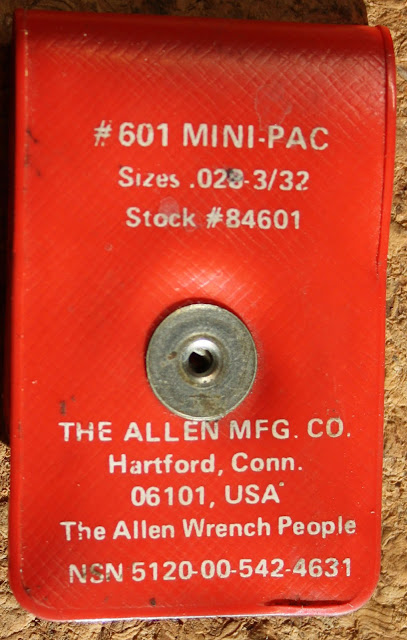 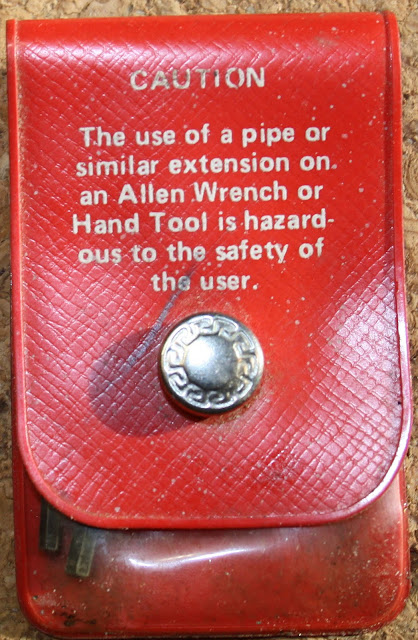 In 1910, William G. Allen received U.S. Patent 960,244 for a cold drawing process for making hex socket set screws. (He assigned half of the patent to Ira Dimock, an inventor in his own right, President of the Nonotuck Silk Company and presumably one of his financial backers.)

Allen called these "safety set screws" because they reduced the chance of clothing getting snagged on protruding fastener heads on spinning machinery.

William Allen didn't stay with the company he founded for long, and left to pursue other ventures. The company itself didn't get around to trademarking the Allen name until 1943.  In 1956 the Allen Manufacturing Company was bought by the Chicago Pneumatic Tool Company (confusingly enough headquartered in New York).  Chicago Pneumatic already owned several other well-known tool firms including The Jacobs Manufacturing Company and the Matco Tools Corp.

The factory was moved from Hartford to a newer facility in nearby Bloomfield in 1958.  I assume, though, that its headquarters remained in Hartford, since the address printed on my plastic case puts it there, and also has a zip code which dates it from 1963 and later.  In the 1980's, the company began to shift some fastener production to Asia, while maintaining a major manufacturing facility in Bloomfield, Connecticut and a warehouse in Weston, Ontario (under the name International Fasteners Limited.) In 1986, Chicago Pneumatic was bought by the Danaher Corporation.  This ultimately became The Apex Tool Group, which continues to make screws under the Allen brand in their factories in Dallas, Texas and Shanghai, China.  The original Hartford Company, however, is long gone. Hartford itself, which helped spawn the American industrial revolution, has since become one of the poorest cities in the U.S., with 3 out of 10 families living below the poverty line.

To watch a short video on the Allen Manufacturing Company, go to Hidden History: The creator of the Allen wrench.

As an interesting aside, Howard T. Hallowell, who with Harald F. Gade founded the Standard Pressed Steel Company of Philadelphia in 1903, claims that his firm was the first to develop the socket head cap screw, producing them in 1906.  They called their version "Unbrako" (to associate it with "unbreakable"). However, he doesn't provide any evidence to back this up, and google patents doesn't return any patents of this nature assigned to him or the company. So, it remains something of a mystery how his company managed to produce and market these fasteners in apparent violation of Allen's patent.

In 1920, the firm moved to the Philadelphia suburb of Jenkintown, and in 1937 the Unbrako Socket Screw Company was founded as a related business entity. The parent company became SPS Technologies in 1978, in which capacity it made high-tech fasteners for NASA. In 1999, their Unbrako Engineered Fasteners division made special vibration-resistant fasteners for Polaris Industries, Inc.  Polaris bought the Indian motorcycle rights in 2011, so I'm sure that the SPS products stood them in good stead.
Posted by The Duke at 9:53 AM