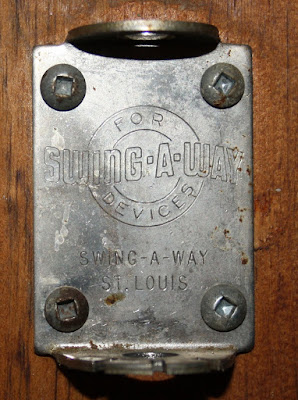 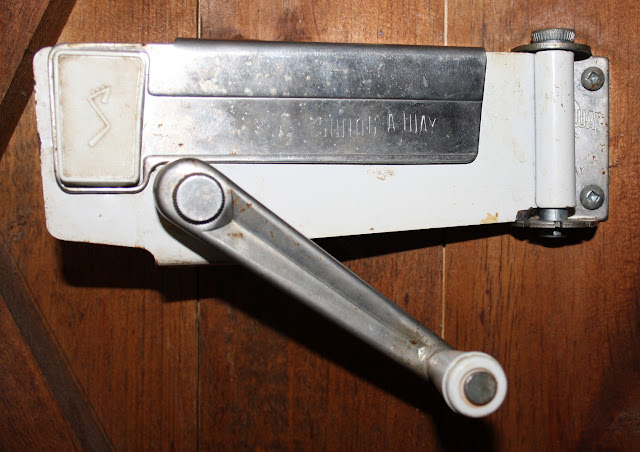 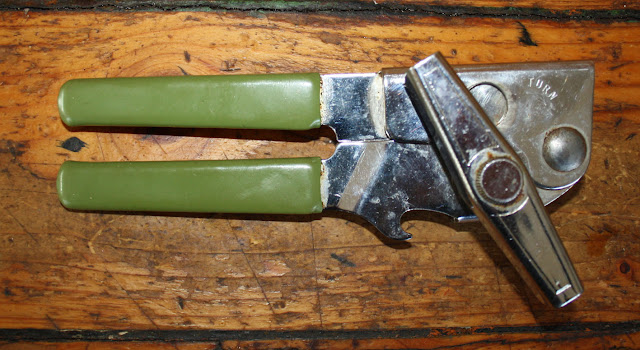 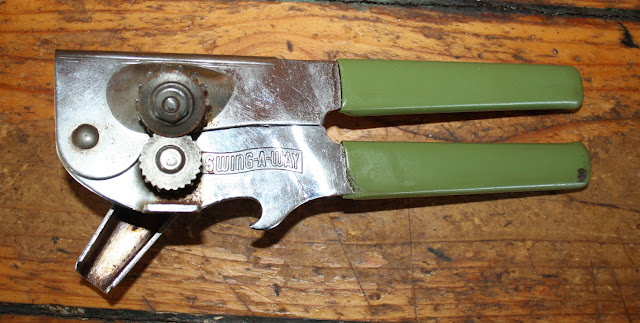 Above, my two Swing-A-Way can openers from decades ago, both of which continue to give good service.  In contrast, most of the current (Chinese-made) ones on the market are terrible.  They often fail to pierce the can, they roll off of the rim, and generally are frustrating and ineffective to use.

Idus Rhodes started out selling his Kriss-Kross shaving blade sharpener that was endorsed by baseball Hall of Famer Rogers Hornsby, but the advent of the penny disposable blade ended that enterprise.  Legend has it that he took someone's suggestion to make can openers, despite his initial reaction that "there isn't a can in the world you can't open with an ax."  He came up with his Swing-a-Way in 1938 as a wall-mounted can opener with a bracket permitting the unit to be, well, swung away when not in use.   In 1945, the company pioneered a gear-driven cutting wheel that revolutionized can opening. By the 1950s, new homes built for the families of returning GIs lacked the solid wood pantries of an earlier era. With no place to hide the hand-cranked, wall-mounted opener, Rhodes wondered who would buy it. The company responded with the first heavy-duty, hand-held can opener, the legendary Model 407, that incorporated the best features of the wall model. Soon after its January 1954 launch, it became a hit: between 1954 and 2005, the company sold 200 million of the devices. The opener has carried the Good Housekeeping Seal for decades, and was the first in space, selected by NASA for Skylab (although why they'd send heavy tins into space is beyond me, but I'm not a rocket scientist). In 2005. HFN, the New York-based home products newsweekly, named the Swing-A-Way one of the 75 most important household products in 75 years.

Swing-A-Way Manufacturing Co. has a simple recipe for surviving in a global economy while subscribing to an almost old-school, quaint focus on high quality and customer service.

"We try to be incredibly efficient," vice president Mark Packer said, "and we try not to be greedy."

Analysts say most U.S. manufacturers of kitchen gadgets have been purchased and incorporated into larger housewares companies that have outsourced their production -- at great cost-savings -- to China. Swing-A-Way resists that trend, Packer said, because it can't guarantee the quality of something it hasn't made.

Swing-A-Way, whose 1948 plant is in an industrial and working class neighborhood of south St. Louis, inspires about 50 fan letters a year, Packer said, from loyal customers as far away as Australia and Czechoslovakia.

Still, the company, which has 70 employees, has to "fight the cost battle on a daily basis."

The company was family-owned for decades.  The last member of the family to run it was Pierce Rhodes, the nephew of the founder. Pierce had added the magnetic holder to the can opener, and invented machinery to streamline the manufacturing process. The Rhodes family fought the good fight, trying to keep their business going in St. Louis.  With 80 employees, it was the largest manufacturer of can openers in the U.S.  It also made other household products such as ice crushers, jar openers and cork screws.  However, Pierce Rhodes passed away in 2003 and in 2005 the company was sold to Focus Products Group of Vernon Hills, Illinois.  In 2009, the St. Louis plant was closed and all production was moved to China.  Swing-a-Way is now a brand of AMCO (and the logo now has TM after it).  Online evaluations are generally not kind.  I've read, however, that the John J. Steuby Company of Hazelwood, Missouri, makers of the EZ-Duz-It can opener, bought all of the St. Louis machinery, which it now uses to produce its own brand of can opener. It's the only American-made can opener available today.  The reviews on Amazon are extremely positive.

For an American(?) company, Swing-A-Way makes some real crap. My hand-held Swing-A-Way can opener is less than 6-months old, and it is covered with rust. Yes, I clean it often, by hand, and dry it, before stowing it in a drawer. It appears Swing-A-Way uses cheap steel and cheap chrome plating in their manufacture of this door stop. My home is quite dry, as I live in the NE part of the USA. Humidity levels never exceed 35-40%, so it's not the humidity in the air. The Swing-A-Way worked fine for a few months, now, it's coated in rust. what a piece of crap. I go out of my way to buy American made producrs, but this POS really sucks. Never again!

You apparently didn't read my post. Swing-a-Way products have been manufactured in China for the last few years. If you're unhappy with your recent purchase, then buy an American-made EZ-Duz-it.

Thanks for writing about this. Back in the late 70's I made the cutting wheels for Swing-Away. Coincidentally, in the early 90's I was in machine tool sales and sold a surface grinder to Pierce Rhodes. I really liked him, and enjoyed watching the assembly process.

I worked at Swing-a-way from 1994--1996. I enjoyed working there. The quality of material used was good at that time. We had to make sure each opener worked like it was supposed to before it got sent down the line for packing. I believe if it wasn't at least a "good" opener the company would not have manufactured as many as they did for so many years.

After reading this info some time ago. I bought an EZ Duz It. It works like a champ. It is bullet proof. It is Made in USA and anazingly it was only a couple of bucks more than the Chinese made Swing Away.

Where did you purchase your EZ Duz It can opener?

Saw them online at sierra valley trading co. - all USA made products

I have owned a couple made in USA Swing-A-Way 407's, purchased many years ago and given away or lost in the meantime. You never doubted they would open a can. In my search for a decent opener I bought one of the EZ Duz It units a couple years ago. It has never worked right - it leaves about 3/4" uncut, which is usable but kind of a hassle. In a recent stay in a hotel suite the kitchen had a Made in U.S.A 407, it worked well, like I remember my old ones. Today I purchased a new Made in China Swing-A-Way 407 ($6). It worked great on the one can it has opened. So that's kind of ironic.

I'm going to see if the Easy Duz It company will make good on this. I did buy it because it is Made In USA, I want it to work.

Well, I got interested. Turns out the Eazy Duz It was assembled incorrectly. Comparing the two showed a few differences, the functional difference was the drive axle protruded on the Easy to the point it the drive cog wasn't engaging the rim. A little work on the bench grinder and it now opens cans like a champ - at least as good as the Chinese one! It's going to rust a little but i don't care about that.

Yeah I have an OLDER swingaway, and it's lasted well... BUT the steel cans are now getting such THIN soft steel tops, that the steel just stretches under the cutter - kind of like pulling on plastic wrap....

The OLDER opener is great... the cans are crap.

I sell vintage Swing-A-Ways on eBay -- only the Made in USA versions. Still a strong market these -- built to last, which is so rare these days. Thanks for all the background information on these gems.

Current reviews for the exduzit are poor. Another one bites the dust.

I have also seen some poor reviews for the Ez-Duz-It. Some of these complaints may stem from improper assembly or out-of-tolerance parts. However, scuttlebutt on the web indicates that the sales department of maker John J. Steuby Company in Hazelwood, MO will make good on new defective openers. Some of the problems stem from the new thin steel lids used on some cans today, such as Manwich cans. I have found turning the opener 90 degrees to cut the very top of the wall of the can (rather than the lid) solves this problem. However, this leaves a very sharp top of the can wall. Also, people should know this old school technology is not stainless steel nor dish washer safe. The opener should be hand washed and dried.

Swingaway is not what it was 40 years ago. I have purchased 2 and they do not open the cans. I will never buy another one. I hate to see a company go under but, they should have kept up with the quality. They were concerned with making money and forgot about quality. Shame on Swingaway

I bought my Swing-Away can opener25 years ago for $10.00.It has worked better than any can opener (including electric) the entire time.To take care of the periodic rust,just use a wire brush on the gears and wash with dish detergent.It will clean up like new. Rate it 5 Stars.

I'm sad. Everyone raved about how great Swing-A-Way can openers were. Before I bought my Swing-A-Way, I tried two others including OXO. Today I tried my new Swing-A-Way. The handle broke. I'm not a hulking person and I know how to use a manual can opener. It just twisted right off. While I would like to send it back or return it, I live in South Florida and the COVID is rampant.

The original American manufacturer is now making them again as EZ-Duz It (sp?).

We have a 20 year old Swing Away, that has severed us well but was getting worn out. Some quick searches on the web and I found Sierra Valley Trading Company that not only sell original USA made Swing Aways (old stock) but also has made in USA rebuild kits for the Swing Away. I installed the rebuild kit and it is back to like new.

Check out Sierra Valley Trading company (they only deal in made in USA) if you do not want to try the EZ-DUZ it.

Hello,
I’ve had a metal device in a an old tool box for over 30 years and never knew what it was. I recently cleaned it with a dremel tool wire wheel and could finally make out the words on it. Swing a Way devices , St. louis Missouri. Could i send you a photo and see if you could identify its use? doughendry@gmail.com

Hi, has anyone ever seen a wall mounted Swing Away jar opener. It folds flat against the wall or cabinet when not in use.

when i was 17 i left home my mother gave me some kitchen items one of them was a can opener it is a swing-a-way. Im now 71 and it still works great even sideways the safe way to open cans. the only problem is all the rust i can ,t find anything that will clean this up. it works like new still to this day. thank you

machines that last. This appears to be a good one. Rust...I've had good luck with Evapo-rust. Immerse in the liquid, take it out next morning, no rust!

I have a model 611, anyone know when they were manufactured?

Would baking soda and water work, like on a car battery?

My 1989 SwingAway gears are so rusted, it’s not cutting well.. I love my old one.. I bought a new Swing Away at Ace Hardware. I’ve bought and returned 3 others that don’t cut..Farberwear, Kitchenaid and one other..Fingers crossed. I did have a Kuhn Rikon top opener that I really liked but that broke after about 7-8 yrs. I don’t open many cans either. Wish me luck!!!

I have several of the Swing-A-Way wall can openers still In their original package would their be any value in them?