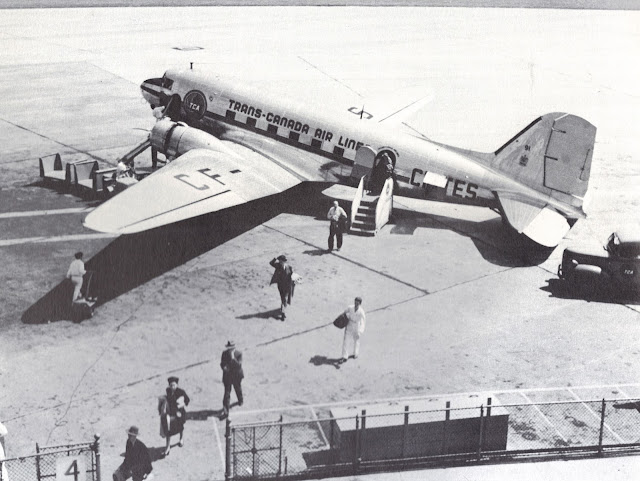 After WW2 the backbone of the Trans-Canada Airways was the 21 passenger DC3. They operated out of Winnipeg till 1961.
And from The Canadian Airline Pilot magazine -  July 1963.

At midnight April 12th 1963, Trans-Canada Air Lines Douglas DC-3 CF-TES fin 391 touched down at Winnipeg International Airport to herald the end of another chapter in the history of Canadian aviation.
For Captain Gerald Palmer, First Officer David Hennigar and Stewardess Jean McIver, it was not only the end of another circuit
over the Prairie Milk Run, but an end of an era born more than 17 years before.
It was the last DC-3 operation by Canada's national carrier.
One pilot was heard to remark that if he got paid by the number of landings rather than the number of flying hours in the DC-3, he would be rich. Altogether the 30 DC-3's flew more than 875,000 hours and no DC-3 was ever involved in a passenger fatality nor was any written off. They were retired honourably from TCA to
continue service with such organizations as DOT, Frontier Airlines,
Quebecair, Central Northern Airways, Matane Air Services, Gulf Aviation, Rimouski Airlines and TransAir.
CF-TES msn 11906 fin 391 was sold to TransAir April 13th 1963 too Lambair Ltd in June 1967, withdrawn from service 1970 and sent to the Western Canada Aviation Museum in Winnipeg where it is (was) preserved in its original Trans-Canada Air Lines livery.

Built as a Dakota for the RAF, then owned by the USAF, then sold to TCA.
CF-TES msn 11906 fin 391 was sold to TransAir April 13th 1963 then
Lambair Ltd in June 1967, withdrawn from service 1970 and sent to
the Western Canada Aviation Museum in Winnipeg where it is (was?)
preserved in its original Trans-Canada Air Lines livery.

I also found this. http://www.douglasdc3.com/friend/friend.htm scroll down an entry or two.

And this short comment from a defunct website, "the Museum also owns/owned another DC3 --CF-TES c/n 11906-- airframe, which is supposed to be stored in bad condition on a small airfield outside Winnipeg, but recent reports suggest it should go to Greenwood,N.S. for preservation."

Just to add to your story. Lambair Ltd. stripped the aircraft for parts - engines, port undercarriage, etc and left it abandoned on the north section of the YWG airfield. It was purchased as scrap for the huge sum of $75 and moved to his farm north of East Selkirk, Manitoba in 1970 when he was involved in the formation of the Western Canada Aviation Museum (WCAM). In late 1998 it was acquired by Paul Kroeker of Winnipeg in exchange for aircraft and parts needed by WCAM. In 2002 Mr Kroeker transferred ownership to the museum at 14 Wing in Greenwood, Nova Scotia. Greenwood asked me as the 17 Wing Heritage Officer to recover the aircraft and bring it to the military airfield in Winnipeg and store it until they could come and get it.

Thanks for filling in more of the story! Is it still waiting in Winnipeg?

No, much longer story to follow. "his farm" refers to Keith D Olson, one of the founding members of WCAM. It also turns out that CF-TES is the Spirit of Ostra Brama and was the personal aircraft of the Inspector General of the Polish free forces during the Second War. It left Winnipeg for Poland this past Saturday, March 9.