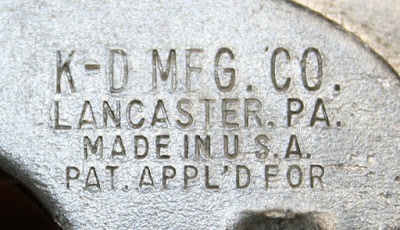 I like hacksaw frames since, for such a simple design, various manufacturers have been able to apply surprisingly different innovations.   This one, a "Convertible Saw Frame No. 99", is by the K-D Manufacturing Company of Lancaster, Pennsylvania. It accommodates different blade lengths by having notches in the top of the frame into which the top of a movable arm can lock.

Turning the knurled nut pushes the arm to the right, tightening up the saw blade in the frame.  Finally, by pulling the lever at the right of the arm up and over centre, the arm is locked securely in place.  It's an overly-complex design, but that adds to its appeal for me. 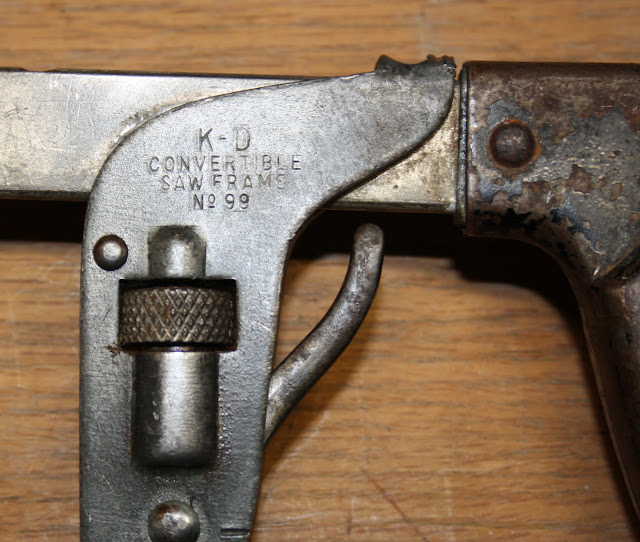 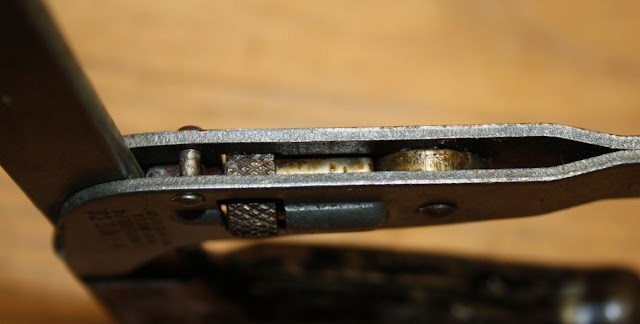 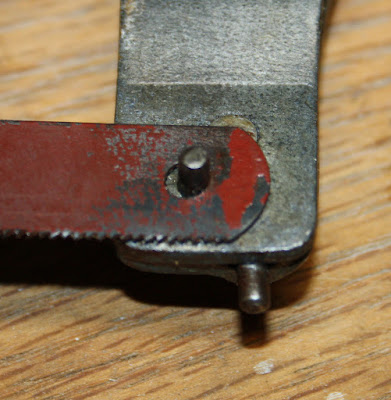 Below, an early "No. 72" ratcheting wrench from the firm:

Odd that it only has one socket end.

The company was eventually acquired by the Danaher Corporation which merged with Cooper Industries to form Apex Tools in 2010.  In 2014, Apex rolled K-D into the GearWrench brand, and the K-D brand has all but vanished since then.

Ah, the troika of doom strikes again: Danaher, Cooper, Apex. And another quality tool company goes down. I have a few K-D tools in my box, automotive stuff I don't use often but indispensable when needed. I didn't know the name was gone; an informative post, tks.

Many once revered American tool brands are now rolled up into faceless corporate rosters. Go to Toolguyd (http://toolguyd.com/tool-brands-corporate-affiliations/) for a well-researched list of who owns what.

The great inventor/machinist/ businessmen start and run successful companies only to be gobbled up by yet bigger companies. K-D was purchased by Easco then by a bigger fish yet. Manzel acquired K.R. Wilson, Snap On acquired Vacuum Grip, John Bean, Joseph Weidenhoff and the like the previous commenter, the list goes on. Visit www.fordtoolcollector.org to see some of the tools K-D has produced and sold over the years.

And it seems they all end up at Cooper Tool and Apex Tools. Thanks for the link to KD.

I have a tool iv never seen before it's made by K-D MFG.CO.LANDCASTER,PENNSYLVANIA I WISH SOMEONE COULD TELL ME ABOUT IT .

I just found a set of ratcheting wrenches made by K.D Mfg. CO. There are four ranging in sizes from 9/16"-1/2"-7/16"-3/8". Can anyone please let me know if It's been misplaced. I found them in my Family Farms' Attic. I have no idea how old they're, and I am guessing that they used to be my Great Grandfather's tools. I also found a brand new 1 3/8" machine tool die it's beautiful. If anyone is interested in these please let me know. jenkinsii.nick@gmail.com or n.jenkins5581@yahoo.com. Thank you