This is a new one for me:  "Picador Hex Key Rack No. 50", made in England. It's a die-cast holder for hex keys.  The "No. 50" sounds presumptuous. Below, as now attached to the side of my workbench. 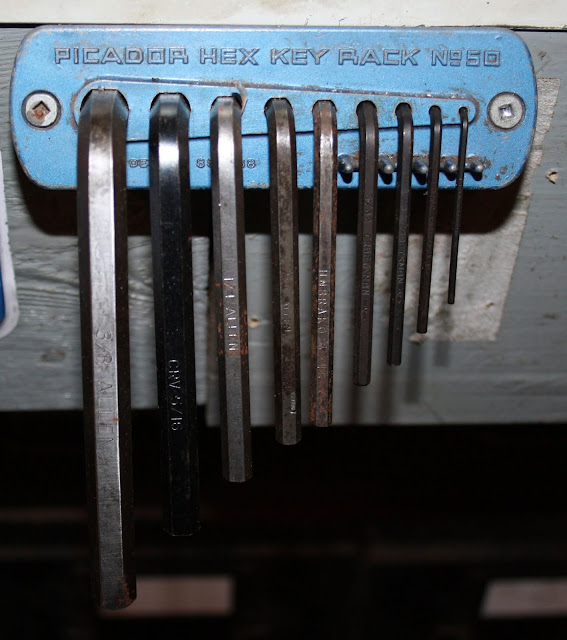 A picador, of course, is the horse-mounted guy who spears the bull in order to weaken it, so the matador can administer the coup de grâce.  Odd choice for the name of a tool company.

From what I can see online, most of the company's products were pot-metal tools (combination squares, table saw mitre gauges, linishers, drill sharpening jigs) and novelty tools (like my example), the most prestigious of which was the "Pup", an all-in-one miniature wood lathe and table saw intended for hobbyists.

According to information on lumberjocks.com, the company was founded in London in the 1920's, relocating to Birmingham in the 1940's or 50's. Apparently, at one point in time its sales rivaled Draper Tools, a British tool wholesaler that is still around, surprisingly.  Eventually, heavily in debt, Picador was bought by private interests and moved 120 miles northeast to Scunthorpe, Lincolnshire. (Scunthorpe is perhaps best known today for the "Scunthorpe problem" in which AOL's (and later Google's) profanity filter prevented residents from creating accounts because the town name contained a four letter sequence which, in isolation, referred to female genitalia.  I'm not making this up!)

Anyway, the person who posted the history on lumberjacks further explained:

To be honest, we bought the company whilst it was heavily in debt for £1, and, although we never made much of a profit we managed to bring the debt down. Unfortunately Chinese competition meant that we could not compete in a cutthroat market, and ultimately the company Picador went bankrupt. HOWEVER, that is not completely the end of the story. A lot of stock made its way to a garage in Grimsby England. where it probably still resides to this day. And the moulds are all in storage, awaiting the day when Britain becomes Great again. :-). If you google abcengineering.co.uk you will see a lot of Picador products for sale, and the proprietor, Andy Brooks, may just know a bit more than I do.

So, the company went under around 2008.  If you google abcengineering, that site has disappeared (although Picador-branded polishing spindles continue to be available from abcpolishing.co.uk/).  I guess it will be a bit longer before Britain becomes great again.

Picador shall rise again, if the current situation teaches us anything it is that our country should be self sufficient in manufacturing, imports Chinese or otherwise are short termism at it's worst...