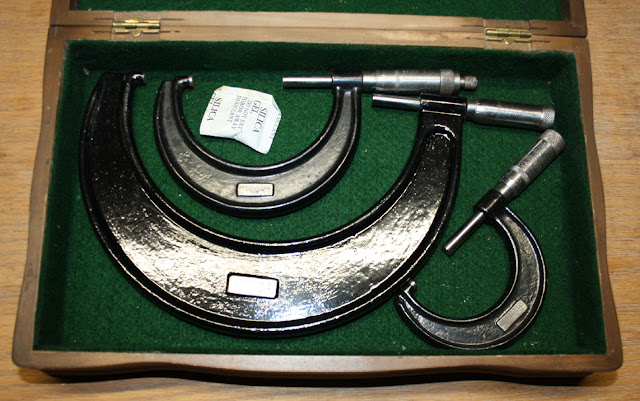 Above, my three Slocomb micrometers.

John Tibbets Slocomb established his company in Providence, Rhode Island in 1891.  He came to his work prepared, having been previously employed by Brown & Sharpe. The company's first micrometer came on the market in 1893, with the boast "the longest lived micrometer that can be bought."  In 1911,  the company ads described their micrometers as  "absolutely accurate and (are) the most durable tools of the kind made in the world" and listing Canadian agents as Wood, Vallanc & Co., Hamilton and Toronto;  Aikenhead Hardware Co., Toronto; and Foss and Fuller. Montreal.  In 1914, Slocomb sold his company to J.H. Drury, the sales manager of Union Twist Drill, who incorporated it as J.T. Slocomb & Co.  While its sales never caught up with its two major competitors, L.S. Starrett & Brown & Sharpe, the Slocomb firm stayed in the black until after the Second World War, when it's fortunes began to slide. It entered receivership in 1952 and was sold the following year to E. John Gregory, the owner of the Green Machine Company in Glastonbury, Connecticut..  The new owner moved the factory to South Glastonbury.   There, the firm was installed in an old building, the Hopewill Mill, with a long history dating back to the American Civil War.  At that point, it had been occupied by Hollister & Glazier, producing woolen uniforms for the both the Union and Confederate Armies.  In turn, it became the Glazier Manufacturing Company which stayed in business long enough to make upholstery for Ford cars.  Due to stricter environmental protection laws, the production of woolens had largely left the state by the 1950's when the Slocomb company arrived.  The company's new owners added the production of jet engine stators to the manufacture of precision measuring instruments, and the factory eventually grew to become an 85,000 square foot complex spread over 18 buildings.   Their biggest customers were Pratt & Whitney and the U.S. military.  Between 1984 and 1990, the company expanded to operations in Rhode Island, Waterbury and Wildwood, Florida. Thereafter, things began to unravel.  A downturn in the aircraft industry led to drastic decreases in revenues from the company's largest customer, Pratt & Whitney, which shrank to less than half in 1992. Military orders also dried up. In spite of that, spending at Slocomb continued unabated, including payment for a fleet of company cars, a house in Florida, and salaries for members of Gregory's family. In addition, the National Labor Board ordered the payment of $700,000 to 11 workers who had been illegally fired for trying to organize a union.  When the debt finally caught up with the company, they went unsuccessfully looking for outside buyers, including someone who planned to move the whole operation to China.  In 1993, carrying debts of $22 million against assets of $15 million, the company filed for bankruptcy protection.  The company president actually said, "Everyone had us dead 15 times over in the last 15 months."  The company was able to bounce back, emerging from Chapter 11 protection in October 1994.  According to an article in the Hartford Courant,  the company's amazing turnaround was due to a number of factors including:

"hard-fought deal-making, with full disclosure of the company's earlier mismanagement and excesses; deep, rapid cuts in spending; and, simply, that the company never stopped turning out good products."

Spending cuts included job losses, as the company's workforce dwindled from 430 in 1992 to 135.  In the end, it wasn't enough and the company went under in the late 1990's.  In 2006, the 21-acre property, collectively known as Cotton Hollow, was sold at auction to Killarney Farms, LLC.  In early 2008, the town of Glastonbury purchased the property and razed everything but the the original walls and smokestack from the 1836 woolen mill.  The plan is to make it into a park. 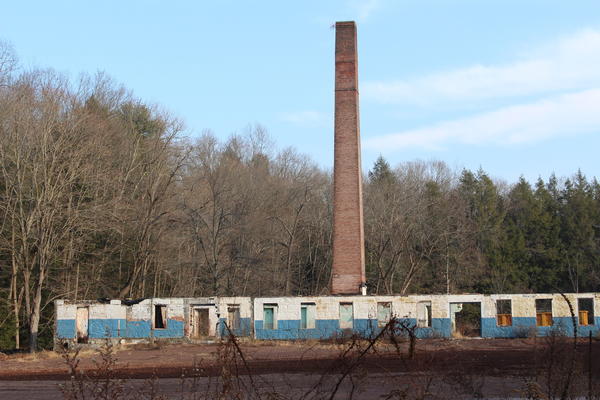 For some more history and images, visit Industrialglenn.  For a more nostalgic view of the loss of the factory, read Where Glastonbury's J.T. Slocum Factory Used to Be.  From the comments left on this blog post by former employees, it sounds like Slocomb was a good place to work, by and large.

As for Slocomb's competitors, Brown & Sharpe is now a division of the Swedish conglomerate, Hexagon AB.  Brown & Sharpe branded tools are now made in Switzerland. L.S. Starrett is still family-owned, but has moved much of its production to China, Brazil and elsewhere.

I found this page when researching the makers name on a set of center drills. They were supplied with a Drummond admiralty lathe sold by the war office disposal department London UK in 1919. They are still in the original container, some have damage to the tips but most are as good as new. A sad story and one of mismanagement too familiar here in the UK. It's no wonder the far east engineering firms grow day by day.

Thanks fro your comments and would you have pictures of the centerdrills I could post? Thanks!

I am a machinist who is near retirement..I came across an old JT Slocomb zero to one mike in my toolbox and looked up the history..Are there any young machinists out there who can run something other than CNC? Old hands on machine shop work!! I have loved it for more than forty years..

I worked for jt in Wildwood Florida. Wondering what happened to the forged ring manufacturing