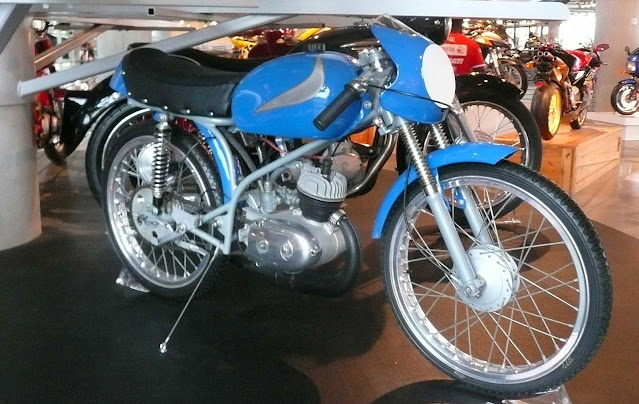 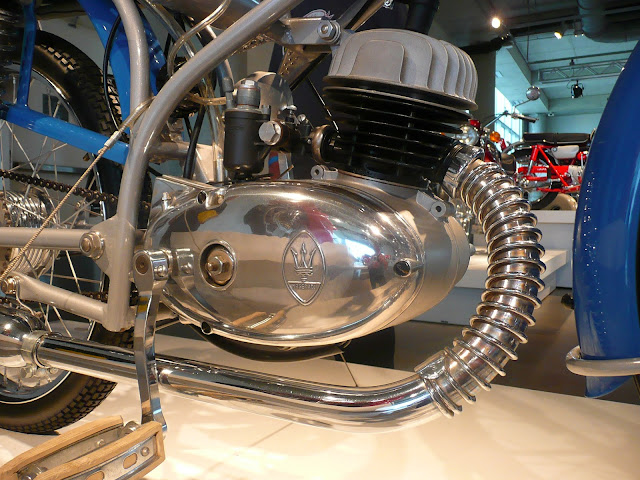 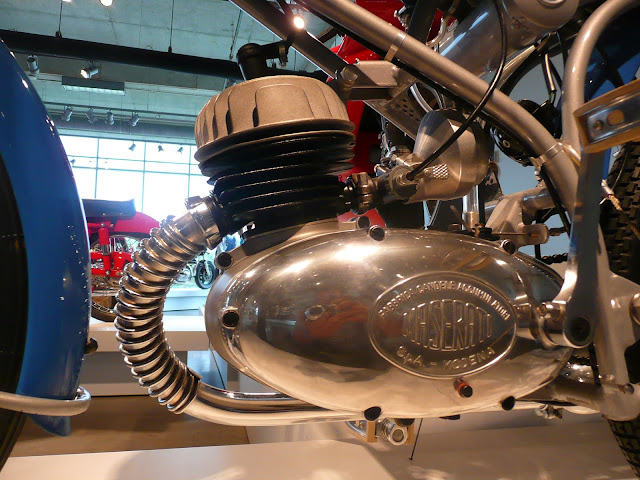 Maserati Motorcycles were in production from 1953 until 1960, a division of the Orsi Industrial Group which included the production of sparkplugs, batteries and other electrical items for the motor industry. Beyond that, the relationship to the car company and Trident logo until I found the following letter from an Orsi family member in an 80s Classic Motor Cycle magazine.

I read with interest your December issue, especially the answer in Helplines regarding Maserati motorcycles.

I will try to explain the real history of Maserati motorcycles and to clarify the differences between Officine Alfieri Maserati, manufacturer of racing and sports cars as well as milling machines, and the Fabbrica CandeIe AccumuIatori Maserati, manufacturer of spark plugs, batteries, and later of motorcycles, electric horns and farm milking-machines.
The history is complicated; therefore it is easy to confuse production of the two factories with the same trademark. I will start at the beginning:Adolfo Orsi (1888-1972), my grandfather, was a self-made man, who, starting out by collecting rags with a cart, became the most important industrialist in Modena. In the twenties and thirties he built the important Orsi Group, controlling a wide range of activities, like ironworks, foundries, iron-trade, agricultural machines (SAIMM), quarries, tramway, street-car and bus companies in Lombard and Sicily, and Fiat dealerships.
ln 1937 he bought from the Maserati brothers lhe Officine Alfieri Maserati and the Fabbrica Candele Maserati and transferred both activities to Modena in 1939, by agreement with the Maseratis, who gave their technical collaboration until 1947.
During the war the production of the Officine Alfieri Maserati was converted to small trucks and three wheelers with petrol and electric engines and to tooling machines.
In 1953 the Orsi Group (created by Adolfo with the help of his younger brothers and sisters) was split in different parts, among the members of the Orsi family. As a result, Adolfo Orsi and his son Omer Orsi (my father) controlled the Officine Alfieri Maserati,
racing and GT cars operation and another family branch controlled Fabbrica Candele Accumuatori Maserati with the concession to use the same trademark only for existing production of spark plugs and batteries. ln spite of this agreement, this branch of the family (sisters of my grandfather) made an agreement to develop and manufacture with ltalmoto, a small factory in Bologna, who was developing a new line of motorcycles, presented at the Milan Show in the winter of 1952. During 1953, the production plant was transferred to the Modena factory of Candele e Accumulatori to start making the160GT, using the Maserati trademark. Production of Maserati motorcycles continued with various models during the fifties, with a range from 48cc to 250cc.. The quality was good and on a par with other Italian products.
But the motorcycle side had no connection with the Maserati racing car factory which won the 1957 World Championship. The use of the trademark on two-wheelers was tolerated because of the existing relationship between the owners of each operation, and at the time it was public knowledge that the two
manufacturers were not connected.

For anyone interested in more detail, an extensive article about Maserati motorcycle production   appeared in the ltalian magazine Moto Tecnica in March 1989.
Adolpho Orsi,
Gargallo, ltaly
Gonversion
Posted by Mister G at 10:44 PM