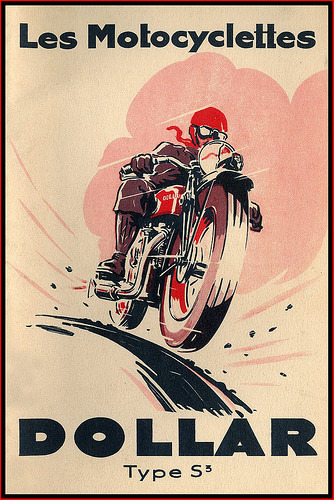 1930 Catalog cover for Dollar Motorcycles, France. The company had been started in 1850 as mechanical engineers, in 1890 they started manufacturing bicycles, this evolved into motorized bicycles after WW1 and when they were well received, production started on motorcycles using proprietary engines, the range included engine sizes from 100 to 500cc and eventually even a 750 narrow angle V four. The company was closed with the beginning of WW2.
Art by Geo. Ham, adopted name of automotive artist Georges Hamel. His career thrived during the interwar era, with his Art Deco styled work. After the war, his career slowed, mostly due to changing styles of advertising. More here.
Posted by Mister G at 1:43 AM

The four cylinders of the V4 engine were manufactured using a single piece of cast iron, something remarkable considering the casting techniques of the day. Unfortunately releasing such a complicated and expensive motorcycle when the Great Depression was in full force was not the best timing, and very few were sold.