Casey Jones: A Song of the Railroad Men 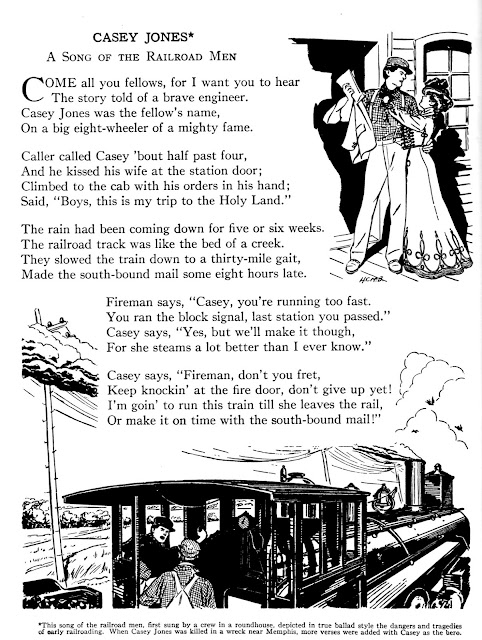 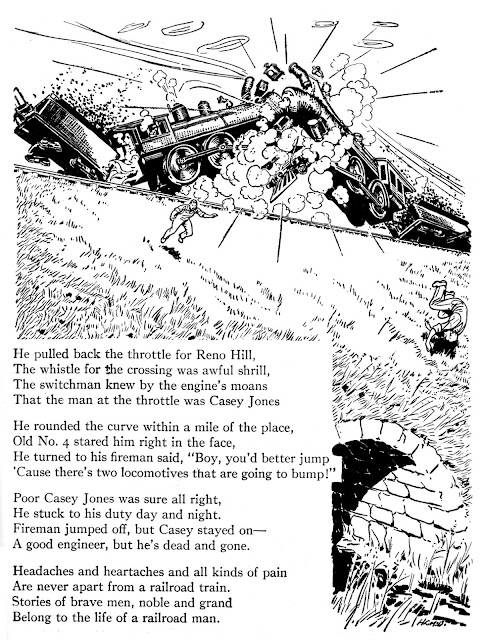 The famous train accident occurred on April 30, 1900.  In his book, Recollections of a Life Photographer (The Riverside Press, 1937, 1954) Wallace Kirkland  recounts how he was given an assignment by Life magazine to do a piece on the anniversary of the accident some 50 years later.  Kirkland was able to interview folks who had been involved, including the fireman.  In his piece, "The Real Story of Casey Jones," he discovered that Casey was asleep when his train hit the "torpedoes" put on the track to a mile to the north of the stopped train to signal him to stop.  Basically, he was exhausted from doing his regular run north to Memphis followed by this run for which he had volunteered.  His train was late and he was trying to make up for lost time.  The fireman heard the torpedoes, shouted to Casey about them, but he was still sound asleep so the fireman had no choice but to jump.  He wasn't told to do so by Casey.  Casey's train crashed full-speed into the rear of the other train, most of which was on a siding except for its caboose, a carload of shelled corn, and another car full of lumber.  These were the cars that were destroyed and which derailed Casey's train.  Kirkland also interviewed the man who found Casey's body, but his hand wasn't on the brake and steam hadn't killed him.  Instead, he had a splinter of wood through his brain.  As for the song, Casey's wife told Kirkland that an engine wiper named Wallace Saunders wrote verses about local railroad events, and he had written some lines about Casey Jones.  Some else later added some other lines, copyrighted it, and neither Saunders nor Mrs. Jones ever received any royalty payments from it.  She also said she hadn't been at the station to receive a final kiss from him, as the song has it.  So, not quite the Wikipedia version.


Kirkland was able to confirm the line about "the engine's moans" referring to Casey's whistle.  He recounts that engineers of that time were allowed to have their own personal whistles and competed with each other for the most interesting sounds.  Casey's was an organ whistle, consisting of seven brass pipes of different lengths from 4 inches to 9 inches.  Casey's oldest son hooked it up to a "live" engine in a railroad yard for Kirkland to hear, and it did indeed make a distinctive moaning sound that would have identified him to workers in the cotton fields of Tennessee through which his train passed.
Posted by The Duke at 8:53 AM