This story is taken from Dwight Boyer's excellent book, Great Stories of the Great Lakes (New York:  Dodd, Mead & Co., 1966).   Before automobiles and good highways, steamboat excursions on the Great Lakes were highly popular summer activities.  In 1900, Aaron A. Parker, the president of the White Star Line out of Detroit, told a newspaper reporter that he would bet $1000 that his new luxury excursion steamer, the Tashmoo, could trump either of the Cleveland and Buffalo Transit Company's passenger/freight steamers, the City of Erie or the City of Buffalo.  Given the rivalvry between the two firms, those were fighting words.  In Cleveland, Thomas F. Newman, the C&B's general manager, accepted the wager and nominated the City of Erie as his company's contestant in a race between Cleveland and Erie to start on June 4th.

The ships were not exactly well matched.  The author explains:

"Built only two years before the Tashmoo and in the same shipyard, the City of Erie was a strictly utilitarian vessel.  She had a 44-foot beam, drew over 10 feet of water, was 324 feet long and in addition to a cavernous freight hold, had accommodations for 600 overnight passengers.  Licensed to carry 2700 on excursions, she required a complement of 108 officers and crewmen.  The sleek Tashmoo was only 37-1/2 feet of beam, had a draft of slightly over 8 feet and displaced slightly over half the tonnage of her rival.  Strictly an excursion ship, she was unencumbered by freight holds and tons of ornate furniture that were featured in the City of Erie's many staterooms and lounges.  Extreme breadth, over the side paddle wheels, was 77 feet for the City of Erie, 69 for the Tashmoo.
'Statistically,' the reporter enlightened his readers, 'there is a great structural inequality, such as one might find in a contest between a sturdy, wide-bottomed skiff and a canoe!'"

Above, the City of Erie.  Below, the Tashmoo. 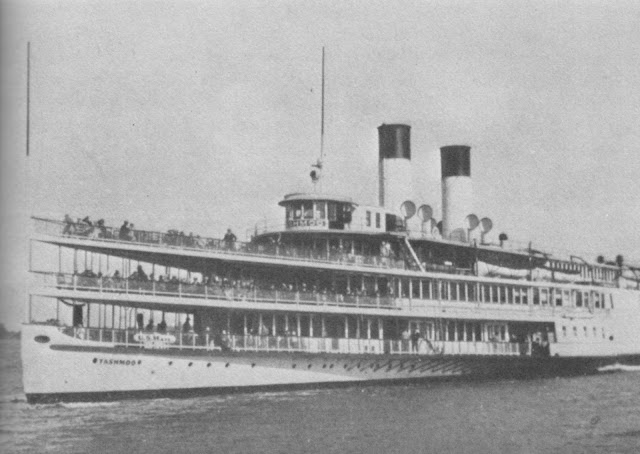 More than a million dollars was wagered in side-bets.  Both ships made some modifications to improve their chances, and the race was observed by as many as two hundred thousand people at the municipal pier and thousands more on local rooftops.  While neither ship officially carried any passengers, the cream of local society "signed on" as "auxiliary deckhands."  Aboard the City of Erie, her normal load of 88 tons of coal for a return trip had been hand-sorted to ensure only the best fuel.  The speed of the 30-1/2-foot paddle wheels was increased from its normal 24 turns per minute to 32.  At one point, one of the ship's steam intake valves began to release steam due to a faulty spring, and the chief engineer calculated it would take about 125 pounds of extra weight to correct this.  A small seaman was ordered to sit on top of the valve, with only cotton waste and occasional dousing of water keeping his behind from being cooked.  The Tashmoo had her own problems, not the least of which was overheating of the steam condenser and the drag caused by the fact that her engines and boilers had been placed too far aft, making her "squat" in the water at higher speed.  The ships traded positions at various points during the race but, in the end, it was the City of Erie that got the laurels.

Both ships were taken out of service in the late 1930's and eventually scrapped.

Great post. One of the few steamboat races that was actually a through-the-water contest with no tidal or current influences. The City of Erie beat the Tashmoo by only 45 seconds, running the 94.5 miles in 4 hours, 19 minutes and 9 seconds. At a 21.97 mph speed, that's movin' right along.