The most sued company in America 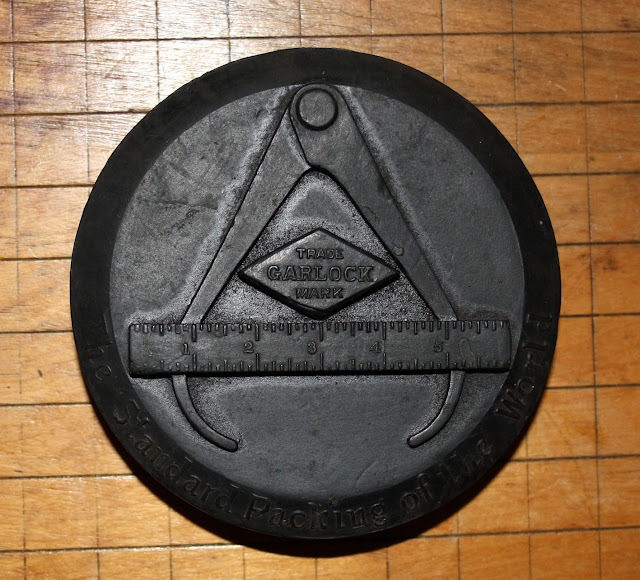 Above, a hard rubber paper weight from "The Garlock Packing Company, Manufacturers of Quality Controlled Mechanical Packings."  Around the outside, it reads, "The Standard Packing of the World."

Late in the 19th century, Olin J. Garlock came up with a better way to seal piston rods in industrial steam engines.  In 1887 he founded Garlock Sealing Technologies in Palmyra, New York.  (On January 19,1892, James T. Walker of Palmyra was issued a patent No. 467454 for a photographic camera. The camera was called the Takiv since the lens and shutter could be rotated to take 4 pictures on one plate. Although this camera has advantages over other plate cameras, Mr. Eastman had produced the first roll film Kodak camera in 1888 and Mr. Walker’s company could not survive the more efficient roll film model. Another of Palmyra's claims to fame is that 57 of the town's residents fought in the war of 1812).  Back to Garlock.  The company used asbestos in many of its products, which led to its putative title as the most sued company in American history.  It introduced the use of PTFE gaskets 40 years ago, and continues to this day as a manufacturer of fluid sealing products for a variety of industrial applications, including nuclear ones.
Posted by The Duke at 6:33 PM

I have one of those paper weights. Worked for the company in 1958-64 in Palmyra and then got promoted and transferred to Canada. I was involved in manufacturing.