The photos above show a Flattrack Nodwell.

Bruce Nodwell was a Saskatchewan-born inventor, contractor and entrepreneur who, in the 1950's, agreed to design a tracked vehicle for Imperial Oil to use to carry loads through muskeg.  Nodwell's solution involved a four-foot-wide track (basically a conveyor belt) running around rubber-tired wheels.  The company's big break came after they rented six transporters to the U.S. Army in Alaska, which was so impressed that orders were placed for 45 more.  These vehicles were huge:  40 feet long, 10 feet wide, weighing 25 tons plus a carrying capacity of 10 tons, yet able to cross musket at 12 mph while only exerting 2 psi of ground pressure!  The company eventually produced the Nodwell  110, which sold more than 1,500 units and is still in heavy use today.  As his firm became successful, others bought in and conflicts arose, so he left his company in 1965 to partner with his son Jack in forming Foremost Developments Ltd., a competitor  to his original company.  Another opportunity soon presented itself.  According to NorthernTracks:

"In 1966, a nine-person trade delegation from the Soviet Union led by an federal energy minister named Sashin came to Alberta, and realized that the novel "snow-swamp" vehicles was tailor-made for Siberia. When the Russians visited Foremost, Bruce Nodwell calmly asked the minister if he'd like to drive a 6T. His son was horrified, aware of the troubles experienced by other novice drivers. But Sashin maneuvered the tracked truck like a pro, thoroughly enjoying himself - he'd been a driver in the Red Army."

Over the next 35 years, the company sold the Russians 700 vehicles.  They were able to weather court challenges from Bruce Nodwell's previous firm, and to recover the trade name "Nodwell" when their rival folded in 1976. Over the next three decades, the company developed a range of specialized vehicles. Today, Foremost continues to offer the Nodwell 110.

Bruce Nodwell retired from his company in 1977, turning his attention to restoring old cars.  Although he never completed high school, he was made an honorary lifetime member of the Alberta professional engineering society.  He was also awarded the Order of Canada for his contributions to the development of the Canadian North.  His son Jack retired from the company in 2003.

In 1988, Canada Post released a stamp commemorating one of the Nodwell vehicles: 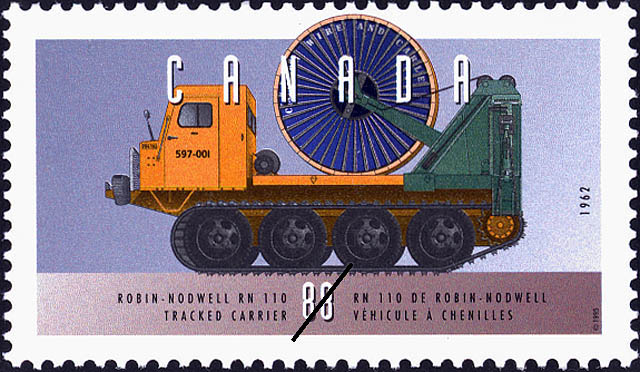 For more information visit the Historical Construction Equipment Association and the Unusual Off-Road Locomotion websites.
Posted by The Duke at 12:36 PM

Thanks for your comment! Nice to hear from people who were there. if you have any pictures or anything, related I'd be glad to add it to the post.