I found this image of a "David Maydole" hammer being offered for sale on Kijiji:

David Maydole was a blacksmith who in 1840 became a partner in a smithy in Norwich, New York, southeast of Syracuse. In that time, striking tools with wooden handles had a tendency to lose their metal heads as the wood shrank, hence the phrase, "flying off the handle."  Maydole came up with the "adze eye" as a solution and began making hammers of this type in 1845.  Its superior construction soon led to very successful sales.  Ever modest, Maydole explained, "I can't make a pretty good hammer, I make the best hammer that's made."  Business continued to prosper, even after a fire destroyed the factory in 1848.  It was quickly replaced a by a new two-storey building facing on the Chenango Canal which provided water power for the machines.  Ice-skates were added to the production line for a while.  When Maydole died in 1892, Maydole Hammer was the largest hammer concern in the country, employing 115 men.  The firm continued to be family owned and operated until 1931, when it became the Maydole Tool Company.  It was purchased by Mayhew Tools of Shelburne Falls, Massachusetts, becoming Mayhew-Maydole in 1939. (Founded in 1856, Mayhew Steel Products, Inc. bills itself as "the oldest punch and chisel manufacturer in the United States."  See Mister G's previous posting on their tape measures.) The war years were boom years, with a contract from the U.S. Navy for 100,000 hammers.  After the war, the demand for hammers tapered off, and the firm turned to making TV cabinets for a while.  However, another fire in 1957 ended the production of hammers.  The company attempted to re-open in 1961, but it was not to be.  In 1970, the 12 factory buildings were razed to the ground.

(Credit to Mark Simonson's 2002 article in The Daily Star for most of the above information.)

To view some early Maydole catalogues, visit the Trowel and Masonry Collector Resource. 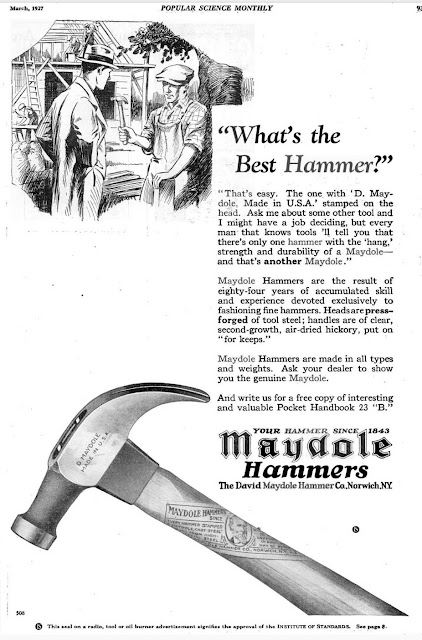