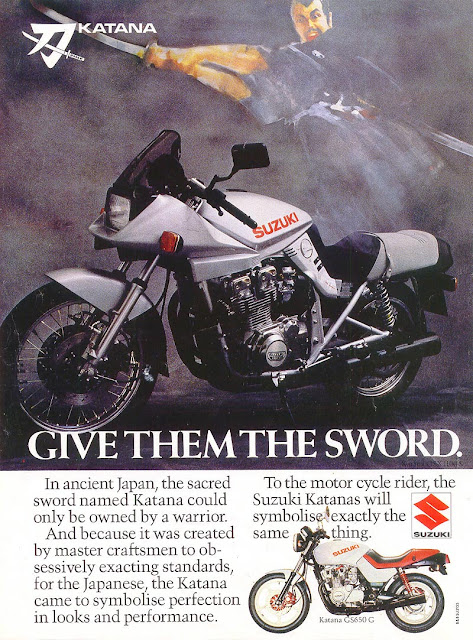 The Austalians got their own variant of the new 1982 Katana. The bike came with wire spoke wheels and an 18" on the rear vs the more common 17". The windshield appears smoked in this ad, which we also didn't see in North America.
Posted by Mister G at 10:53 PM

I'd love to know more about those wheels. For instance, what hubs are used - could they be the same hub as used on the GS1000, or were they a new model? During the same period, Kawasaki used several different wheels on their KZ1000, and in the last versions with spoked wheels, the CSR version, they used a new hub design. So too with Honda, the SOHC and DOHC CB750K each had their own version of those hubs, as did the Gl1000 - each subtly different yet with the same diameter of spoke flange. Suzuki was very progressive with their wire spoked wheels in that they were probably the first to market a superbike with a dual-disc front end. Kawasaki made them capable for it but didn't fit the second brake right away, while Honda only offered them as part of the CR750 kit, until the Gold-Wing came along in '75. Yamaha it would seem, didn't come up with very many rear wire spoked hubs with a disc brake. Some of the later TZ race bikes, the TZ250 or TZ 350 ... really not a huge selection of disc rear hubs in wire spokes, and some like the SOHC CB750F are expensive in any condition. My main interest is in doing wire-wheel rebuilds of the more modern bikes, CBR, ZX, GSXR etc. The Suzuki hubs seem to be the best construction, smaller and seemingly lighter than the Honda version. I'm also curious about the rims that were on these Katanas, as while the rest of the bikes saw a slight increase in tire sizes due to the heavy cast "mag" wheels they were fitted with, ostensibly so they could use tubeless tires - did they fit wider rims to these Australian Katanas or what?

And hey, in the photo it would APPEAR that the rear wheel IS a seventeen inch rim. It looks like a "deep-drop-center" rim too, which are usually three inches wide at the smallest. It would be pretty rare to see one in two and a half inch, and if that WERE a two and a half inch then proportionally the rim would be more like a fifteen or sixteen inch diameter. There's a good jump in sizes between the front rim and the rear, but I'd guess at the front being an eighteen inch diameter, maybe a 2.15" by the look of it, as the 1.85" by nineteen usually fitted on '70s era superbikes has a rather distinctive tall skinny appearance to it. But it could be a wider nineteen, like a 2.15 or even 2.50 inch. Anyway, upon close examination of the picture it APPEARS to be a 2.15"x18" front rim with a 3.50 or 110/90x18 tire and a 3.00"x17" rear rim with a tire of 4.50" or 5", 120/90x17 or 130/80x17 spec. At least, that's MY impression. I've seen other Australian Katanas - I love 'em that's why I googled the subject - and I haven't actually seen one with wheels like the ones in the photo. Usually, these days they're customized with different rims - this is the real advantage to wire spoked rims, but yeah this photo seems a bit different than what I've seen elsewhere. Maybe I'm mistaken and it's just the way the bike is fore-shortened by the angle of the photo, but yeah that's how it looks. Compare it to similar photos of the North American Katanas, or to other bikes with the same size of rims I've listed. But perhaps it's an early prototype or pre-production model, as seen with early Honda CB750K promotional literature, or a Japanese home market bike?

Either way, what a difference the wheels make. I had always thought of the Katana as a butt-fugly model, but then I was won over when I discovered the Australian version. Gorgeous bike. It's funny how through-out the Katana line-up the performance specs actually went DOWN from the earlier GS line-up, but there were some aspects fo the styling that weren't completely horrible. Ha ha. I just can't give it a complete endorsement. I mean, heck take a look at the GS1000 track bikes, the Wes Cooley replicas, etc. Not to mention the two-stroke triples. Good looking bikes. It wasn't so much that the Katana was the butt-fugliest bike ever, it was that it had superceded such lovely bikes, blotting out the earlier classic styling. It's the same thing with my DOHC Honda in the drive-way right here - they're nice enough bikes in their own right, but they're seen as responsible for the bloated old SOHC model being dragged away and shot. As though the CB750K of 1978 bore much resemblance to the Sand-Cast '69 bike. So much better could have been done with 'em, but they're lovely enough bikes in their own right. The Katana's in much the same boat, except here you've got a top of the line sporting model that's still spinning wire wheels. It's a tip of the hat to the classics, not to mention it's probably a performance advantage and an upgradeable feature at the same time. I sure think it is, and that's why I've retro-fitted wire wheels to my '82 CB750F.

Everybody else is fitting the three spoked seventeens to their superbikes these days, and I suppose it's an arguable up-grade from the old cast mags of the period. But they're still as heavy as a pair of boat anchors. So expensive and complicated though it may be to carry through to the same tire specs as the three spoke rims can offer you, it's a much lighter option and thereby the performance advantage goes with the wire wheels. I think more and more people are gonna catch onto that, and maybe one day we'll see 'em back in the GP circuit some day soon. When the materials change a little bit, which is to say - when the carbon-fibre construction methods move ahead another quantum leap or two. But yeah, all of those folks pulling the wire rims off their old super-bikes, going to the three-spokes? Send the old used wheel hubs MY way.