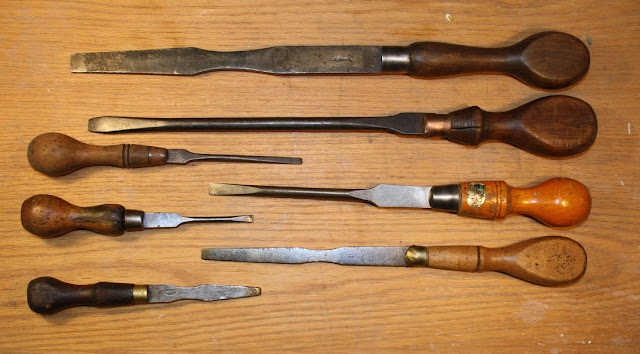 Above, my small collection of cabinet and "London pattern" screwdrivers or "turnscrews" as the British used to call them. Most have no maker's mark, but the collection includes examples made by  W.H. Clay Ltd. and  Marples & Sons (both Sheffield tool manufacturers) and J. Bungersohn  of Barmen, wherever that is.

As can be seen from the picture of a broken screwdriver below, the blade is attached through a tang driven into the handle, and is further held in place by having the bottom of the blade secured in a slot in the handle:

The screwdriver is a relatively recent hand tool, not becoming common until the early 1800's when the technology to manufacture screws advanced.  According to Walter Coventon in his  Woodwork Tools and Their Use (London:  Hutchinson's Scientific and Technical Publications, 1953, see below), London screwdrivers were lower-priced tools compared to the cabinet maker's ones.  These are distinguished by flat-sided handles and sometimes scalloped blades which, according to Peter Welsh in his book Woodworking Tools, 1600-1900, served only a decorative function
. 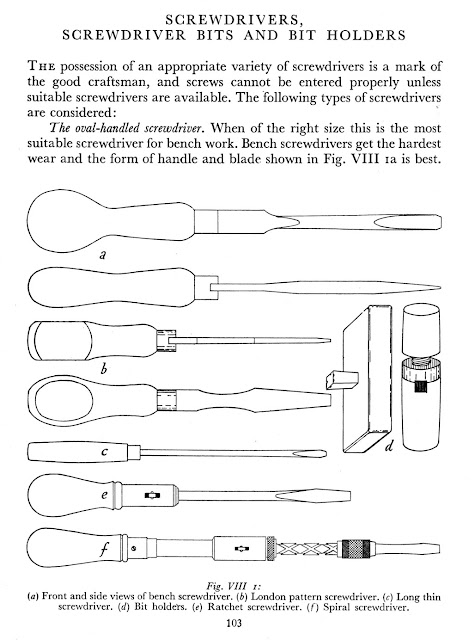 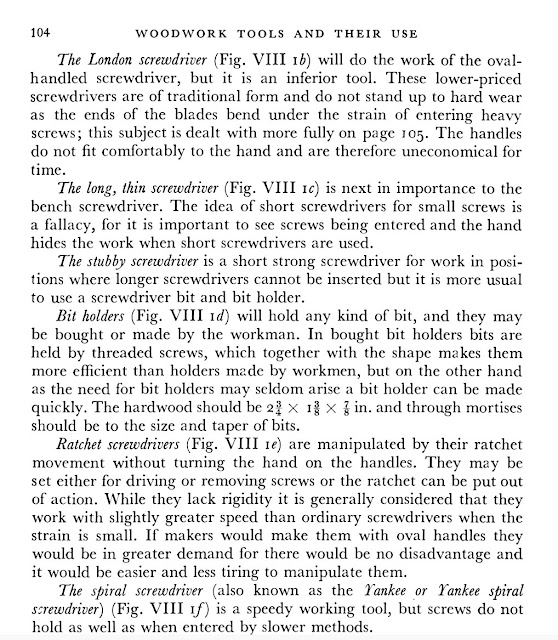 In England, they were also referred to as "flat screwdrivers" and "spindle screwdrivers."  Don't ask me why.  Back then, they also knew the difference between Warrington hammers and Exeter hammers.

J Bungersohn was a German toolmaker, who set up his business in Barmen (now part of the modern city of Wuppertal). The company is now known as Barmer Export GmbH (BEG). As well as screwdrivers, Bungersohn made other small hand-held tools such as corkscrews, as well as machetes.