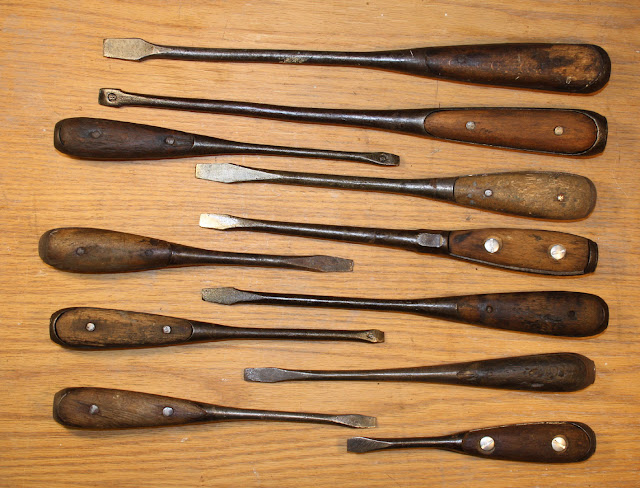 These old types of screwdrivers turn up very infrequently in my neck of the woods where they're commonly referred to as "mechanics' screwdrivers."  Only two of the examples above have any identifying marks.  One says "Irwin" and another "Steel Warranted Germany."  Several have numbers cast into the blade at the end, perhaps to signify length, or perhaps because at one time some manufacturers had their own blade width classification system.

As late as the mid-Thirties, you could still find drawings of this type of screwdriver in woodworking texts:

Because of their heavy construction, users could hammer on the handle end with impunity (to the tool, not necessarily to the workpiece).

The design for this form of screwdriver was first patented in the U.S. in 1903 by William S. Ward.  Apparently, they're commonly referred to as "Perfect Handle" screwdrivers because this is the name under which they were sold by the American manufacturer to which Ward assigned his patent:  H.D. Smith & Co. of Plantsville, Connecticut.  According to information on the Lee Valley Tools site, the H.D. Smith company was founded in 1855 to manufacture carriage hardware.  By 1910, they had turned to the production of high-quality forgings and tools, eventually turning out  cold chisels, a barbed-wire cutter, a hatchet, farriers' nippers, drawknives, screwdrivers, hammers, pliers, pipe wrenches, pry bars, a tack puller, tire-changing tools, wrenches, and valve spring lifters.

"A feature of many of their tools was the "Perfect Handle" where the tool, forged from a single billet of steel, had a wooden handle riveted on. They drew on the scientific explanation of relative heat conductivity of materials, by Prof. Lawrence Hodges, to say that these tools would be comfortable "in the hottest of heat and the coldest of cold." 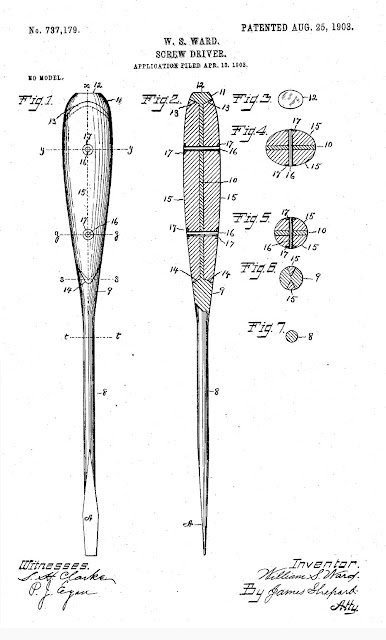 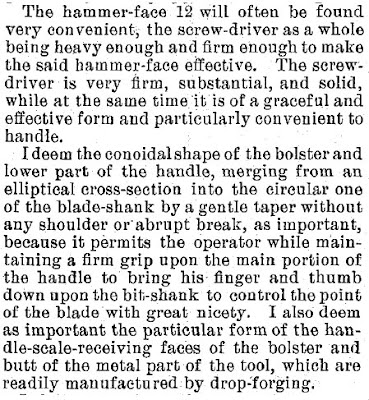 H.D. Smith also produced tools under several other trade names.  My favourite is the one they used for their slip-joint pliers:  "Gittatit."  Unfortunately, they were unable to weather the economic depression and were acquired in 1930 by the Trimont Manufacturing Company, which discontinued the screwdrivers.  The screwdrivers were, of course, widely imitated by other manufacturers, which explains the Irwin and German-made ones in my collection.

For tips on how to restore such screwdrivers, see Perfect Handle Tool Repair.

I have a 9" screwdriver with
"H.D.S. & Co. Patented
PerfectHandle
....Conn. U.S.A."
printed in a "ribbon" around the metal shaft. Butt end is flat, or has been hammered in use, wood looks like dark oak. None of the similar pieces on the web show this ribbon label. Do I have something previous to 1930? Thank you for your time. ~ Steve

Sorry, I'm not an expert on old tools, so I can't help you date your screwdriver. However, if you care to send some photos, I'd be happy to ad them to the post! Thanks for visiting.

Pleasant post, great. It's very not quite the same as different posts. We 1 Click Smt is the business chief in structuring and assembling robotized Screw driving System for get together applications in mechanical markets. Visit our site if that you are searching for different alternatives.