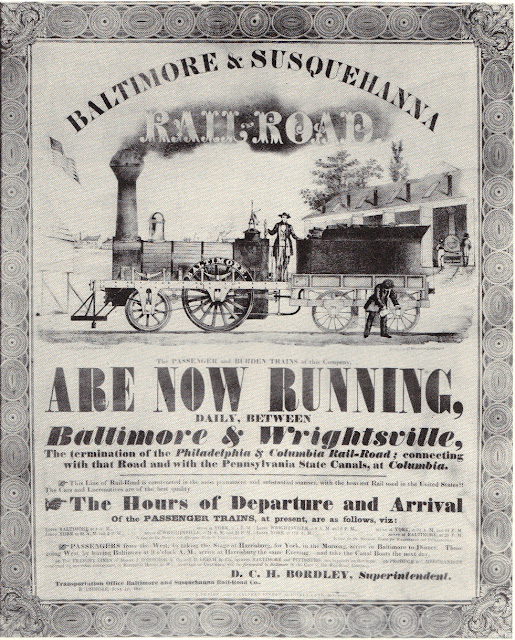 The Baltimore and Susquehanna Railway was chartered in 1828, started operation in 1932 when it imported it's first locomotive, the Herald -an 0-4-0 Sampson class locomotive from Stephenson in England. The poster above shows the locomotive Baltimore which was built by The Locks and Canals machine shop of Lowell Massachusetts. It started out as a copy of the Stephenson engine, but later modified by the railway shops to a 2-2-0 configuration.

As was common in those days the company ran afoul of local interests as they attempted to extend the line into Pennsylvania but by the late 1830s the line extended to York Pennsylvania.
In 1854, after a financial crisis proved devastating the railway was merged with several other railways to become the Northern Central Railway which was in turn swallowed up by The Pennsylvania Railroad.
Info from the Baltimore and Susquehanna Annual Report 1832 and 1854, also the United States National Museum Bulletin 252. Smithsonian Press 1967
Posted by Mister G at 10:11 PM