We used to make things in this country. #44: J. Eveleigh & Co., Montréal, Québec

A lovely old steamer trunk I picked up: 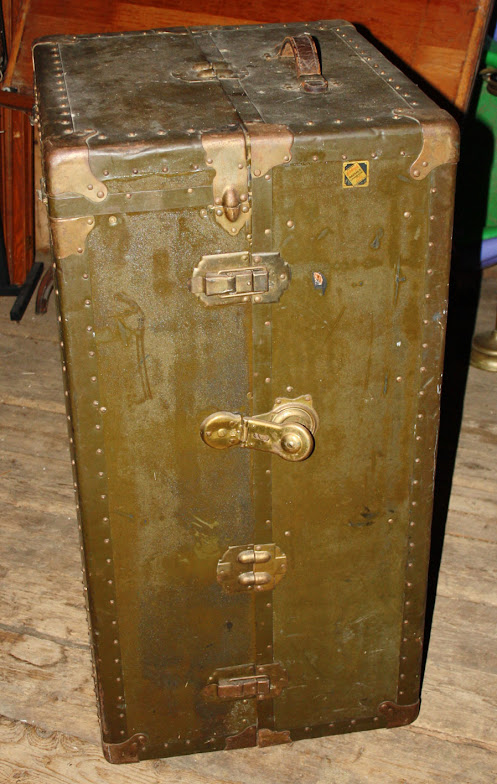 It opens up to reveal drawers and a closet section: 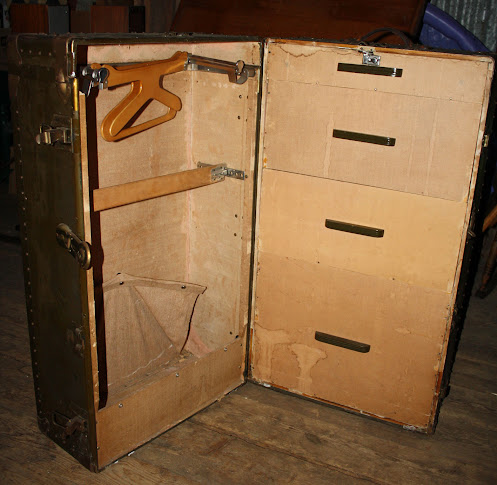 The top of the left-hand section folds back, and the rails for the clothes-hangers telescope outwards: 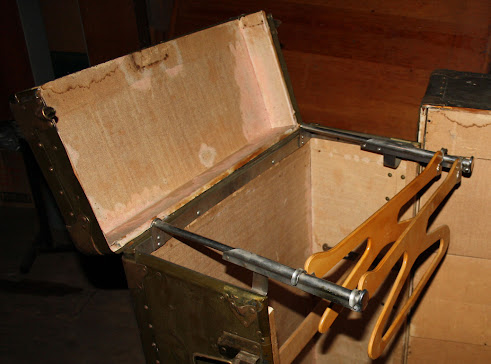 In the 1953 Ashdown's hardware catalogue, it is referred to as a "taxi wardrobe trunk": 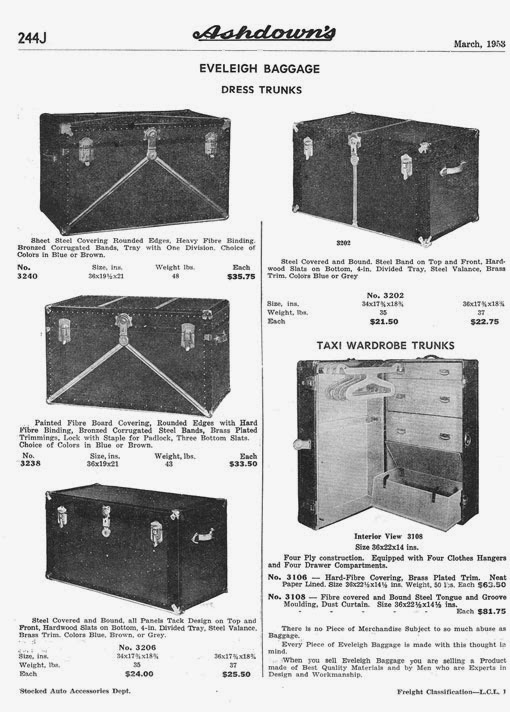 There is very little information available about this company.  It seems that one John Eveleigh was born in Hereford, England in 1765, moving to Ireland where all of his children were born before emigrating to Montreal, Quebec.  One of his descendants, Joseph, remained in this city and founded the luggage company in 1870.  In the days of lengthy travel by steamship and rail, there was obviously a huge demand for traveler's trunks. The one pictured above was clearly designed as a traveling wardrobe.  As the automobile and then the aircraft gained ascendancy as a mode of travel, luggage needs changed and perhaps Eveleigh did not adapt to this.  The company was bought out in 1957 by the J.E. Lortie Company, also of Montreal, which had begun in 1892 as a saddlery business, eventually turning to the manufacture of leather pole-climbing belts and straps needed by workers erecting the rapidly expanding electricity and telegraph lines.  The Lortie company went on to manufacture canvas goods such as dunnage bags and army webbing during World War II, to which they added the Eveleigh product line when they acquired that company.  Today, Lortie is known as Jelco, and specializes in fall-protection equipment.

He was succeeded by his son, Frederick Eveleigh, who was president of the company until it was sold. Another family member F. Reeve Eveleigh was vice president at the time.
Posted by The Duke at 9:46 AM

I have one that looks identical to the one in the photo from the same company. Also has a mall ironing board inside. Belonged to my step-grandmother who travelled when she was young. She lived I Montreal. Thank you for the historical info on the company.

I have a fine old Eveleigh suitcase in black heavy leather with straps and steel fittings, probably from the 1930's, in excellent condition, a great conversation piece. It's provenance is from the Melchers of old Montreal.

Came across your page researching Joseph Eveleigh. My research seems to indicate that J. Eveleigh & Co. was the successor company to an E. Perry & Co, which won a prize of some sort at the Paris Exhibition of 1867. Thanks for the photos of your lovely trunk and the period advertising!

hi i recently found one as well. it has all the hangers and drawers,so happy! mine has a rounded top. any way of finding the resale value of these trunks?

Why do so many people have to ask us to tell them what an item is worth? Isn't it enough that this stuff is so cool? Anyway, we've given you some history for free. We don't provide valuations.

My great great grandfather James Guest was the plant manager for Eveleigh in Montreal. There is a letter from his son to the president of the company in 1941 the month he died thanking the president for allowing my great great grandfather to maintain his access to the factory and allow him to come a go at will until his death. It obviously gave him a sense of purpose during his final retired years. I read the letter, but unfortunately it was lost in the closing of my grandfathers estate.

What would it be worth now a days in good condition?

In my experience, only a few dollars. Disappointing.

Thank you for the history lesson.

Whats it worth?? I found 2 suitcases from the 30's in a dumpster, some of us need money..whats it worth..sure its cool. They dont fit my style, so i'll sell em for whatever, upgrade my shopping cart.

I am married to and mother of the last line of Eveleigh's from Montreal. Thanks for the interesting history lesson on our family! I only know the bare minimum about the company that I can glean from my father-in-law. He is very proud to come from a family that produced such amazing pieces for travel a century ago. So cool!

Thanks for your comment! If you can add anything to the history, it would be much appreciated. =

My grandmother is an Eveleigh. She moved to Michigan in the 50's. Her grandfather founded the company and her father took over the business. I would love to connect with you!

FYI, I indentified the location of J. Eveleigh & Co, the luggage/trunk manufacturer from Montreal, Quebec, Canada. They used to have their manufacturing plant on Du College Street in Saint Henri neighborhood. The precise address is 999 999 Rue du Collège, Montréal, QC H4C 2S2

I just read this to my father whose family owned the business until it sold. He spent a lot of time there when he was growing up. He said the number is 939 (unless the numbers have been changed!)

I've re-sent an email to you (jlbarkley if it went to spam) with a photo and
brief info about the company (I also commented above and below regarding the address).

I've added a picture of the founder, provided by the great, great, granddaughter, sounds like family connections can be made here! If you have pictures or connections to add, you can send an email to
Gerald@vanwyngaarden.ca