We used to make things in this country. #45. Burlington Canning Co.

In the days when cans were made by hand, a good can-maker could turn out three or four hundred cans per day.  In the early 1900's, automatic can-making machinery boosted output into the millions.  The Burlington Canning Company canned local fruit but especially tomatoes, whose smell pervaded the town during the periods when they were being processed.  One worker remembered:

"There was never any need to ask in Burlington if they were making ketchup.  One bottle is refreshing, but the hundreds of tons being processed, steamed, skinned and the huge piles of waste--well, we sometimes wondered why we like ketchup."

Burlington Canners was eventually absorbed into the Alymer brand, which was originally part of the Del Monte empire but since 2007 has been owned by Baxters Canada Inc. out of Quebec.  The Canadian Canners plant was razed for development in the mid-Sixties.  A rival factory, Tip Top Canners, burned to the ground during the same period, along with the Burlington Box, Barrel and Basket Works which had made fruit containers since 1893. 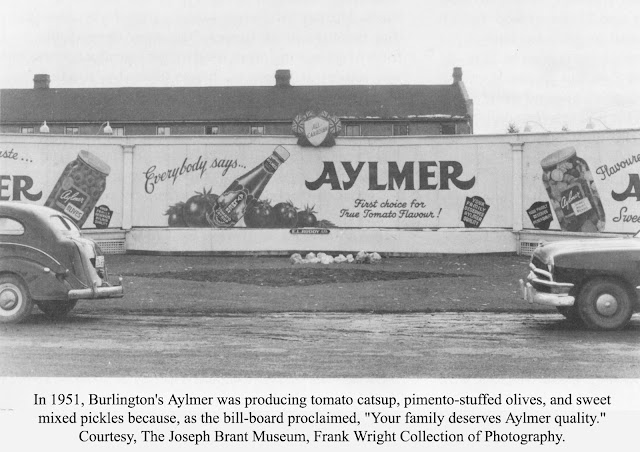