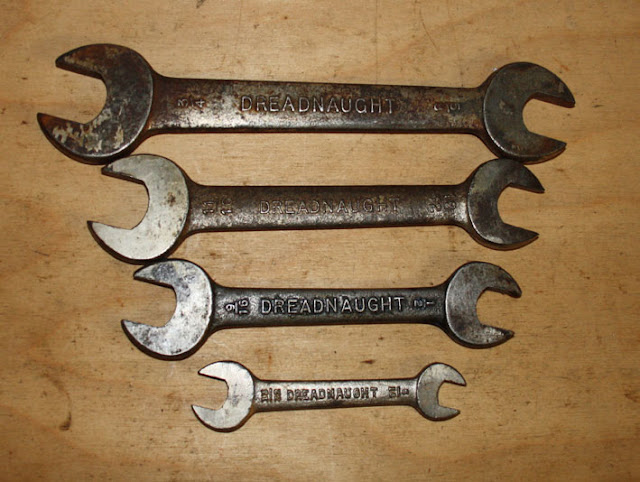 On the reverse side, they are stamped "Molybedenum." 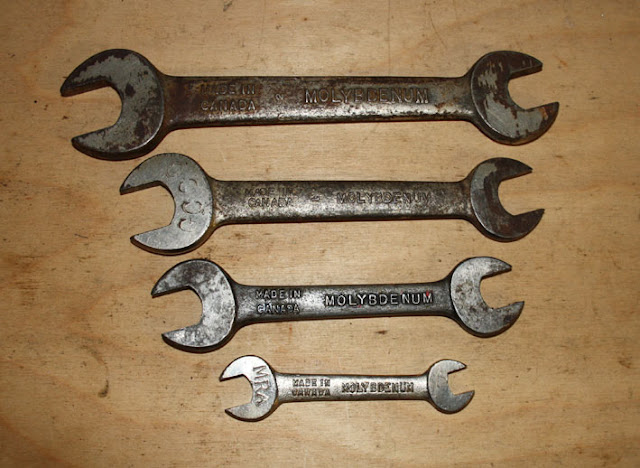 Toolmakers like to give their products name which suggest strength and durability.  In 1906, the Royal Navy introduced an entirely new design of battleship called the “Dreadnought” (i.e., "fear nothing") fitted with steam turbines, making it the fastest and most powerful warship afloat.


Not surprisingly, someone thought to apply the name to a wrench.  (Similarly, Ausco used the name "Drednaut" on some of their jacks, and Slazenger marketed a "Dreadnought" riding suit.)   The use of molybdenum in tool steels came to the fore in the 1930's, when the proper heat ranges for forging and heat-treating this alloy were determined.  So, these tools are likely from this period or later.

The maker remained a mystery to me until one day I happened to find a Dreadnaught adjustable wrench: 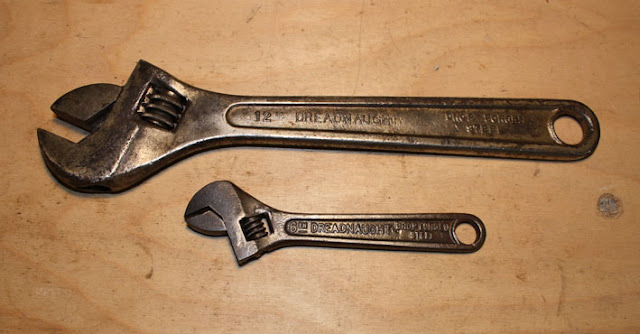 On the reverse side, the answer!

Here's a smaller 6-inch one:

So, “Dreadnaught” was actually a brand of the Gray Tool Co. of Toronto.  This firm was founded in Toronto, Ontario in 1912 by Alex Gray as the Gray Ball Bearing Co. Ltd.  It continues to be a family-owned firm and one of the few all-Canadian tool companies left.  (However, see additional information in a visitor's comment below.)

Below, an early ratchet and early box-end wrenches made by the company: 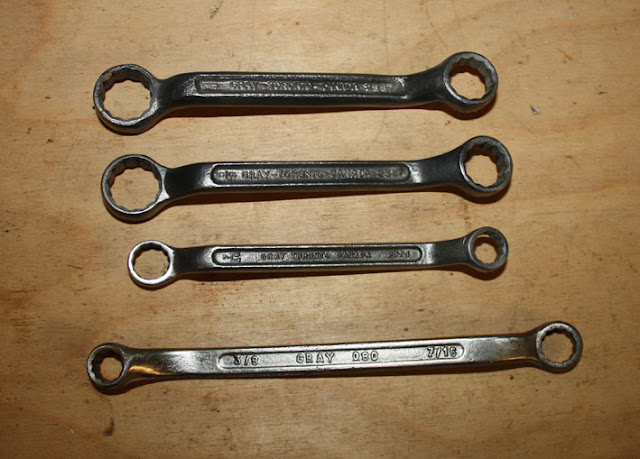 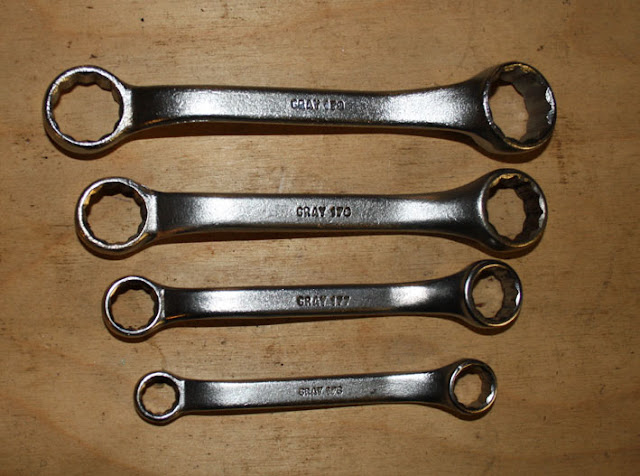 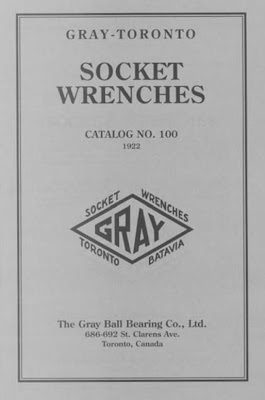 Below, an old ratchet stamped Gray F&S Ltd.  (Thanks to the visitor's comment below I have learned that F&S stands for "Forgings and Stampings.")

In 1930, Gray undertook a joint venture with the Bonney Forge & Tool Works of Allentown, Pennsylvania, a partnership which lasted until 1961.  (After being in business since 1877, the Bonney name disappeared from the market in 1995).  The Dreadnaught brand was also applied to Gray-Bonney adjustable wrenches, as in the 1949 Garage Supply Company catalogue below: 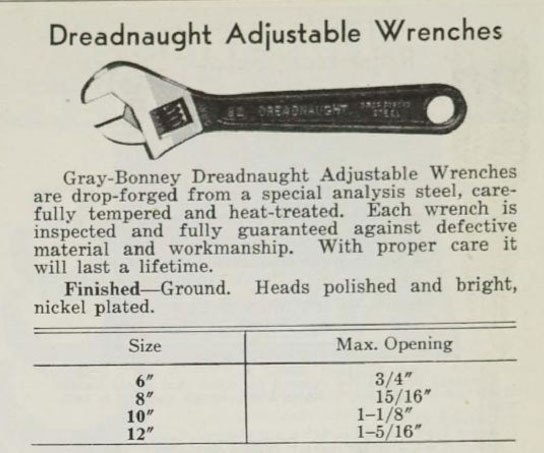 For more on the company, see my earlier post:  How hard can it be to make a wrench?  Gray Tools.

Postscript:  About a year ago, I sent an email to Gray Tools asking if they might be able to tell me roughly the years during which they produced wrenches under the Dreadnaught brand name.  All I got back was an email promoting one of their tool sales.  I was forced to conclude that the company was obviously not too interested in celebrating its own history.

Ironically, last year was their centenary and I was clearly now on their email list.  Their big promotion was a colletors' set that included (wait for it!) a "thank you" card signed by Alex Gray.  Certain to become a treasured family keepsake!   Be still, my beating heart!   Anyway, I passed. 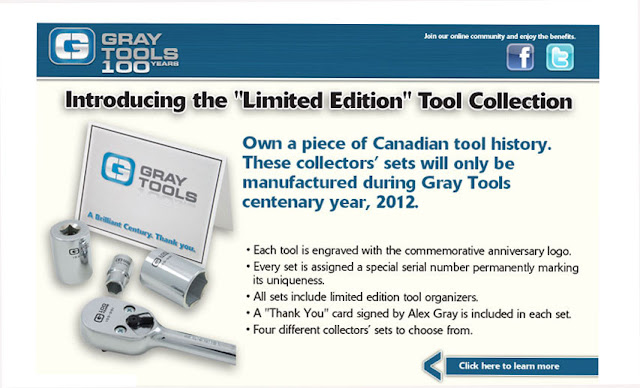 Interestingly, the name Dreadnought continued until recently on a British submarine.  She was decomissioned in 1980.

I still have a few Gray tools from my father's toolbox. He would have purchased them in the 40's, 50's or early 60's before he switched over to Snap-On.

Sadly, Gray Tools are no longer family-owned. Alex's children had no interest is continuing to actively run the venerable Canadian company, so he sold it to two senior managers. Happily, ownership remains Canadian and production will continue here!

I was just given some Dreadnaught wrenches and a web search led me here. Thanks for the history. Since I see alot of motorcycle stuff on your blog: one of my Dreadnaught open-end wrenches is a size I'd never seen: 0BA & 1BA. I assumed British sizing and found this online:
B.A. sizes are commonly found on British cars and motorcycles.
On motorcycles, you may find them on SU, Amal or Lucas products as well as electrical components, handlebars, tank badges.
I learned something new today!

Here's more than you probably wanted to know. In 1876, the Socièté des Arts de Genève convened a committee to standardize small threads for instruments and clocks which, under Professor Thury proposed a standard 47-1/2 degree thread angle, with rounded thread crests and roots. The steeper thread angle was chosen to impart greater strength to these small fasteners. The British Association (BA) or British Association Standard (BAS) thread developed from this Thury thread in 1884 and was standardized in 1903. Given its Swiss provenance, it is the only British thread form based on metric measurement, as the pitches are calculated by raising the arbitrary base 0.9 mm to the power of the corresponding BA number: e.g., the pitch of 1 BA is 0.9, 2 BA is .9 squared, or .81, and so on. Depth of thread is 0.6 times pitch. The series ranges in reverse sequence from 0BA (with a diameter of .2362 inches) to 25BA (.0098 inches). On motorcycles, it is found most often on electrical components.

Just picked up a set of Dreadnaught tools from a local auction house and had no idea if they were an independent Co. or not!~ It was great finding this page and a picture of the exact set that I have with the info!
Awesome guys
Thanks
Cal Nova Scotia

Thanks for this bit of history. My first set of Whitworth wrenches was a WWII surplus set of Gray Dreadnaughts. They do the job but are a bit short. I have come up with a few more Dreadnaught wrenches, both Whitworth and SAE, when going through the bins of old wrenches at pawn shops. A nice bit of Canadiana!

I also have a set of dreadnaudht. I tried to find out about them, but got no respnse from Grey. Also have s few dreadnaught with Gray on them too. Great info