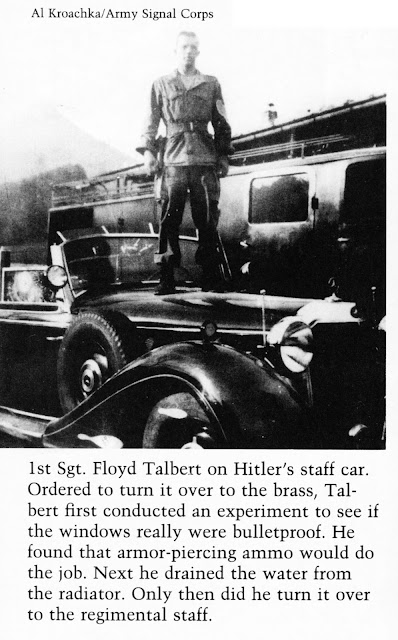 Taken from Stephen E. Ambrose,  Band of Brothers.    (1992) Touchstone (Simon & Schuster), 2001.  This fascinating and well-written book documents the experiences of E Company, 506th Regiment, 101st Airborne during their time in combat from Normandy to Germany and eventually Hitler’s Eagle’s Nest.  The book is the basis for the excellent 2001 TV mini-series.

Ambrose relates how the soldiers of the 101st who captured the Eagle's Nest responded when ordered to hand over their hard-won war trophies to the brass hats who arrived later:

"Carson asked Howell if he thought those windows really were bulletproof.  Howell wondered too.  So they paced off ten yards from the left rear window, aimed their M-1s and fired.  The window shattered into a thousand pieces.  They gathered up the broken glass and walked away just as a captain from regiment came to pick up the car.

Before Talbert turned over his Mercedes, he too did some experimenting.  He was able to report to Winters that the windows were bulletproof, but that if you used armor-piercing ammo, it would get the job done.  Winters thanked him for his research, agreeing that one never knew when this kind of information would come in handy.

The men tried another experiment.  They drained the water from the radiator of the Mercedes, to see if it could run without it.  With a third luxury car, they decided that before turning it in they would see if could survive a 30-meter crash, so they pushed it over a cliff.

So the brass got luxury automobiles without windows or water, or wrecks (Talbert's Mercedes burned out the engine trying to climb the road to the Eagle's Nest).  The men ended up with trucks, motorcycles, Volkswagens, scout cars, and the like, which were good enough, and anyway the fuel came as free as the vehicles."


Mister G has brought to my attention the fact that this very same car was acquired by the Canadian War Museum in Ottawa, where it is on permanent display: 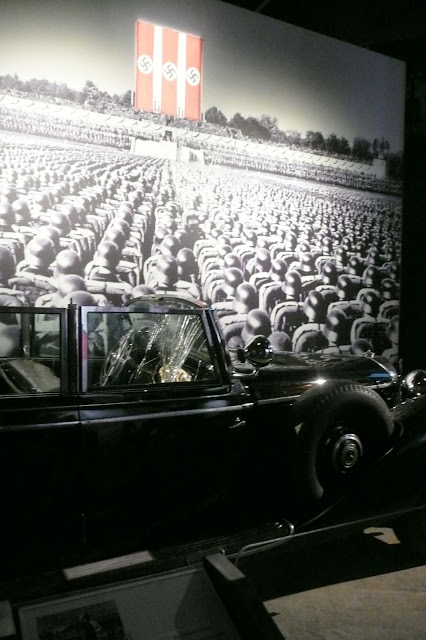