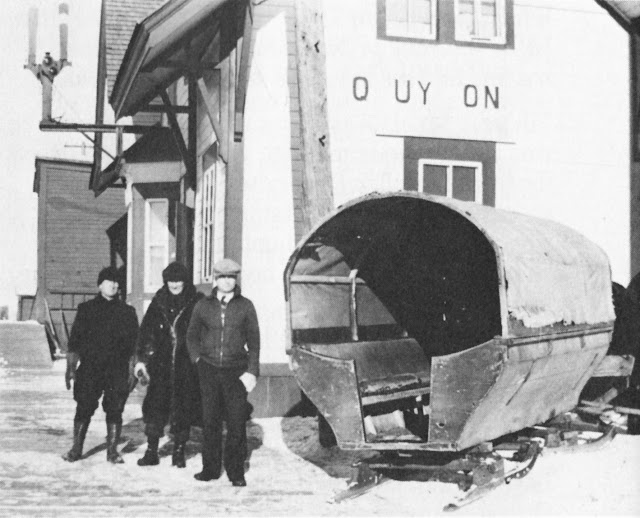 "When the Canadian Pacific was pushing a line through on the Quebec side of the Ottawa Valley from Ottawa to Waltham, Quebec, towns along the way fought to have the line go through their town, for obvious economic reasons.  Shawville won the political battle but Quyon lost.  The result was that for over eighty years a taxi service had to carry passengers from the Quyon CPR station to Quyon village proper, a distance of one mile.  This is a 1920 photograph of the old Quyon horse-drawn taxi in front of the Quyon station.  Left is Alex Lepine, section foreman, then Lally Lusk, bus owner and station agent.  The Lusks, early settlers on the Eardley Flats, gave their name to the present-day town of Luskville.  Wheels were put on the taxi for summertime.  For many years the old Quyon station, a large and spacious one with all its furnishings intact, including the telegraph office and the ancient and colourful wig-wag signal seen here in the photograph, sat vacant while pressure was exerted on the Town Fathers to restore it as a heritage site.  Finally it was sold for a dollar and trucked off, the fate of so many of these storied and memory-filled railway stations along the line."

For more Ottawa Valley railroad memories and photos, visit Picturing the Past.
Posted by The Duke at 9:48 PM