Sometime in the last couple of months, I was in a used building supply store and saw this NOS soldering iron element in its original box for a few bucks: 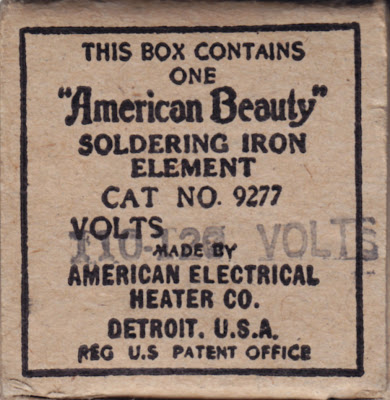 I bought it and found to my delight that I already owned the soldering iron (No. 3178) that it was designed for!  The iron is a huge beast of 300 watts capacity.  I don't think I've ever had a job big enough to use it.

The American Electrical Heater Company was founded in the late 19th century in Detroit.  It would seem that soldering irons were one of their first products, shown at the 1893 World's Fair in Chicago.  As the story goes, a newspaperman was so impressed with the iron that he called it "a true American beauty" and the name stuck.  The company also pioneered the concept of the electric toaster when George Schneider, one of their employees, took out a patent for one.  According to the Toaster Museum Foundation, however, the company may never have produced a toaster as no examples are known to exist.  (The Foundation has recently been acquired by the Henry Ford Museum.)

I have to wonder if there was any connection with the manufacturers of the Canadian Beauty line of electric heating appliances.

The company also built a beautiful plant known as the American Beauty Ironworks Building where it manufactured electric irons until 1995.  This was designed by the celebrated Detroit architect Albert Kahn, who also designed the Kale Building, the Fisher Building, the Packard plant, and the Edsel and Eleanor Ford House in Grosse Point Shores. 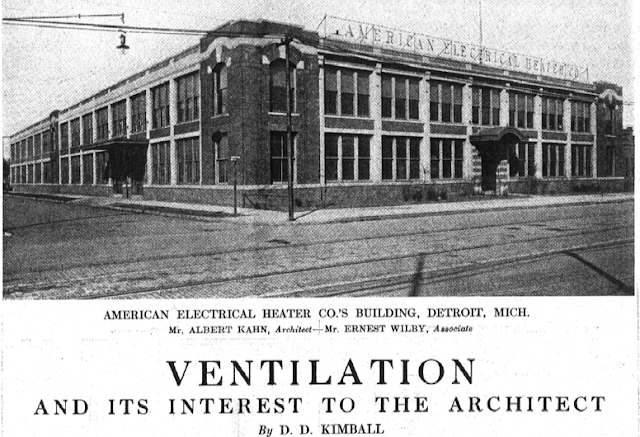 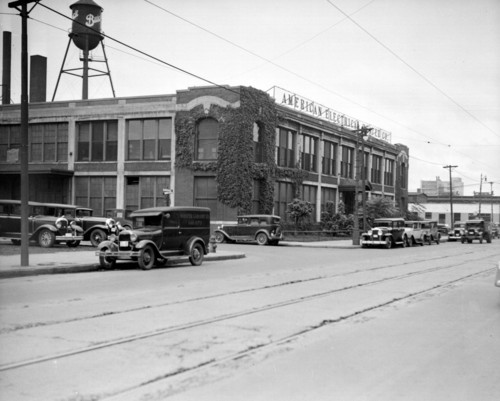 (At the time of this writing, the American Beauty building was being demolished by Wayne State University to create a parking lot.)

While it no longer makes the range of consumer products that it once did, the company itself still exists under the American Beauty name, now specializing in soldering irons and also offering a repair service for its previous products.  According to its website:

"Historically, manufacturers had whole departments setup to maintain their tools, but as budgets tightened and these departments were eliminated, tools that were meant to last a decade were tossed in the garbage just like cheap imports.

After we learned from a customer down in Texas that they regularly discarded dozens of older soldering irons each year because they simply didn't know there was an alternative, we knew we needed to act.   We expanded our internal repair department and reassigned our most experienced technicians to work on repairs.  We implemented customized software to ensure accurate processing of all returned products, from door to door.  And we started getting the word out!    For years, we had quietly assisted the occasional customer who needed help bringing their tool back to life.   Now we boast about our world class repair and refurbishment service to anyone who will listen."


If we don't want to completely fill the world with garbage and leave future generations nothing, we desperately need a return to that kind of business ethic and practice.  I wish them the best of success.

Thanks for the comment, can you send a picture?

I worked in the front office of American Electrical Heater Company in the 1970's. It was like working in a museum. The production floor was amazing, with massive leather bands driving production wheels, an setting appropriate for the The Henry Ford Museum. I am so thrilled to find these photos and wish that production floor photos survived.

Any pictures or stories you can find, please send them in, I'll post them!