We used to make things in this country. #49: Acme Ruler & Advertising Co., Toronto

I love old wooden rulers, which are getting scarcer every year.  They make great paint stir sticks, which means that many of them ended their life in a paint or varnish can.  All of the rulers below are marked "Acme Made in Canada." 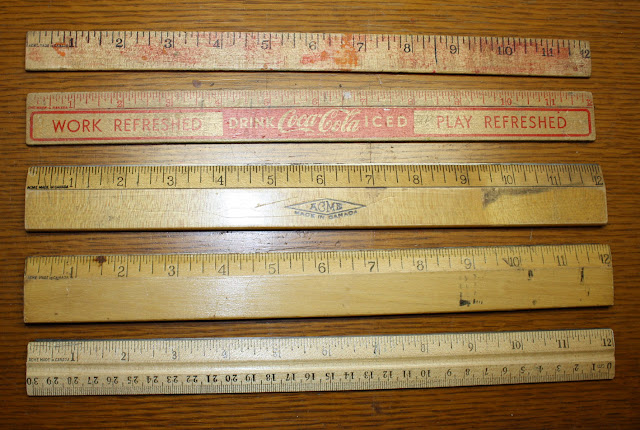 The Acme Ruler and Advertising Co., Ltd. of Toronto, Ontario was established in the 1890's and made rulers, blackboard triangles, and protractors.  It also made cribbage boards.  Below, two of their products from the 1950's or 60's: 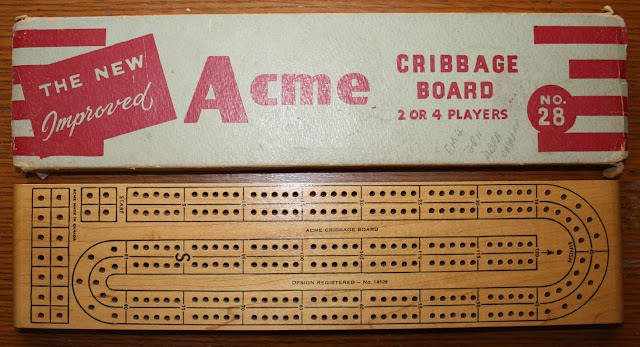 (The helpful folks at the Cribbage Board Collectors Society (CBCS) were able to establish that the Aristocrat Junior board was in fact made by Acme Ruler & Advertising.  They inform me that, according to Bette Bemis' Book, Cribbage Boards 1863-1998, Acme originally distributed and then made boards designed by Glanson Games in New York City, one of the largest producers of such items.  Later, Acme streamlined the ends and sides of the tracks on its own boards.  Acme also distributed the unusual round "Threelane" wooden boards made by the H.A. Sicotte Manufacturing Company.)

The company's height was from the 1950's to the early 1970's.  According to the Cribbage Board Collectors Society, Acme successfully made the transition to plastic, offering several boards in this material, including a British Columbia Ferries edition.  The ultimate fate of the company was clarified by cribbage instruction pamphlet: 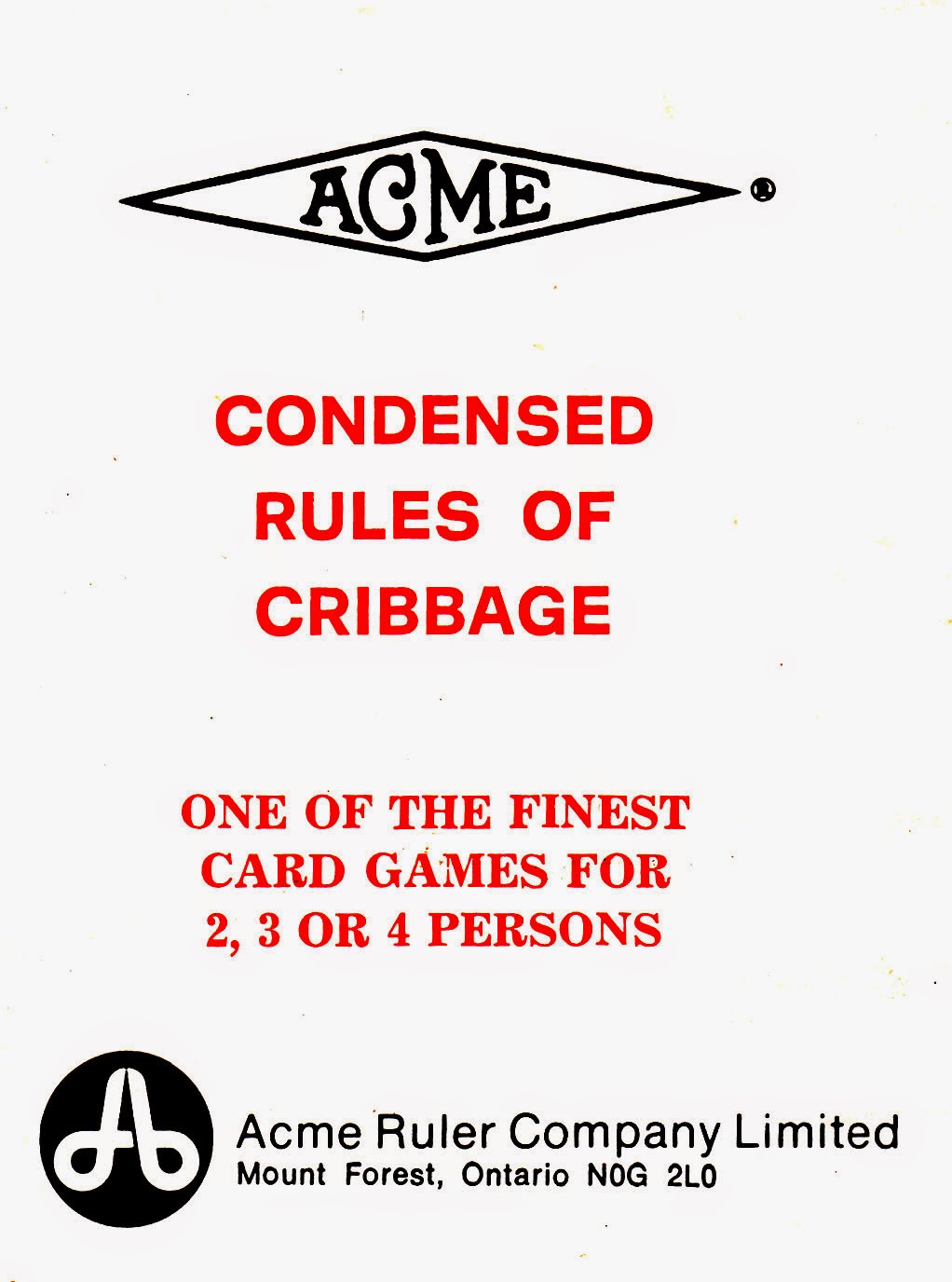 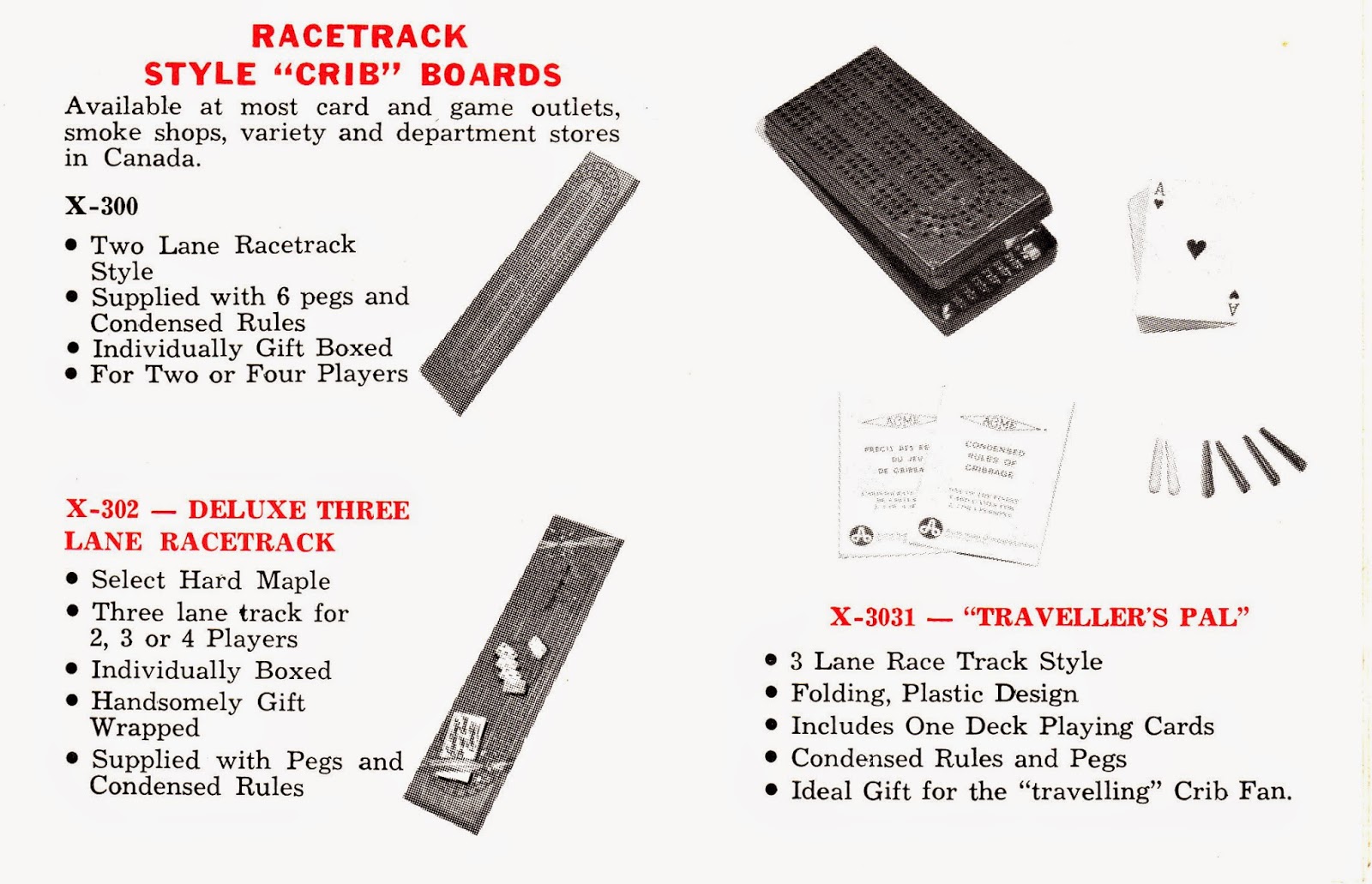 This shows both the Canadian Acme diamond trademark and the stylized scissors trademark of the U.S. based Acme United Corporation.  This American company was formed when the Acme Shear Company of Bridgeport, Connecticut acquired the Westcott Rule Company of Seneca Falls, New York in 1968, three years later becoming Acme-United.  They filed for their scissors trademark in 1973.  So, it would appear that the Acme Ruler and Advertising Company was itself also acquired by Acme United at some point, becoming the Acme Ruler Company out of Mount Forest, Ontario.  (Are you confused yet?)

Under American ownership, production was inevitably moved off shore.  An Acme United ruler is shown below (clearly identified by its logo).  It's marked "Acme China" and is of much cheaper quality than any of the Acme Canada rulers.  (Sigh.)

The similarity in company names is purely coincidental.  Everyone remembers Wile E. Coyote's spectacularly unsuccessful attempts to dispatch the Roadrunner using "Acme" products in the Warner Bros. cartoons.  Duke University holds the Richard Pollay Acme Advertising Collection, with around 3000 items bearing this name from the 1850s through to 2006.  It turns out that over 900 companies used this name in the U.S. and Canada, including: Acme Bail Bonds; Acme Boots; Acme Brick Company; Acme Harvester; Acme Markets; Acme Motor Truck Company; Acme White Lead and Color Works; Duane H. Nash, Inc.; Lautz Bros. and Company; and Warner Bros.  An example below:

Below, an example of the Canadian Acme family:  metal shears. 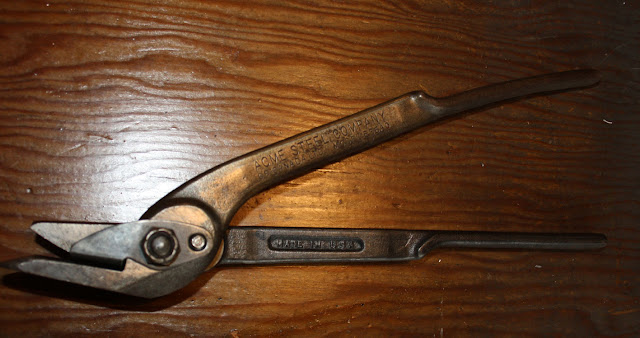 Acme Ruler Company was located in the east end of Toronto, just west of Coxwell on the property north of the train tracks that was demolished to make way for Monarch Park H/S in the early 1960s. I remember rummaging through the abandoned factory with my friends, when I was about 8 yrs old. I still have a cribbage board that I rescued from the rubble. 50+ years later it is still in great shape!

Hi, Congratulations for keeping Acme Ruler rocking! Grandaughter of Clara B. Pribble, owner until the '60's. The house I am living in is 1/3 or her estate. My Dad worked there until his death at age 42, Ralph Pribble. Keep me up to date and prosperity, Kindred Ones!

I have an Acme Ruler 6" with unusual shape. Looks like it could be a letter opener as well although it is wooden. Unsure where it came from.

have an old " The Traveller's Pal" and am trying to date it. I has a crib board inside as well as poker chips White Blue Red. Also has the "Condensed Rules of Cribbage" and "How to play poker" small booklets. It is in a 3" x7 3/4" silver top and black bottom box. Crib board is dark brown. Any idea when this was manufactured

Try asking the folks at the Cribbage Board Collectors' Society. They're on the web.

My partner remembers the Acme Ruler works being a old, one-story brick factory at the corner of Victoria Park and Gerrard Streets, around the corner from the house he grew up in. By the time I moved to Toronto in 1984, the lot was occupied by a supermarket, and is now a gas station. I wonder if, when they sold out their Coxwell plant in 1962, Acme moved into an existing factory on Victoria Park. They must have sold out to Acme United not too many years before I arrived in the neighbourhood.

Thanks! I'll see if I can find any pictures from Toronto Archives.

My Dad worked at Acme Ruler for as long as I remember. When it moved from Toronto To Mount Forest we moved too. I was 17 at the time. It was hard on me leaving Toronto. The city slicker hippie to the country. became good friends with my neighbour Ray. Ray wore a cowboy hat (and still does). The cowboy and the hippie ( yup still have long hair)….I know there`s a movie in there some where eh?. Finished high school there, well in Palmerston. Mt Forest didn't have shops. Learned how to drive a standard in Rays 59 Chevy. He had two of them. Plowed fields, built a hay wagon. My first time in a barn was an early morning. Sun shinning through the slits, and Morning Doves flying around. What a site to see. Have had a fascination with barns and small towns ever since. Its the middle of winter, "do you heat this barn?" " no its from the animals city boy" Tom McCaw

Yo. Tom's sister here. Yes, we moved with the factory in 1972 to MoFo. It was a huge change for us city slickers. Both of my parents worked at the factory on Sligo Road to keep a roof over our heads, and to send me to college several years later. It employed a lot of people in this community of 3200 or so at the time. I now live in Vancouver, but I got a package today from ACME in Mount Forest, and needless to say, it sparked some memories.

Thanks for the comments and city slicker stories! Thanks also for the moving date and details.

I grew up in Mount Forest. Many shops then, and lots more now. My mom worked at Acme Ruler for mamy years. Wé always had mamy rulers, scissors and cribbage boards in our house.

Random, I live in New Zealand and we've had this ruler for years. I just googled the logo and found this page. Who knew rulers had such a strong history!